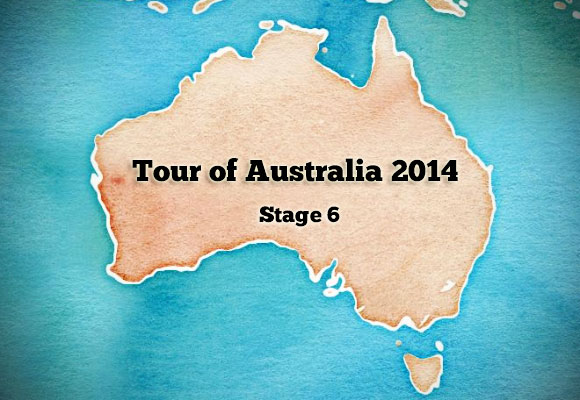 Inspired by the Giro d’Italia, the Tour de France and the Vuelta a Espana, the Tour of Australia is a fictional three-week Grand Tour route created by David Blom and Matt de Neef to showcase some of Australia’s best cycling roads. This is the second year of the race and today we reveal stage 6 of the 2014 edition.

Stage 6 of the 2014 Tour of Australia starts in the city of Dubbo, home to the Taronga Western Plains Zoo, before heading south east down the Mitchell Highway. It’s a largely flat start before the first intermediate sprint at Wellington, 50km into the stage.

The first of three categorised climbs for the day — this one a largely gentle fourth category ascent — peaks after about 68km and after descending off the climb the riders head south after 72km.

The stage profile shows a mostly uphill parcours from 72km through to the highest point of the stage after 177km, but it’s only a gentle rise that will be barely noticeable to the riders. There are a few lumps here and there, but nothing worthy of any KOM points and certainly nothing that will put any riders in great difficulty.

The day’s second intermediate sprint point comes after 144km, in the city of Orange, at which point the riders start to head south east towards Bathurst. There’s a 10km-long descent and a 2km, fourth category climb on the approach to the town after which the riders head for what is arguably the most famous location in Australian motorsport: Mt. Panorama.

The riders finish stage 6 with a lap of the circuit used in the famous Bathurst 1000 endurance race which includes a very challenging 2km stretch at an average of 8%, but with ramps well in excess of that.

From the top of that final climb (a second category ascent given its proximity to the finish) it’s just three kilometres to the end of the stage, all downhill and with a very fast run in to the finish.

This is a stage for the opportunists. A break will be allowed to get away early in the stage and, with all likelihood, it will be brought back on the approach to Bathurst, ensuring that the final climb up to Mt. Panorama will help decide the stage.

There will be a whole host of attacks on the hill with riders trying to get clear ahead of the final descent. It could be that a select group of five or so riders crests the hill together and brings it down to a sprint on the finishing straight. It’s the sort of finish that suits someone like Simon Gerrans quite well.

The GC riders will probably finish a little way behind the stage winner; minimising their losses but not contesting a stage that will have little impact on the overall.

The first of three rest days in the 2014 Tour of Australia follows stage 6, with the race resuming on the Friday.