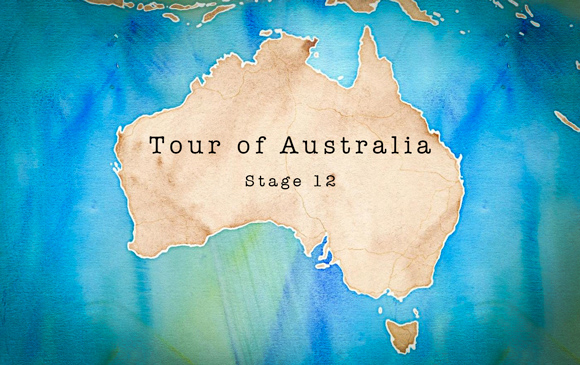 We’ve put together a course for a three-week race that takes in some of the best roads in the country in an attempt to create cycling’s fourth Grand Tour: the Tour of Australia. We’re currently revealing one stage per day in the lead-up to Le Tour and we’re up to stage 12.

After finishing stage 11 atop Mt. Hotham the teams and the Tour caravan will transfer to the beautiful alpine town of Bright. You could argue that Bright is the cycling capital of Victoria, particularly if you like climbing, and it only seems right that a Tour of Australia stage would visit this popular town.

Rolling north west out of Bright along the Great Alpine Road the riders will enjoy a flat start to stage 12. The road barely rises in the first 30km to Myrtleford at which point the riders will contest an intermediate sprint point before turning right and heading north east.

There’s a long but gradual rise on the way to the quaint historic town of Yackandandah from which the riders continue north east towards the tiny township of Tangambalanga. After contesting an intermediate sprint here, after 93km, it’s on to Tallangatta at which point the riders take a left-hand turn and follow a small bridge over Lake Hume.

After 120km of racing and after crossing the bridge the riders head west along the shores of the lake and take on a couple of 2km-long uncategorised climbs. The first of these climbs is on a 7.4km long unsealed section of road but if the Tour were to happen, it’s not unreasonable to expect this road would be sealed specifically for the race.

After descending back to the shores of Lake Hume at the 150km mark, which, at this point is also the Murray River, the riders head north and into New South Wales for the first time in the Tour.

Just over the border, in the tiny community of Bellbridge, the riders take a left over a stunning little bridge. From there it’s only 20km to the finish in Albury and apart from a couple of short rises just after the river crossing, the run in is virtually all flat.

The stage finishes in the centre of Albury, in front of the old post office on the corner of Dean Street and Kiewa Street.

It’s hard to see this stage ending in anything but a bunch sprint, despite the two short climbs roughly 40km and 30km from the finish. They’re both about 2km at 5% which isn’t insignificant, but with plenty of time for dropped sprinters to get back on terms, it’s bound to be a stage for the fast men.

Then again it’s the sort of stage that might suit a bold breakaway attempt on one of those two short rises. Imagine Fabian Cancellara throwing everything at the first climb, hitting the second climb with a small group behind him, cracking his pursuers at the top of that rise, then time-trialling into Albury for the win. Kinda like he did in the Tour of Flanders earlier this year.

Stay posted for stage 13 of the Tour of Australia, coming tomorrow.