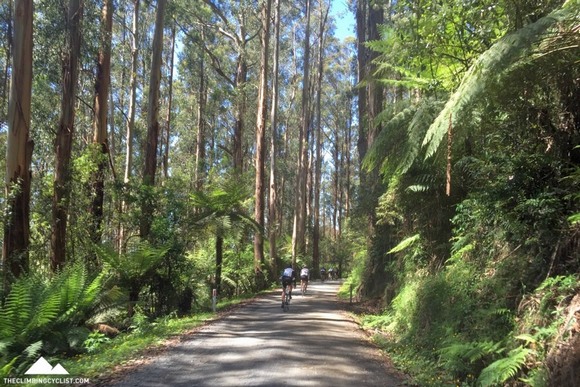 Whenever you pull together a new cycling event it’s that first year that’s always the toughest. Will the authorities approve the various permits? Will everything go as planned? Will the weather behave itself? And, most importantly, will the participants have a memorable experience?

Ensuring that first edition is successful is vitally important in securing the longevity of the event. In recent times there have been several events that haven’t lasted beyond a single year, for various reasons. But if the reaction to Sunday’s inaugural Giro della Donna is anything to go by, this is one event that might well be part of the Victorian cycling calendar for some years to come.

Full disclosure for those that aren’t aware: my day job is at CyclingTips, the organisation behind the Giro della Donna. And while my own involvement in the event was only minimal, it was still a wonderfully satisfying experience to be part of. 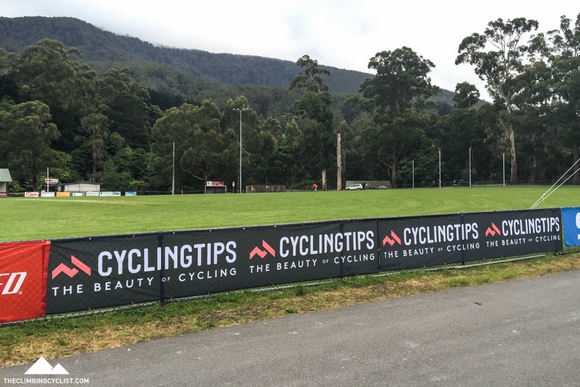 Even seeing CyclingTips branding at the start village in Warburton was strangely satisfying.

On paper the Giro della Donna attendance figures mightn’t look that different to our most recent Domestique 7 Peaks ride but the former required an entirely different level of organisation. Rather than a being held on a single, 21km stretch of road, the Giro della Donna was run on 120km worth of road with road closures and a whole heap of other traffic management measures in place.

We had an events management company helping us out with a lot of the logistics but there was more than enough work to be done at CT HQ as well. This mainly fell to my long-term collaborator and good friend Andy van Bergen who did a truly stellar job in pulling everything together from our end. It’s always a pleasure to watch Andy in full flight and even more so to work with him.

Being a small organisation there were times when all of us at CT needed to pitch in and get things done. There’s something very satisfying about everyone working together for a common goal and, ultimately, delivering a final product that was just about as successful as we could have hoped for. 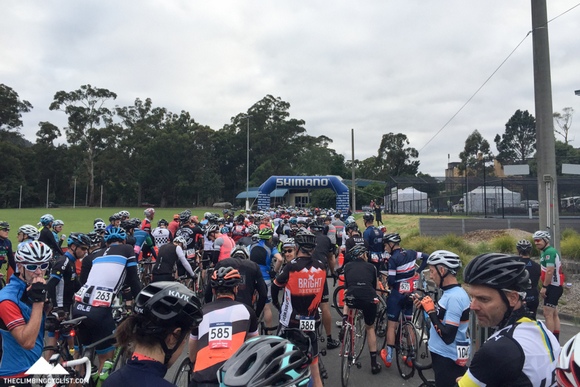 About to get under way in Warburton.

While my colleagues Andy and Jonathan were stuck back in the event village on the day, my boss Wade, my colleague Anne-Marije (editor of our women’s site, Ella) and I were all able to turn up, take part in the event and enjoy ourselves.

And enjoy ourselves we did.

It was a healthy sized bunch that set off from Warburton at 7am in cool but pleasant conditions, heading for the first climb of the day: Reefton Spur. Those first 20km of undulating roads reminded me somewhat of the start of Amy’s Gran Fondo and the dash to the Skenes Creek climb. Only this time the pace in the group I was in was decidedly friendlier and I was able to hold on comfortably as we approached the climb.

The group broke apart right away as we started the 20km ascent. Having ridden the climb a bunch of times I knew it was important to find a rhythm nice and early as it’s the first 7km that are the hardest. Some riders blazed away ahead of me and I didn’t see them again for the rest of the day; others went out too hard and paid for their exertions, eventually falling behind. 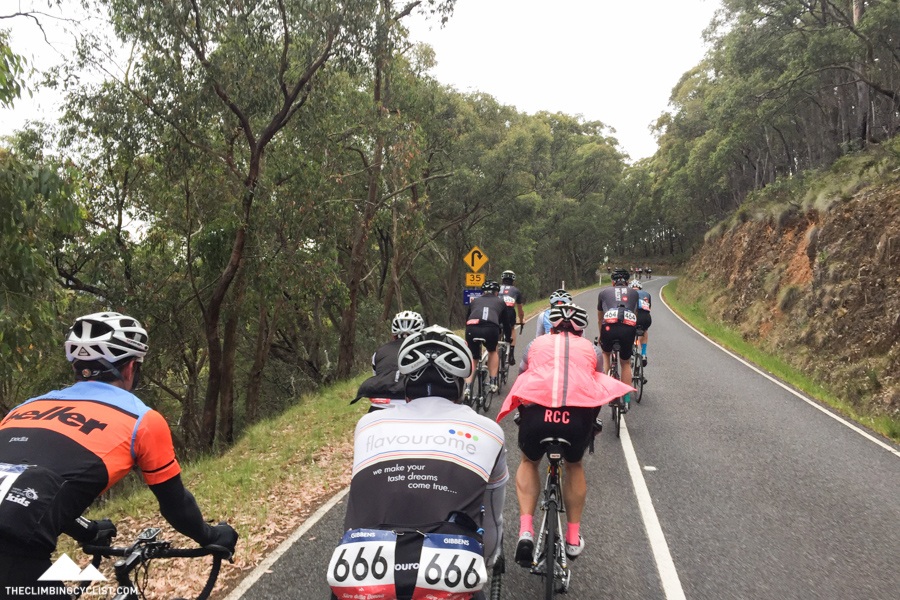 It didn’t take long for the Reefton Spur climb to sort the bunches out and break things right up.

I took things nice and steady knowing there was plenty of climbing still to come. But when I was a few minutes away from the top of the climb I saw that I was in with a chance of going under an hour for the 20km. It was a meaningless statistic — I wasn’t going to be able to beat my PB on the climb — but I found myself pushing hard in the last kilometre or so to break the hour. I succeeded, but I would pay for it later on.

The section from the top of Reefton Spur to the start of the descent into Marysville is a whole lot of fun thanks to a great, fast descent and some terrific scenery. It’s also a challenging bit of road with a couple of steep ramps including the steepest part of the whole course. I quickly regretted my aggression at the top of Reefton Spur as soon as the gradient hit the wrong side of 10%.

The descent into Marysville is always fast and it was with a little relief that I reached the rest stop in town having kept things rubber-side down. I didn’t stop for long — just long enough to fill bidons and grab a couple of energy bars. Then it was time to get back underway and head for the section of the course I was most looking forward to: Acheron Way. 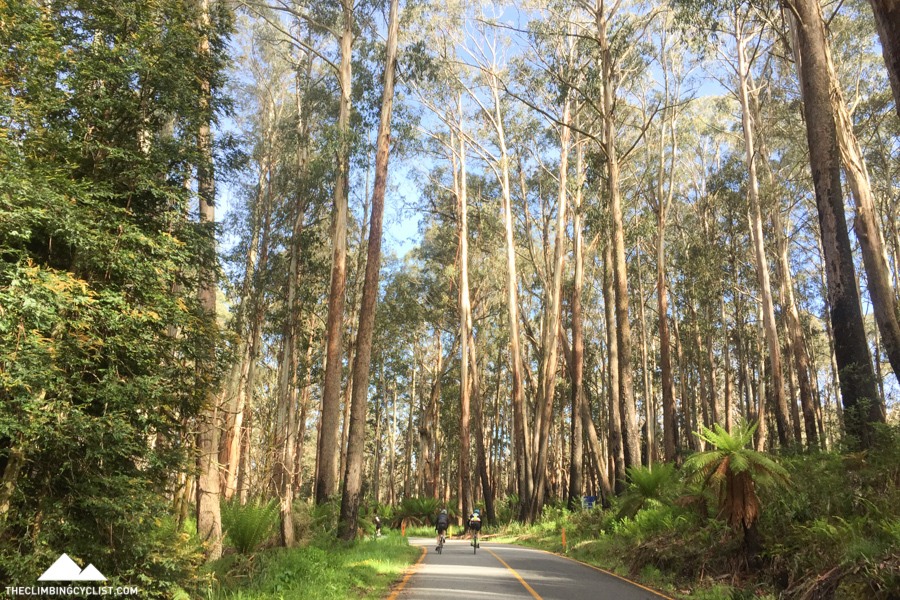 Among giants between Cumberland Junction and Marysville.

The moment you turn left onto the Acheron Way it’s like you’ve entered a different world. From a well-trafficked, open main road you go to a narrow one-lane strip of tarmac that winds its way through the most amazing native bush and temperate rainforest.

By this point I was well and truly riding by myself and I couldn’t see a group of more than three or four riders in front or behind. This suited me perfectly — I wasn’t under any pressure to work hard to stay with a group. Instead I could sit up, take a deep breath and enjoy a simply amazing stretch of road.

This break came at a perfect time as my legs were starting to feel heavy with fatigue. 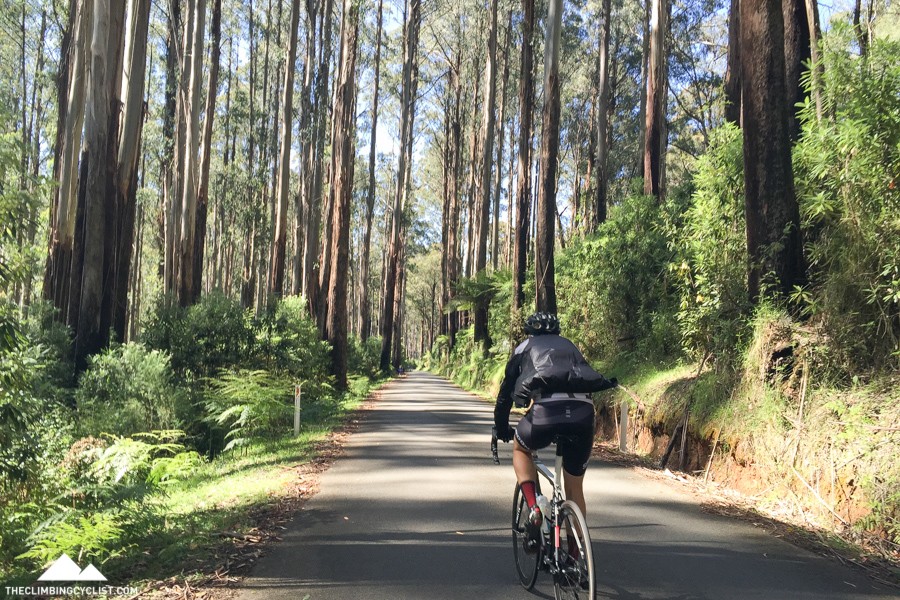 Hard not to enjoy riding the Acheron Way, particularly when the weather is so good.

After 85km the road turned to gravel and I suddenly felt like I had a new lease on life. I was looking forward to the unsealed section and pushing things along a bit.

I don’t know how many people I passed on that section but it was quite a few. Most people seemed quite tentative on the gravel (which is totally understandable) but with plenty of riding on unsealed roads lately, I was confident I could push things pretty hard and not be too worried about puncturing or losing traction.

I found myself thinking back to the bikepacking trip my mate Nick and I had done a few weeks’ earlier and how we’d managed to ride a very rough, rocky section of Grand Ridge Road with fully loaded bikes without incident. In that context the Acheron Way felt like it was sealed with smooth hotmix. 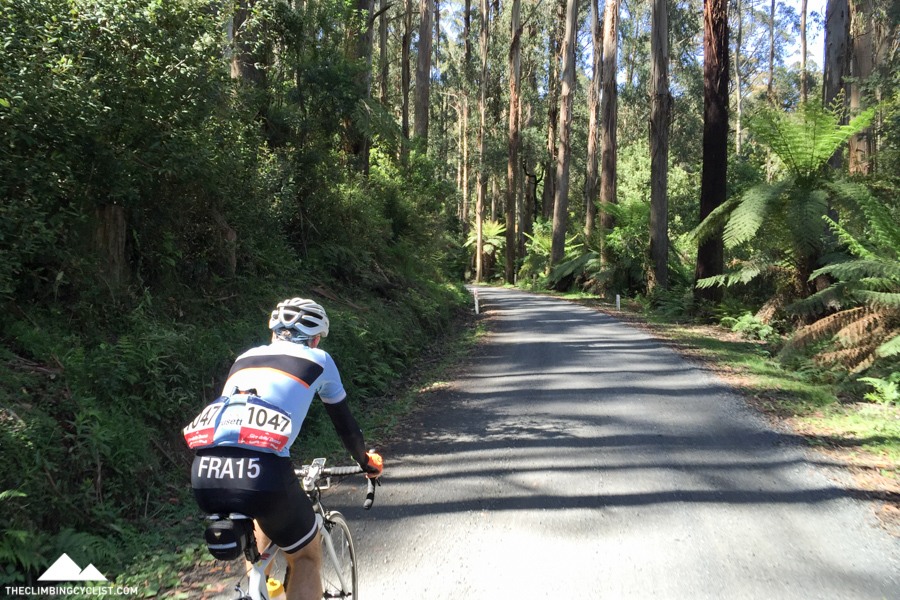 After 13km of gravel on the Acheron Way — half gently up, half gently down — I reached Cement Creek and the start of the final 9km to the summit of Mt. Donna Buang. I’d been feeling good for the past half hour or so but it didn’t take more than a few hundred metres of that final ascent for my legs to start reminding me that they already had around 2,000m of climbing in them.

In the following kilometres it went from tough to difficult and right through to painful. My speed slowed to a crawl and I found myself digging deep just to keep moving forward. 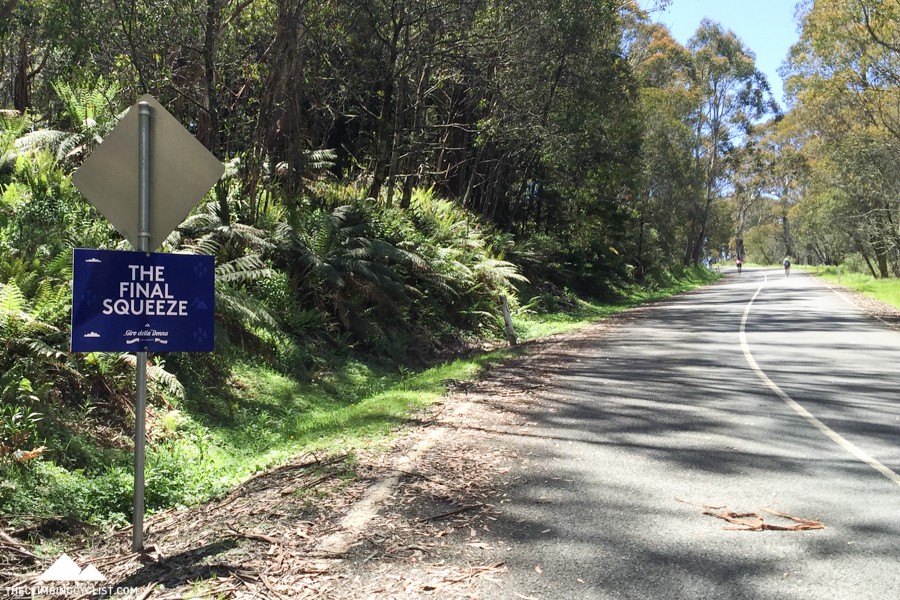 The final, steep ramp to the summit of Mt. Donna Buang.

I crossed the finish line after 4 hours and 35 minutes of riding with heavy legs and an undeniable sense of satisfaction. Sure, at ‘only’ 107km it wasn’t the longest sportif I’ve ridden but the amount of climbing involved was nothing to be sneezed at.

I filled up with water at the top then started the long and initially cold descent back to Warburton.

Big thanks again to Andy and Jonathan and the rest of the CyclingTips crew for ensuring everything went so well on the day. I can’t wait to start looking at how we can make next year’s event even better than it was in year one.

Click here to see my Strava file from the inaugural Giro della Donna. 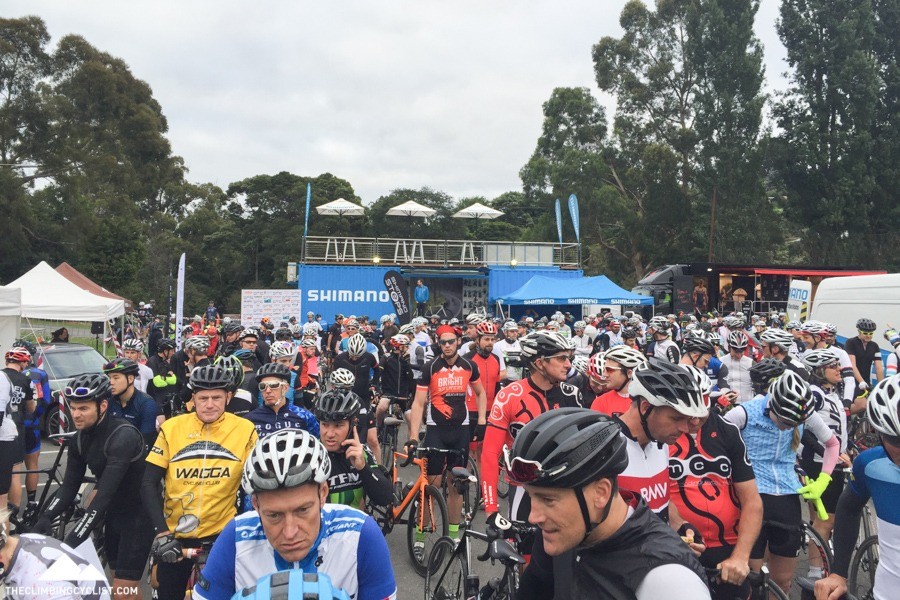 Looking back at the startline. 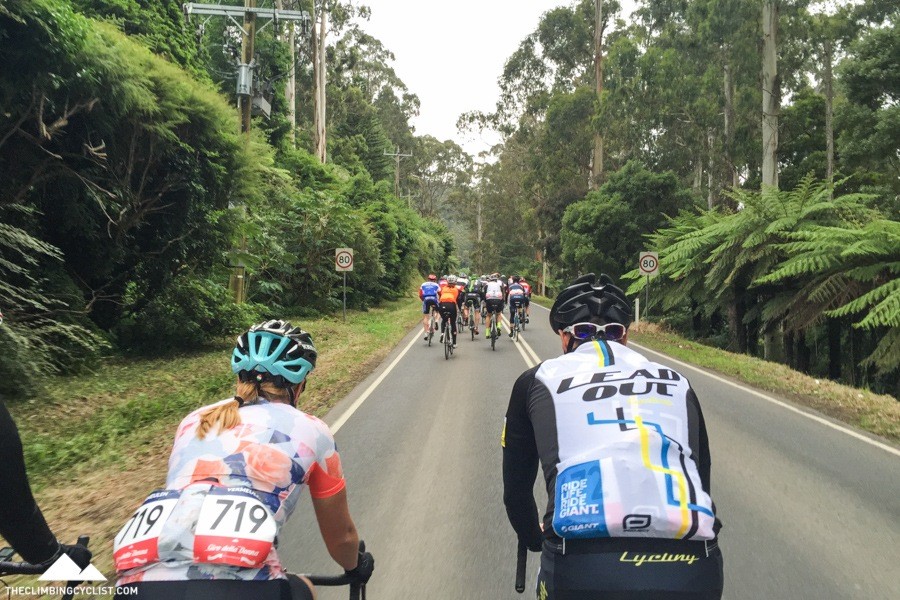 The opening kilometres out of Warburton. 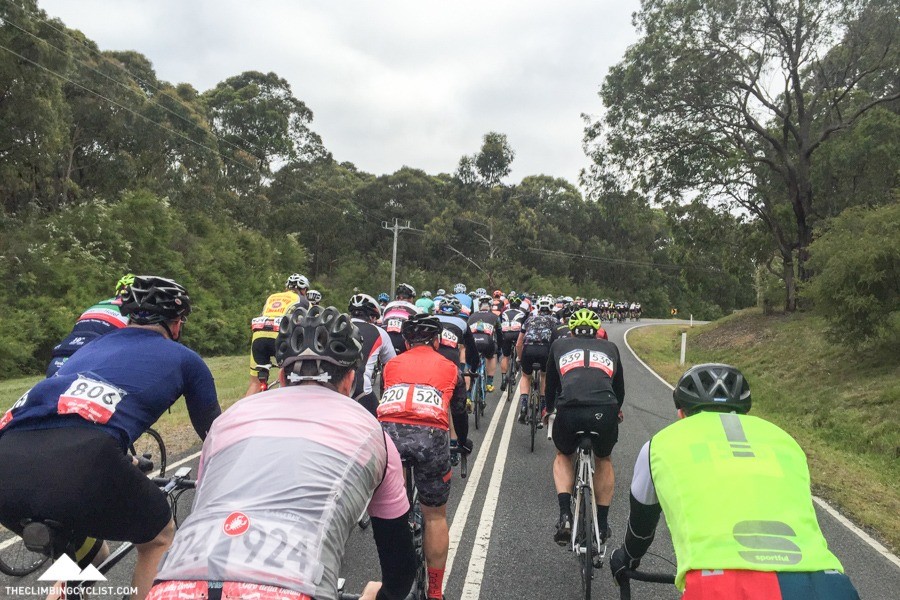 Heading for the Reefton Spur on closed roads. 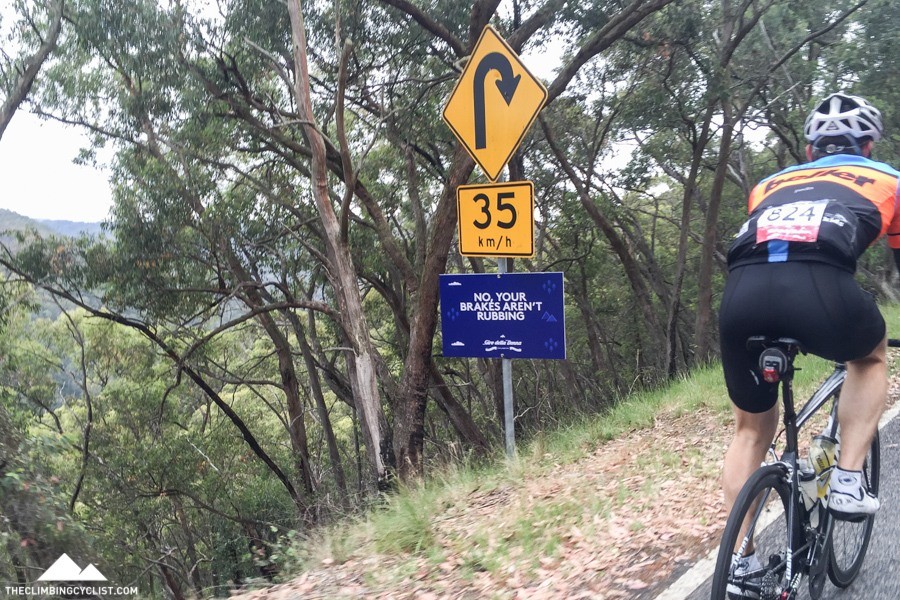 These blue signs were placed all around the course. The vast majority were written by Andy but this one was mine. 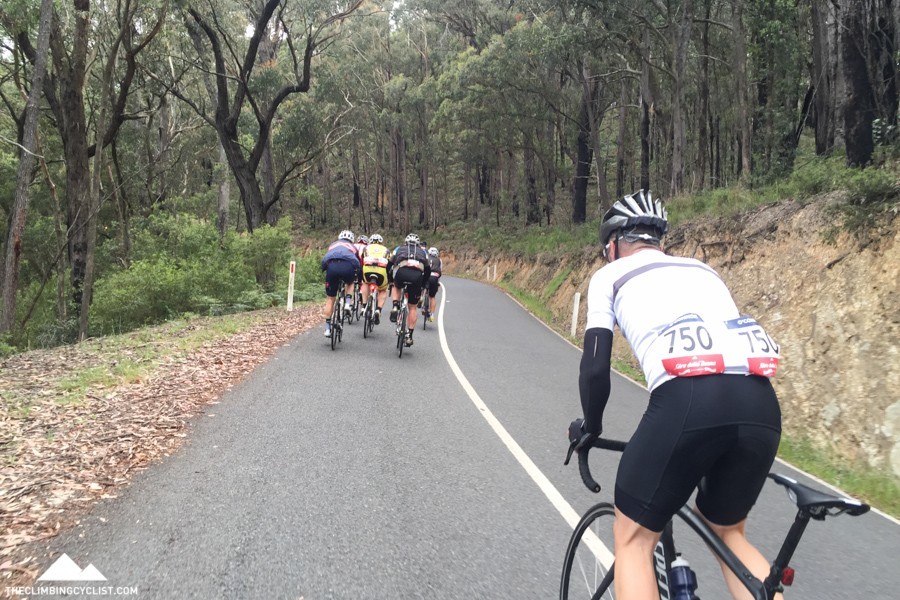 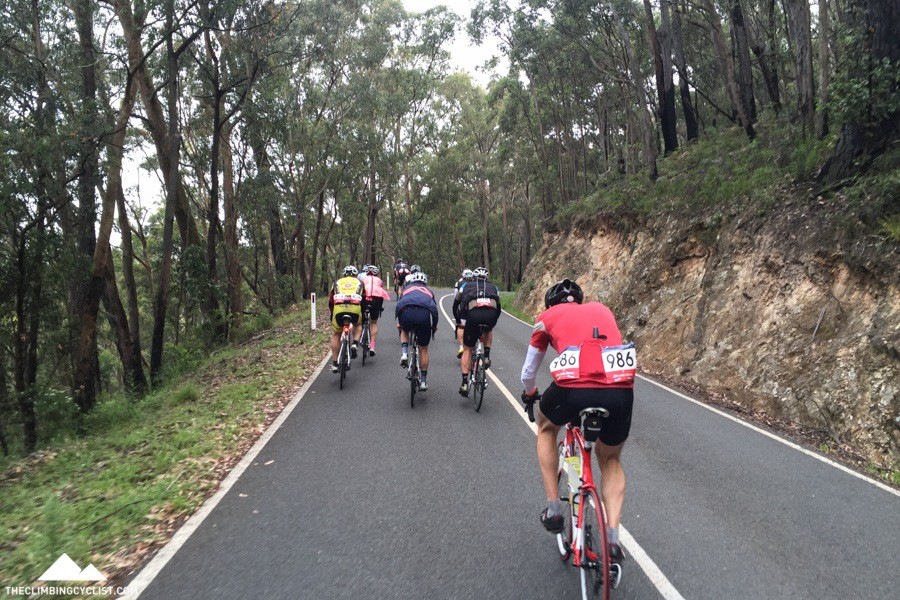 More from the Spur. 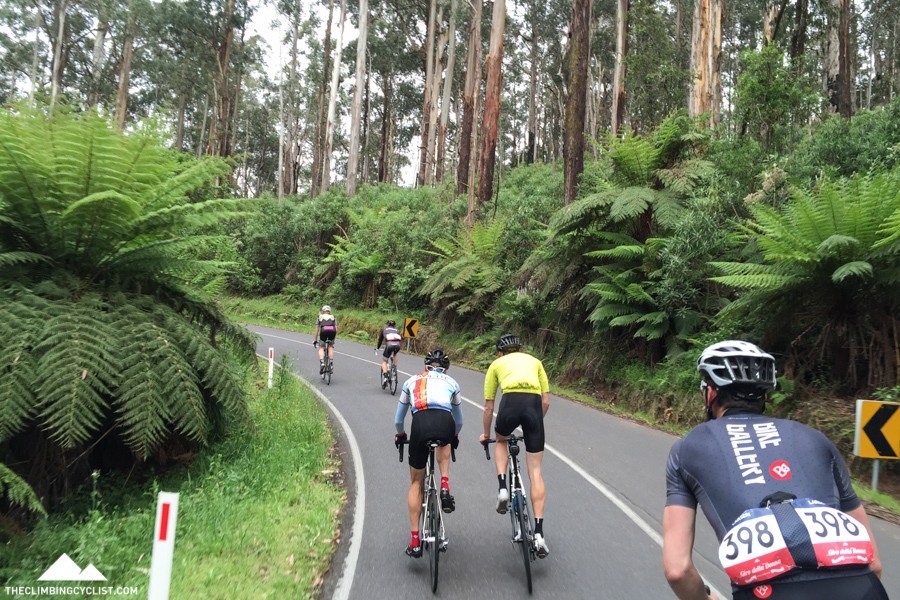 Nearing the top of Reefton Spur. 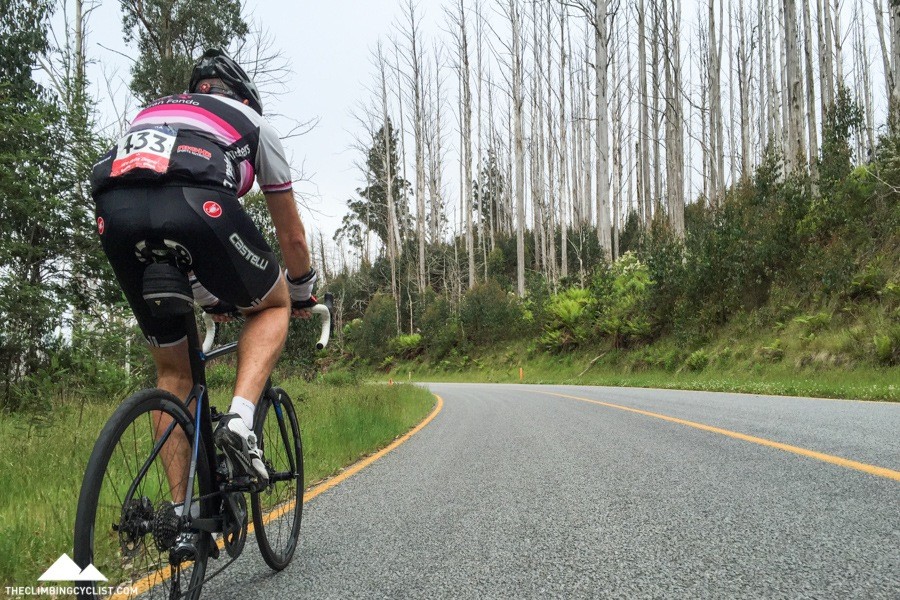 The road between the top of Reefton Spur (Cumberland Junction) and Marysville. 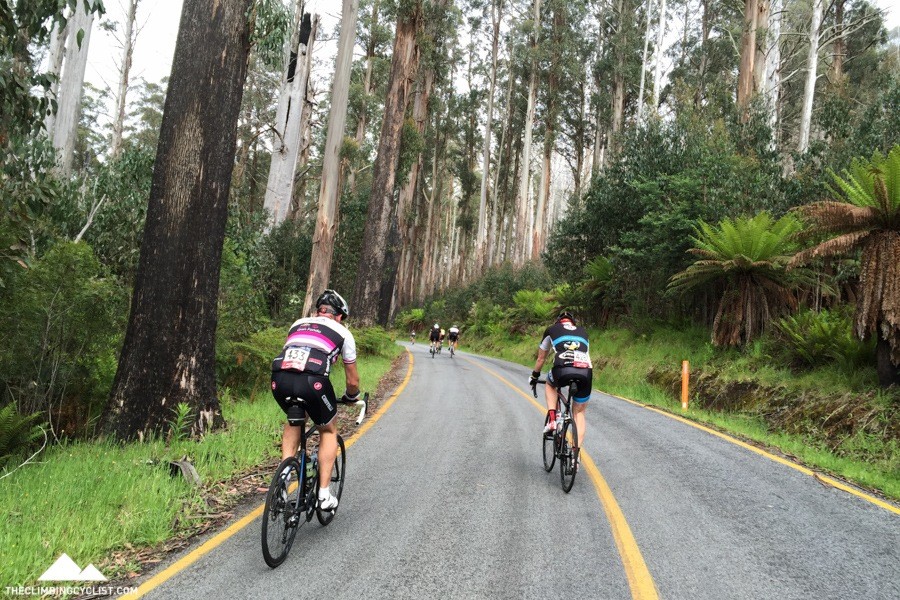 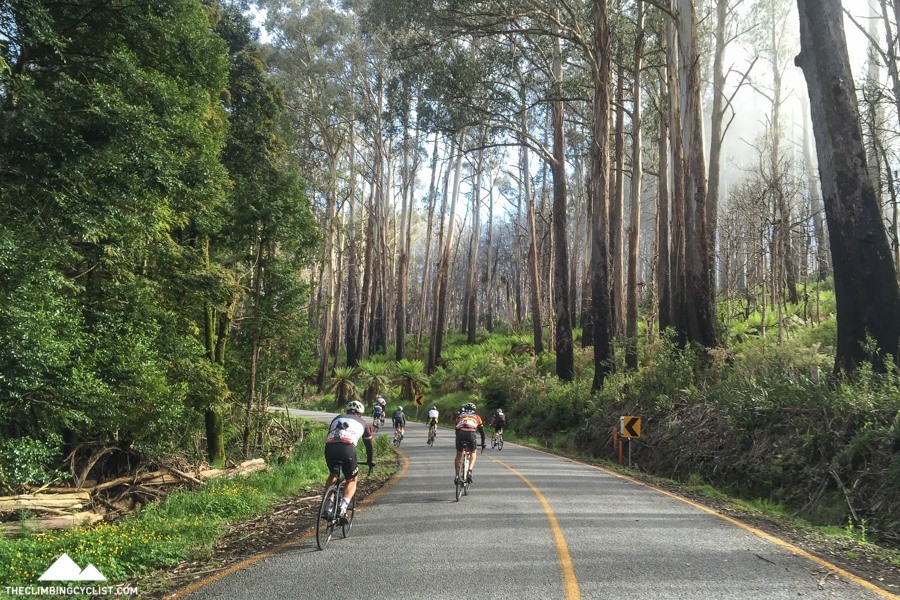 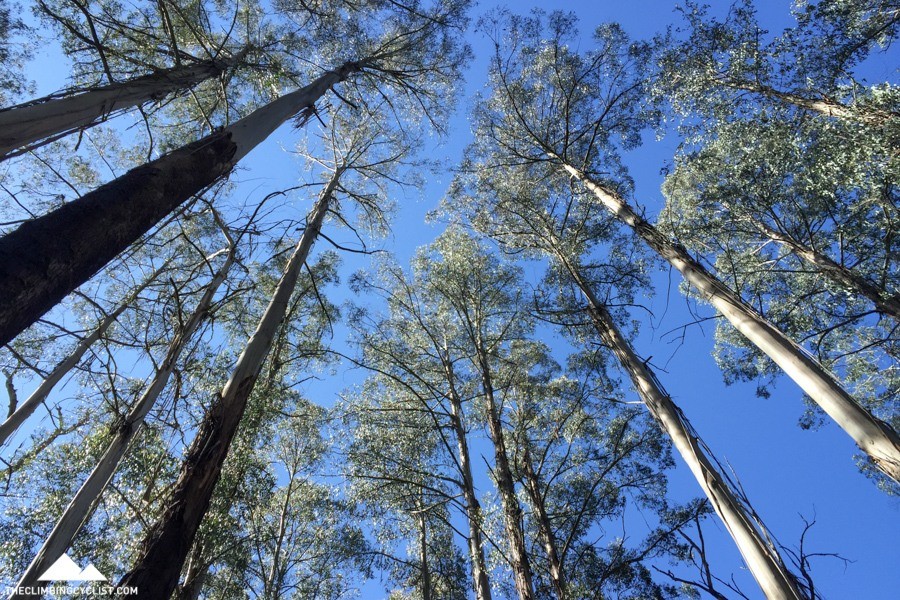 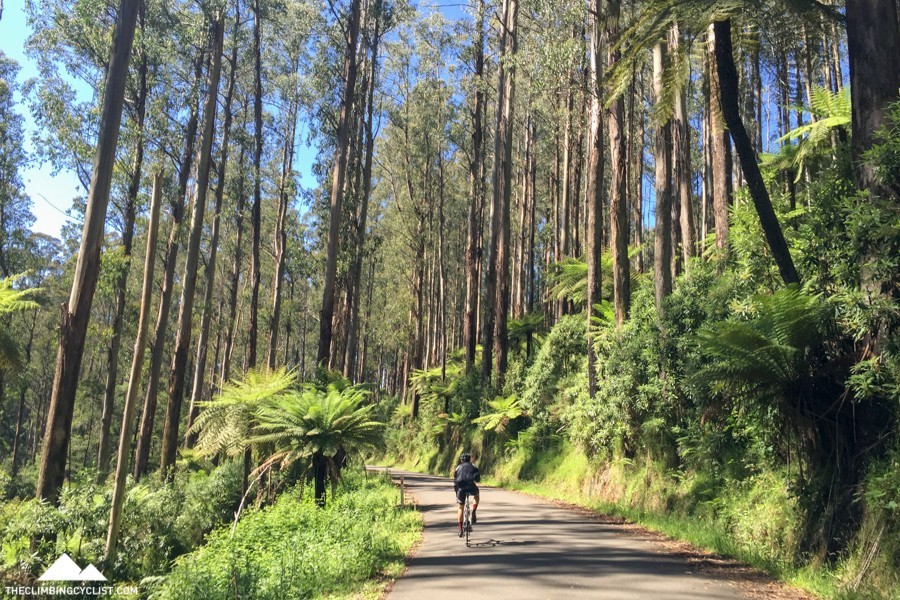 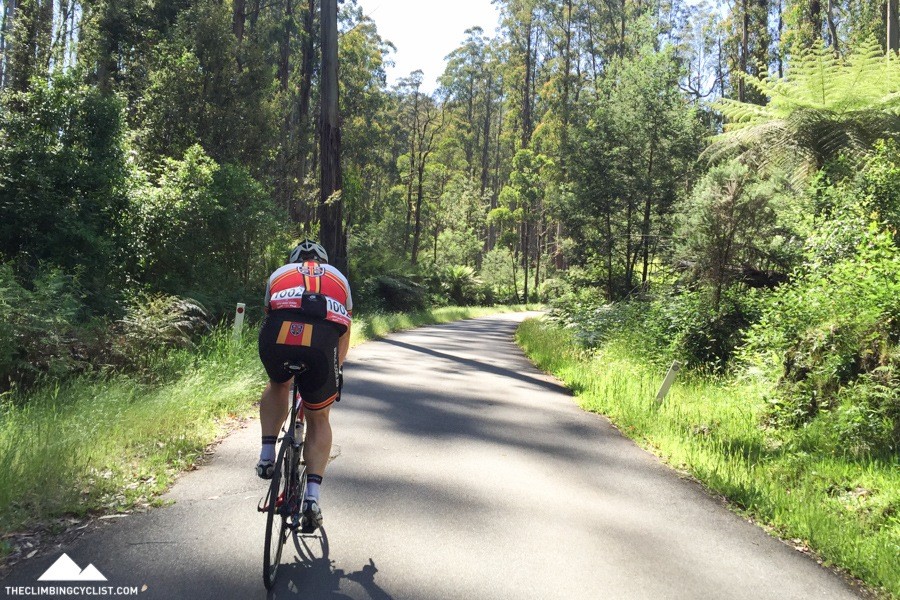 More from the Acheron Way before it turned to gravel. 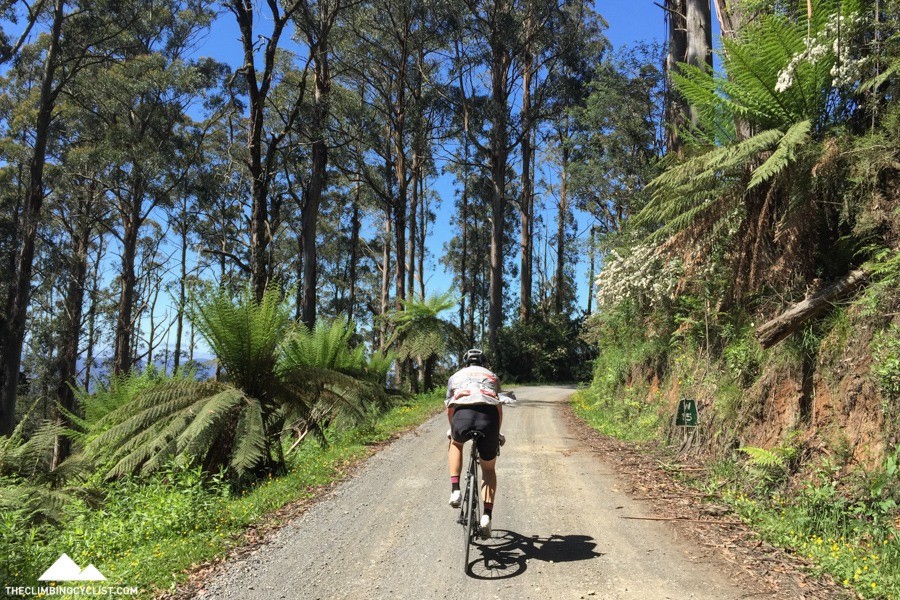 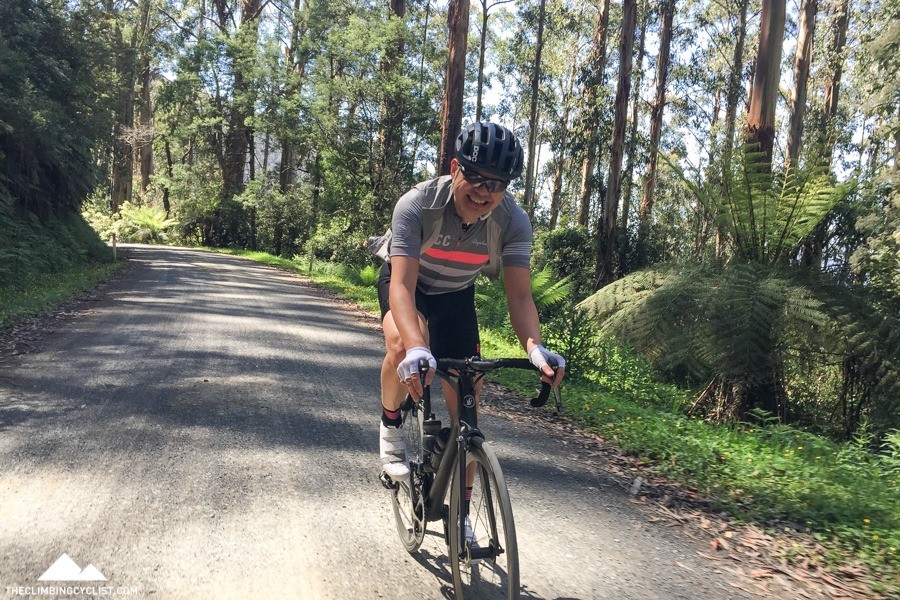 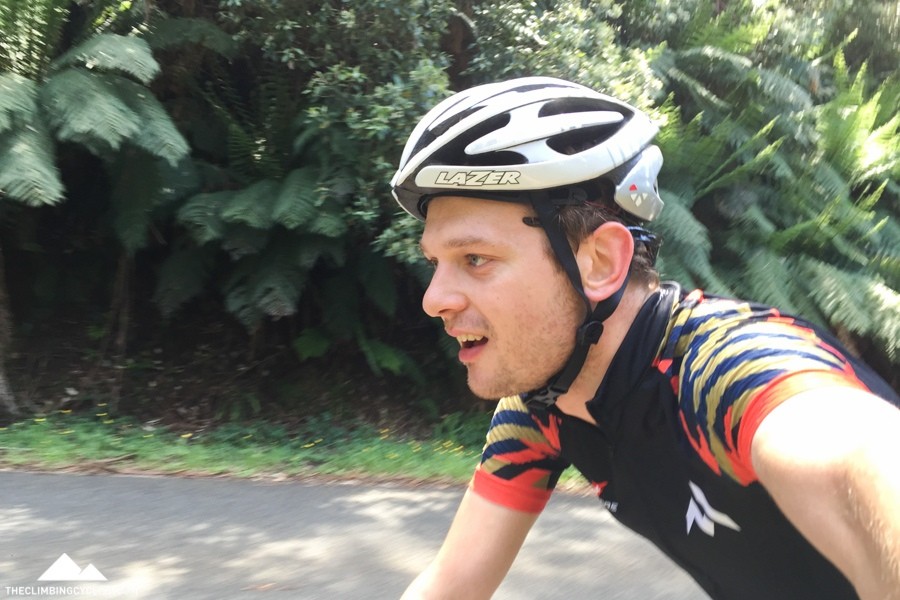 A cheeky selfie just after starting the Donna Buang climb. I can tell it was just after I started because I’m not grimacing yet. 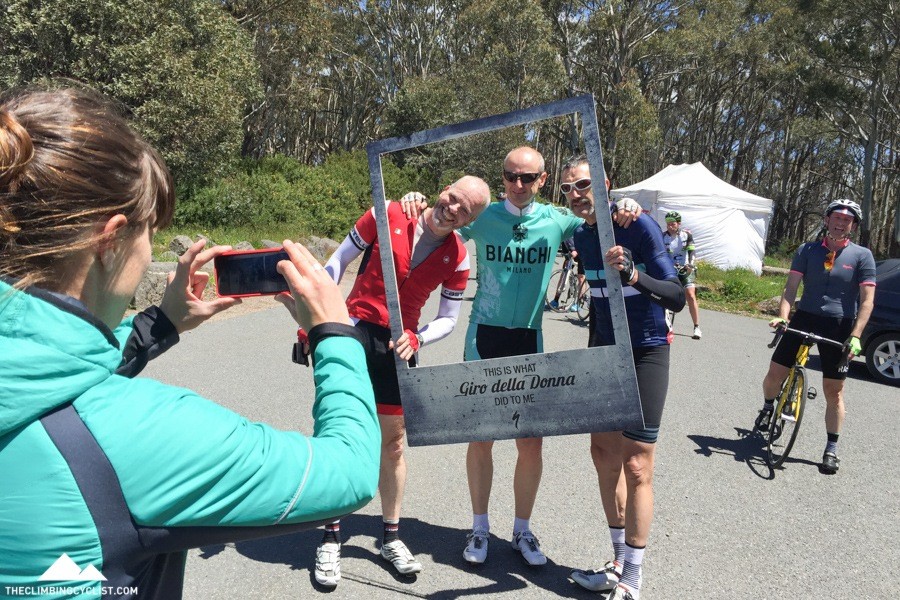 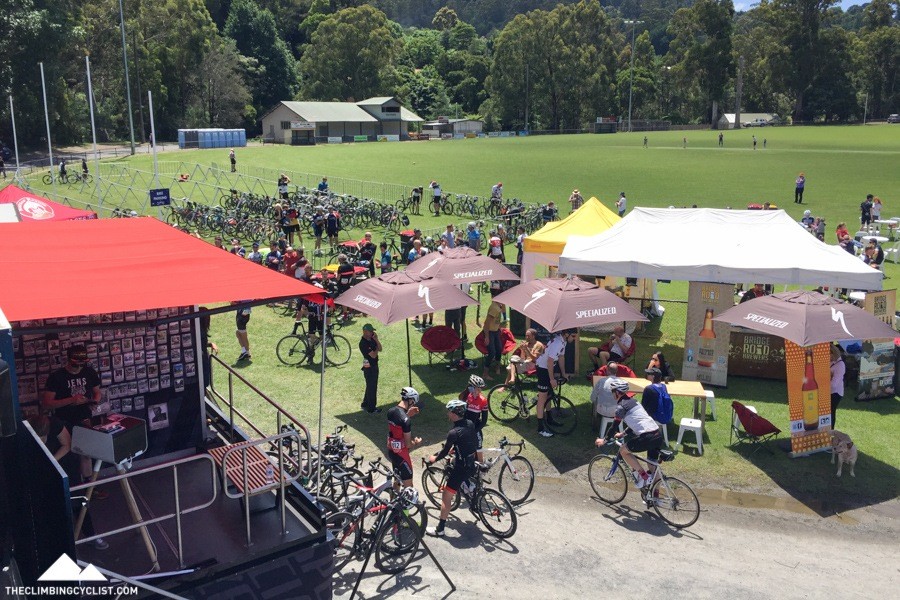 View of the post-ride event village. 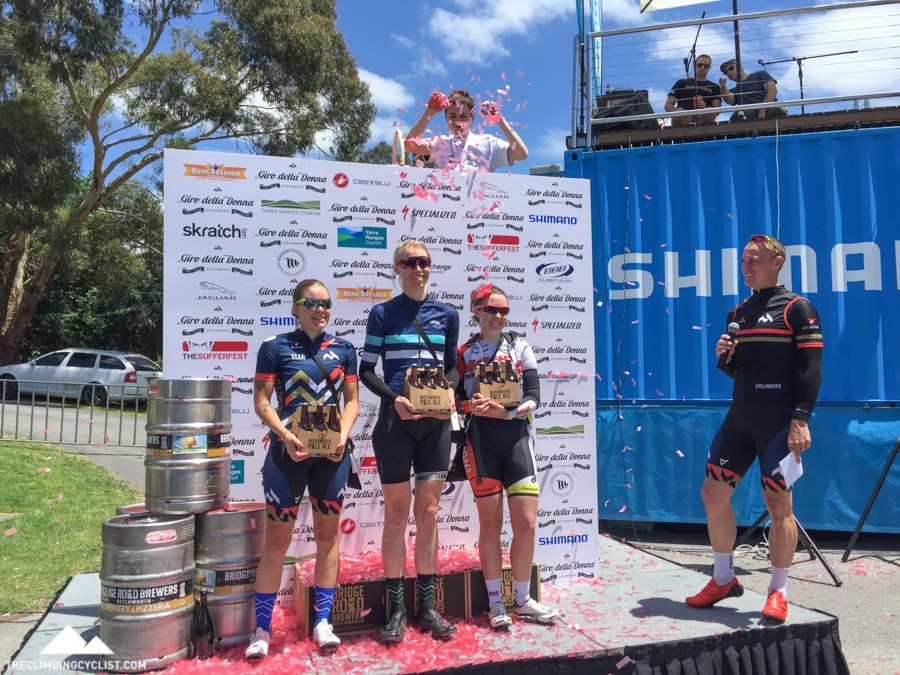