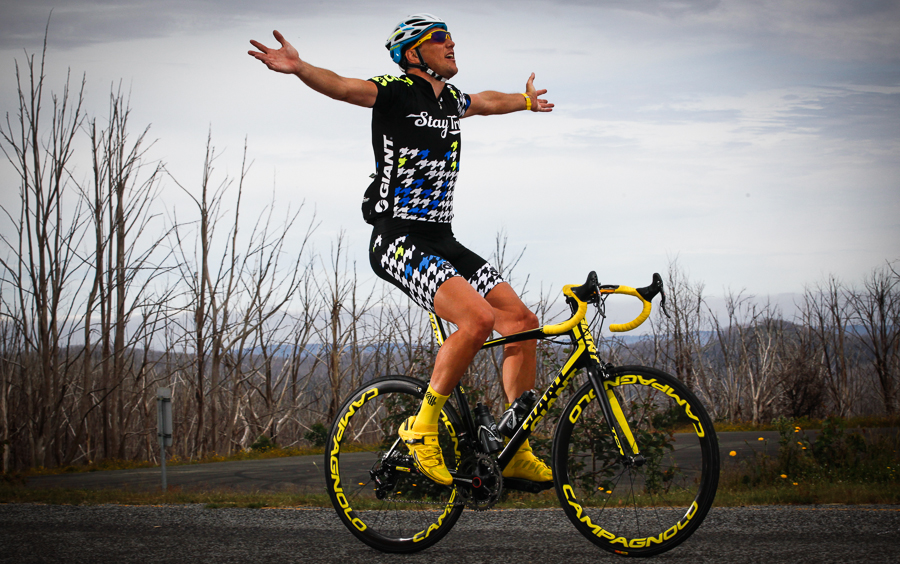 The rides are finished, the entries are in, and now it’s time to draw the winner of the major prize in the 7 Peaks Domestique Series. Before we do that though, here are a couple of stats about the series that might interest you.

Between October last year and February this year we hosted 12 rides as part of the 7 Peaks Domestique Series. In those 12 rides, we had a combined total of 924 climbs completed — an average off 77 people per ride. Considering Andy and I would have been happy with 20 people per ride, it’s a result we’re very happy with.

The smallest ride we had was the afternoon session on our first trip to Mt. Buller, when 14 people rocked up. The small crowd was hardly surprising given how horrendous the weather was –climbing the mountain was like riding upstream and the thunder and lightning only made things more ridiculous.

The biggest crowd we had was on our second trip to Lake Mountain when 161 people turned up. And that wasn’t the only time we had 100+ to a ride; our second trip to Mt. Baw Baw saw a crowd of 116 tackle that great climb. I’m not sure if there’s been a bigger group of cyclists attempting Mt. Baw Baw in one day, aside from the Baw Baw Classic.

But of course, the 7 Peaks Domestique Series wasn’t all about the numbers; it was about getting people on their bikes, riding in the hills, meeting new people and having fun in the process. I think we can safely say we achieved that.

And so, to the prize draw.

For every ride in the 7 Peaks Domestique Series you did with us, you got an entry in the draw. So that’s 924 entries. And we also said that if you completed any of the 7 Peaks during the Audax Alpine Classic, the 3 Peaks Challenge, the Scody High Country Cycle Challenge or on the Easter long weekend — and told us that you did — then you got an entry for those as well. So that left us with a total of 959 entries in the draw.

We went and picked a number at random between 1 and 959 — 227 — and matched that up with the rider’s name in our 7 Peaks Finishers spreadsheet. And so, the winner of the Mavic Cosmic Elite wheelset, courtesy of our friends at Cycling Express, is Tony Egan. Congratulations Tony!

The folks at McLennan Cycles in Daylesford have also given us a very swish merino wool jersey to giveaway. The winner of that prize, #683, is Brian Beardon. Congrats Brian!

We don’t have a prize for the best finish-line pose in the series but if we did, it would definitely go to Lee “Hollywood” Turner. That’s his effort at the top of this post (with image courtesy of Nigel Welch).

A big thank you again to everyone that came along and made the 7 Peaks Domestique Series so memorable. And a huge thank you, once again, to our tremendous support crew that did such a great job of looking after us.

And finally, we’ve put together a list showing the names of everyone that rode at least one climb in the series (including the bonus days), arranged by the number of climbs completed. (I wish someone else had done every climb so it doesn’t look like I’m big-noting myself!)

Until next time, thanks for reading!