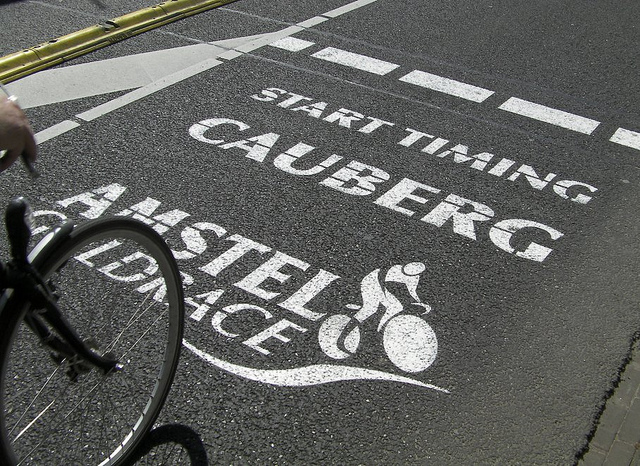 Thanks to SBS, we Australians have been able to see more of cycling’s Spring Classics live on TV this year than ever before. In recent weeks we’ve seen Gerald Ciolek’s surprise win in Milan-San Remo, Cancellara’s stomping victory in Tour of Flanders and the Swiss powerhouse’s  last-ditch effort to win Paris-Roubaix. And tonight, for the first time, SBS will broadcast the Amstel Gold Race live.

Amstel Gold is the first of three Ardennes Classics (the others being Fleche Wallone and Liege-Bastogne-Liege) and this year’s edition covers 252km in the Limburg province of The Netherlands. While The Netherlands is known for being 20%  under sea level, as The Inner Ring points out in this terrific preview, the province of Limburg (in the south-eastern tip of the Netherlands) is actually quite hilly. And that’s why I’m particularly interested in this race.

This year’s edition of the Amstel Gold Race features 34 climbs — one every 7.4km on average — making for a rather impressive course profile. In fact, when you look at the course map (below) you’ll notice that the route designers really have gone in search of as many climbs as possible.

Here are the details for each of the climbs in the race:

You’ll notice that none of climbs are particularly long — the longest, the Camerig, is less than 5km long. But all of these little rises add up and by the end of the 252km course the riders will have climbed roughly 4,000m.

Here’s an interesting fact: climb #12, Drielandenpunt, takes the riders to the top of Vaalserberg (Mt. Vaals) — the highest point of the European part of the Netherlands (Mount Scenery, in the Carribean Netherlands, is higher at roughly 800m above sea level).

The summit of the climb is referred to as Drielandenpunt (or “Three-Country Point”) because it’s on the very south-eastern tip of the Netherlands where the country borders Belgium and Germany. Coming only 110km into the race this climb almost certainly won’t play a decisive part in the outcome of the race; for that, we’ll likely have to wait until the final 50km of the race.

We could see a thinning out of the peloton on climb #26, the Gulpenerberg, which has an average gradient of 9.7% and a maximum of around 13%. Sure, it might only be around 600m long, but with the race starting to heat up  by that point some of the non-climbing-specialists might be in a bit of difficulty.

The Keutenberg (climb #30) comes roughly 30km from the end could also prove quite selective with a maximum gradient of 22%. It’s the steepest road in The Netherlands according to The Inner Ring and could well be a good place for an attack.

But perhaps the most decisive climb of the race will be the 900m long Cauberg, which maxes out at 12% and which riders will tackle four times in total (after 54, 162, 230 and 249km). From 2003 until 2012 the Amstel Gold Race actually finished at the top of the Cauberg, giving pure climbers a real advantage but in 2013 the final section of the race has been changed slightly.

The Cauberg is still the final climb of the day, but the race ends a further 1.8km past the top of the climb. In theory, this should create a greater opportunity for the sprinters to catch back on after the final ascent of the Cauberg and get into position before a final sprint.

Interestingly, the Amstel Gold Race now finishes in the same way as the 2012 world championships where, in the men’s road race, Philippe Gilbert (BMC) stomped away on the Cauberg and held on for those final 1.8km to take the win.

Could Gilbert repeat his form from the Worlds to take out his third Amstel Gold Race in four years? He’s certainly in good form, as his second place at Brabantse Pijl race on Wednesday shows. That race also featured a climb just before the finish line and it was only really Gilbert and Peter Sagan (Cannondale) that were left to contest the sprint after that final climb.

But it’s Sagan that must surely go into Amstel Gold as the favourite. Just check out the final kilometres of Brabantse Pijl to see why (particularly from 1m55s onwards):

If Sagan can be near the front of the peloton at the start of the final time up the Cauberg tonight, he’ll be very hard to beat. In fact, to quote The Inner Ring (did I mention that his piece is great?): “It’s hard to run a scenario without Peter Sagan winning.”

But, of course, a lot can happen in 252km and in race that’s famous for it’s multitude of “road furniture”, one silly mistake could end any rider’s day prematurely.

Regardless, it’s sure to be a cracking race and I’ll certainly be tuning in from 10.30pm (AEST) to watch it live on SBS.

Who do you reckon will win? Can anyone beat Peter Sagan? Could Simon Gerrans improve on the third place he got in the 2011 Amstel Gold Race?