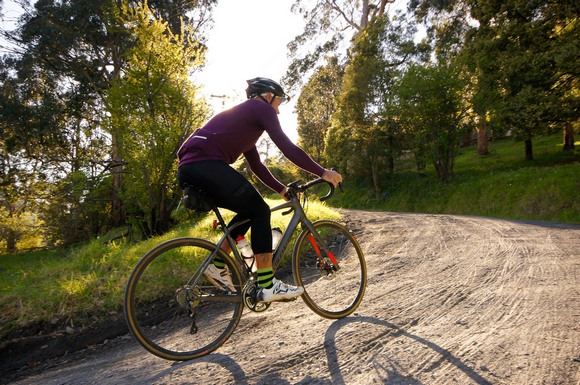 Organising an event like the Melbourne Dirty Dozen is a bit of a strange process. Many, many hours are spent getting the right permissions, filling in paperwork for various organisations, creating rider maps, and completing other tasks that have almost nothing to do with actually riding a bike up hills.

Throughout the planning process, the ride itself almost feels like the easiest part; a mere three-hour exercise in the context of 100+ hours spent bringing the event to life. Of course, come the day of the event itself, the ride feels anything but easy, as I would find out on Sunday.

More importantly, all of the hard work becomes worth it as soon as the first people start telling you how much they’re enjoying themselves.

For the first time in the event’s four-year history, the Melbourne Dirty Dozen was held in the lovely town of Warburton about 90 minutes east of Melbourne. Far from being a last minute decision, the idea of holding a Dirty Dozen ride in Warburton was first mentioned by my Dirty Dozen co-conspirator David Blom back in 2012. It wasn’t until this year, after running three editions of the event in the Dandenongs, that we took the plunge and headed out to Warburton.

In May of this year my brother Brendan and I went out and rode Blommy’s proposed course, checking to see if the route was realistic. It was, as we discovered, but it was also very hard. The addition of some unsealed climbs only increased the level of difficulty. Perfect.

After four months of planning and preparation the event finally rolled around on Sunday morning, bringing with it the most glorious spring weather imaginable. 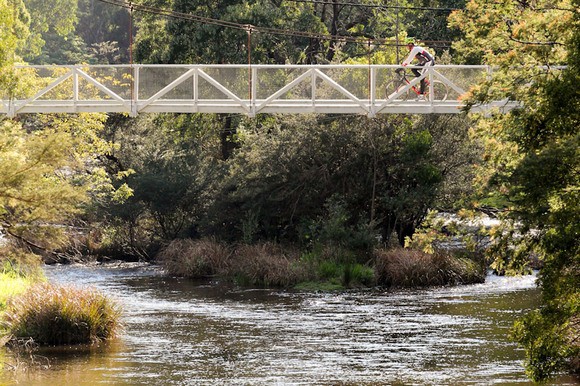 Another change for DD15 — in addition to the new location and addition of unsealed climbs — was the attendance of a small handful of media outlets. In addition to the team from cycling website La Velocita (you can read their write-up from the day here) and James McCormack from Bike magazine (who’d come all the way down from Sydney especially), we also had Matt Keenan and Joe Ward from SBS TV’s The Bike Lane along. With Joe filming, Matt would complete the ride; no mean feat given he’s barely ridden a bike since April.

I joined a small group that gathered around Keeno at the start and together we rolled off to tackle the first of the day’s 13 steep climbs.

Located literally throwing distance from the start, Madeline St/Croom St set the scene nicely. This steep, rutted-out, gravel road made finding traction something of a challenge, but before too long it was over and we were turning around and heading across the Yarra River to begin the next two climbs.

As we began the Brisbane Hill Rd ascent a few moments later, a handful of riders darted past me, chasing each other up climb #3. I was feeling good, but not that good, and I thought to myself “they’re going to pay for that later!”. After all, the day was just getting started.

Back across the river we were onto the easiest climb of the day: the comparatively pedestrian Giffords Rd/Pheasant Pde with its average gradient of ‘just’ 8.8%. The group ticked that one off with ease, but things would only get harder from that point on.

As we ascended climb #5 — Ferntree Ave/Brides Pde — I remarked to someone next to me that this was probably my favourite climb of the day. The challengingly steep unsealed ramps, the almost complete lack of traffic, and the fact the scenery was so impressive. Brilliant.

Going into the ride I’d known that the sixth climb, Leila Rd/Story Rd, would be the one most likely to catch riders by surprise. I’d described the climb as being “among the hardest of the ride” and highlighted that “the gradient ramps up considerably” once you turn right onto Story Rd, but many people remarked later that this climb had been the day’s greatest challenge.

The steep gradient (>20%) and the loose gravel surface made it hard to get any purchase. I’d been convinced that staying in the saddle was the way to go, but when I tried that on Sunday, it all came unstuck.

My front wheel kept lifting off the ground, eventually causing me to lose balance and panic-unclip. With the gradient making it near-impossible to clip back in and continue on, I descended to the start of the steep final ramp and tried again.

This time around I tried it out of the saddle, keeping my weight as far back as I could so as to avoid any wheel slip. My strategy worked and and I was able to grind my way to the top in one go, somehow setting the equal Strava KOM on that short segment in the process.

We descended Story Rd carefully and then made our way up the ‘bonus climb’ of Mt. Little Joe, remembering as we did that the average gradient of 5% says nothing of the climb’s undulating and at-times steep nature.

The descent off the other side was glorious, as too were the flatter roads that led us to Milners Gap: a hill we’d climb from both directions as climbs #7 and #8.

The other riders in the group seemed excited by the brief, flat interlude and took the opportunity to increase the tempo. I quickly found myself out the back, both unwilling to go too deep — knowing how hard the back half of the course was — and unable to comfortably match the pace.

I climbed the first side of Milners Gap on my own and caught the group at the turnaround point on the other side. I decided to get a headstart on the climb while Matt Keenan was finishing off a few rider interviews, figuring the group would catch me by the top of the climb. Sure enough they did, and roughly half a dozen of us made our way to Yarra Junction to top up our fluids and pick up some gels courtesy of Melbourne-based nutrition company Pro4mance. 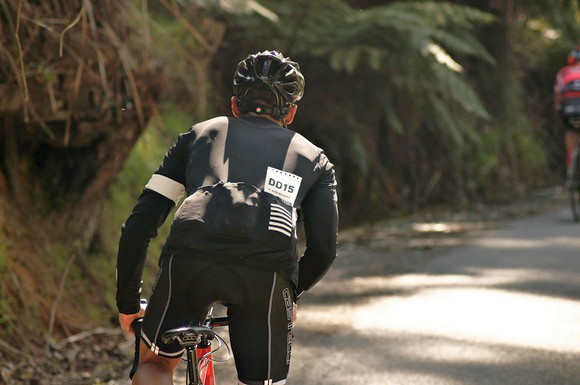 For the following few kilometres we’d follow the Lilydale-Warburton Rail Trail back towards Warburton, ensuring we didn’t have to ride the busy main road. The views from the trail are just stunning, thanks to the surrounding mountains, and the warm sunshine only served to heighten the relaxed feeling that had descended on the group. There was a downside to this cruisey interlude though — having been lulled into a false sense of comfort, the climbs that followed were particularly uncomfortable.

Climb #9 up Bacchus Cres/Damon Ct/Pythias Ct was short but painfully steep and at the top, when asked on camera how many climbs were left, I initially said “three”, the hard effort seemingly having affected my ability to count. At the top of each of the remaining ascents the cry would go up: “only three to go!”.

Climb #10, Dee Rd, might well have been the most scenic of the day, with its beautiful narrow roadway, beautiful native flora and nearby river. But it was also one of the hardest of the day. With fatigued legs, the ever-increasing gradient proved more challenging than it might have. The views at the top were spectacular, offering a convenient excuse for those of us who needed a moment to catch our breath. 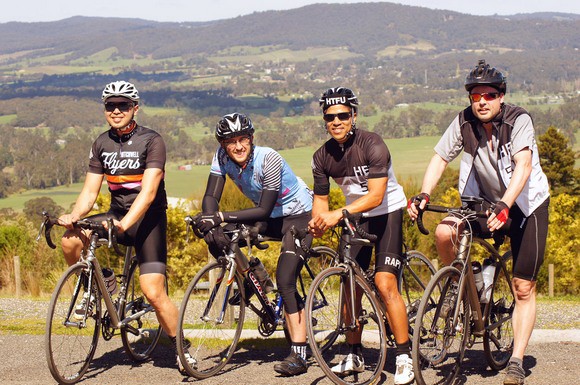 The challenge of McKenzie King Drive, climb #11, is not the gradient (which is still significant), but the teasing nature of the climb. The final 500 metres are dead straight and the summit feels within your grasp from the outset. In reality it’s a long, slow drag to get there.

The penultimate climb, Surrey Rd, had no shortage of steep ramps to keep the legs working hard, but by this point the end was within our grasp. We battled our way up to the O’Shannassy Aqueduct Trail then made our way down the awesomely fast descent before transferring to the epic final climb of the day.

There’s a good reason we saved Martyr Rd for last. Few sections of road quite inspire the same amount of fear as the concrete wall that is Martyr Rd. Tired legs only make the ascent that much more difficult. 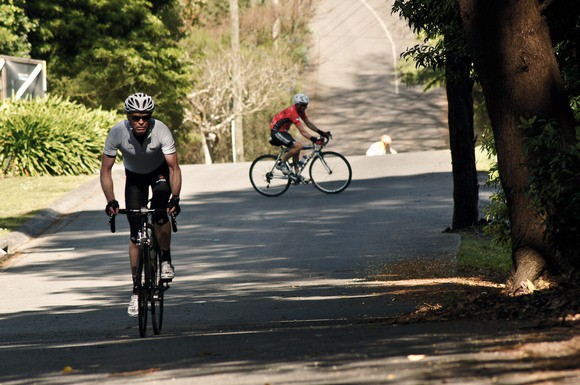 I knew just how hard it was going to be so I didn’t waste any time at the bottom contemplating the challenge in front of me. For the next 300m I was deep inside the pain cave, doing everything I could to keep the bike moving forward. Reaching the top was a tremendous relief — I’d conquered all 13 climbs!

Matt Keenan, meanwhile, was engaged in his own private battle. Despite looking strong for most of the day, his lack of recent riding finally caught up to him on Martyr Rd. A cramping quadriceps muscle almost scuppered his chances of getting to the top, and when he did he soon collapsed to the ground, cameraman Joe wasting no time to get a close-up of Matt in pain.

As enjoyable as the ride had been — and I had a blast — it will be the part that came next that I’ll probably remember most fondly. It’s such a tremendous feeling to get back to the start/finish area and to be able to see hundreds of people gathered around, having lunch, chatting through their favourite (and not-so-favourite) moments from the day.

The thing that makes the Dirty Dozen work, in my opinion, is its difficulty. The challenge of getting through all the climbs is significant, particularly if you don’t do much climbing, and the feeling of satisfaction when you do so is tremendous. To then be able to share the story of your day with others who have had a similar experience? Magic.

For me, the Melbourne Dirty Dozen is about giving something back to cycling and to the cycling community; a community that’s given me plenty over the years. Of course, I also get an immense amount of satisfaction out of putting on events like these, even if they do involve a lot of work.

As ever, I need to say a big thank you to the terrific volunteers who made the day possible: my partner Sharon, my dad Ron, and Sharon’s family: Craig, Deb, Murray and Betty. Thank you all: you guys are simply amazing. Thanks to Blommy for designing the course, thanks to Doug and the team at Cog Bike Cafe for being so welcoming, and thanks to my brother Brendan for joining me on the recon ride back in May.

And, of course, a huge thank you to everyone that came along and helped create another cycling experience I won’t easily forget.

Be sure to be watching The Bike Lane on Sunday October 4 at 5pm (AEST) on SBS One where you’ll be able to get Matt Keenan’s take on the day. Hopefully they’ve been kind to me in the edit — I blame post-climbing delirium on any poor answers I gave to Keeno’s interview questions!

And if you like the photos you see in this post, be sure to check out the terrific gallery that Jess Varey and Emily Figgis put together from the day. High-resolution version of all photos are available to purchase at their website. You can also find more photos from the day in this Facebook gallery from Martin Kelly or by searching for #DD15 on Instagram (just ignore the photos from Duran Duran’s 2015 tour).

As ever, thanks for reading!