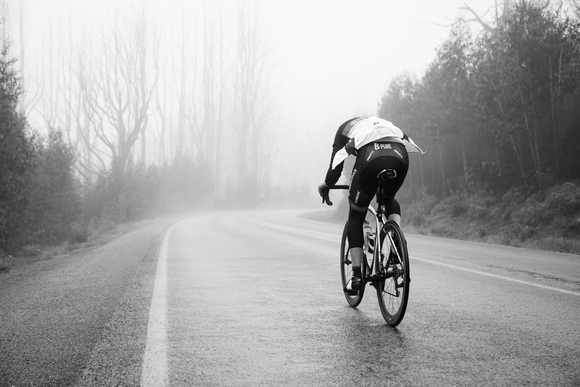 What an incredible turn-out. If you’d asked me a few weeks ago how many riders I would have been happy with on Sunday, I would have said 20 or 30. To see 97 riders finish on Sunday was not only inspirational, but very exciting and rather humbling as well.

But when 200 riders turned up to Marysville this Sunday just gone, I’ll admit I was hoping for a few more. It’s not that we were being greedy; just that we’d had 650 riders register for the day, which would have made Sunday our biggest ride ever by nearly 50%.

But there was a good reason for the lower-than-predicted turn-out.

Perfect weather for a climb up Lake Mountain. #domestique #7peakschallenge

A week or so out from the ride the forecasts started saying “a chance of showers” and in the coming days it only got worse. “A chance of showers” became “a very high chance of rain” with potential thunderstorms thrown in for good measure. And when roughly 50mm of rain fell the night before the ride, it looked like we might be in for a repeat of our first Domestique 7 Peaks Series expedition to Mt. Buller in December 2012. That was the wettest I’ve ever been on the bike. It was one of those days where you’re so wet that the rain actually doesn’t matter any more.

Thankfully(?) the worst of the weather had passed by the time Sunday morning rolled around, but the damage had been done. Most riders that registered opted to stay in bed … and I really can’t blame them.

Andy, myself and our wonderful volunteers rocked up to Gallipoli Park in Marysville at about 7.30am and got busy setting up our start village. It wasn’t easy — the undercover BBQ area we were using was occupied by perhaps a dozen locals who’d set up camp, half-empty tins of spirits sitting abandoned next to their swags.

They didn’t seem particularly happy to be woken so early after what looked to have been a reasonably big night (one bloke gave Andy an impressive, profanity-laden spray). But we weren’t really able to let them have a long lie-in. We needed to get ready and plus, we had a council permit. Still, it was funny stepping cautiously over occupied swags as we got everything set up.

There was a late rush just before 9am as riders braved the drizzle for the first time and headed to the BBQ area for a pre-ride briefing. The previous night’s tenants had vacated by this point — thankfully — leaving room for everyone undercover. With the formalities out of the way it was time to send people off in waves. The Domestique 7 Peaks Series was underway for another year!

In the days before the ride I’d be harbouring thoughts of climbing Lake Mountain as hard as I could, to try and beat the PB I set last year. But I’d forgotten how hard those opening few kilometres are, particularly when your warm-up is about 500m long. It took only a few minutes to decide that a return visit to Lake Mountain might be a better option. At least then I’d have some time to get into shape, plus I’d have the time to tackle the climb with a decent warm-up.

In two-and-a-bit years of doing these rides Andy and I have worked out a simple way of getting the most enjoyment out of each climb. We start towards the back of the field (if not at the very back) then work out way through, climbing at a reasonable tempo as we jump from group to group. In this way we get the chance to speak to a whole bunch of people, while still managing to get a reasonable hit-out for ourselves.

We opted for the same approach on Sunday, saying g’day to those we passed and offering encouragement to those who looked like they could use it. We spotted plenty of familiar faces — friends we’ve made through 7 Peaks and other projects — and it was good to catch up. And of course there were a multitude of new faces as well. It’s always encouraging to see new riders coming along to a Domestique event for the first time.

Something Andy and I are really proud of when it comes to the Domestique 7 Peaks Series is the spread of riders that we see coming along. On Sunday we had everyone from recent national team representatives Kendelle Hodges and Tess Fabry, down to people who were riding the mountain for the first time. Everybody has their own story to tell, and many of those stories are truly inspirational.

Like Nic Latham’s effort. I don’t know all the details but I believe Nic only started handcycling in the past year and was once a Commonwealth Games swimmer. To get through those steep opening kilometres of the Lake Mountain climb on a handcycle is an amazing effort; to be able to get all the way to the summit then descend in those conditions shows amazing resolve and tenacity. Chapeau Nic!

As tends to happen when you’re chatting away while climbing (thanks Hammo!) the kilometres ticked away and it wasn’t long until we were reaching the final stretches of the ascent. We’d enjoyed reasonably favourable conditions most of the way — particularly given the downpour the night before — but things got a little more ragged in the final few kilometres.

Visibility dropped considerably as we entered a thick cloud layer, the wind picked up a little and the light drizzle got a little heavier. But, sooner than expected, we rolled into the Lake Mountain Alpine Resort carpark and the climb was done. 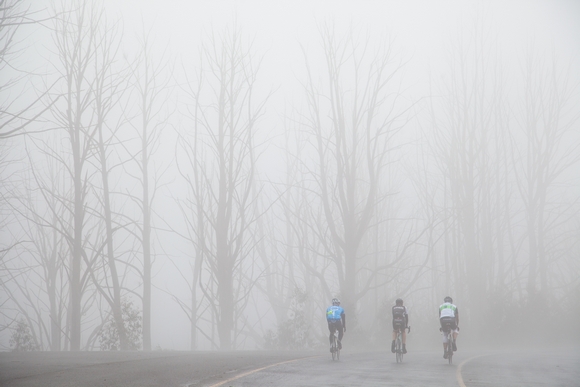 In previous years riders have tended to stay at the summit for a little while, chatting to one another about the mountain they’d just conquered. But on Sunday people seemed to be keen to head back down the mountain as soon as they could. And I’m not surprised — it was 2°C at the summit and as soon as you cooled down from your climbing effort it got pretty chilly up there.

I caught up with a few people in the cafe at the summit (and enjoyed a delicious hot dog) before starting my own descent. The thick fog made it hard to see more than 50m ahead as I rolled out of the carpark. And with the temperature still hovering just above freezing and the rain falling, it wasn’t shaping up as a particularly enjoyable descent.

But after a few kilometres I emerged from the cloud, the rain became light enough that I wasn’t even concerned about it, and I really started to enjoy myself. It’s been several months since I descended a proper mountain so it was thrilling to experience the excitement of bombing the straights and picking good lines once again.

I thought the cold might have been a problem but after those first few kilometres I didn’t really notice it. I’m not sure if descending Mt. Donna Buang in the snow has toughened me up a little or if I was just well rugged up. Either way, it was a susprisingly enjoyable descent, even in the steep final kilometres into Marysville which I was slightly worried about given the conditions. Best of all it would seem that everyone got back down to Marysville safely and incident-free. 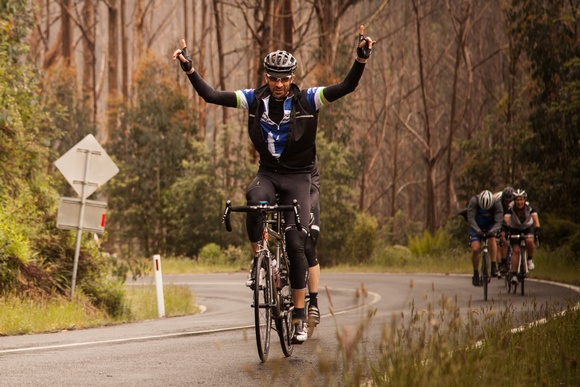 While it’s Andy and I that do the bulk of the work behind the scenes to bring the Domestique 7 Peaks Series together, the rides themselves couldn’t happen without the support of some amazing individuals. To Sharon and Tam, Tony, Dr Ryan, Naomi, Josh and a handful of others who pitched in on the day: thanks so much for the making the ride possible. To our fantastic sponsors — Winners, Sukkie, CycleCover and Tourism North East — thanks for your fantastic, ongoing support.

Speaking of support, if you like what we’re doing with the series and want to help us out, head to the Domestique Cycling website, click on “Shop” and buy a little something. It all helps! 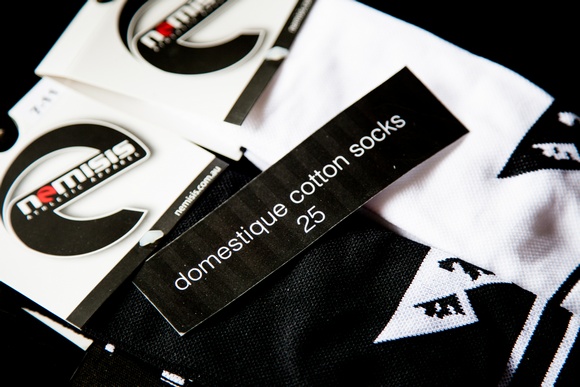 From here it’s a very quick turn-around before the next 7 Peaks ride. We’re out at Mt. Buller on Saturday November 29 (a week and a half away!) with a ride that starts at 2pm. Thanks to the Mt. Buller Alpine Resort we’ll have a full closure for the entire climb again, which is very exciting. You can sign up to the ride for free here and you can stay up to date at the Facebook event page.

If you’re coming up for the ride, why not stay for the weekend as well? There are some terrific bike-friendly accommodation options here and there’ll be a dinner after the ride on Saturday which you can join us for. It’s at the Arlberg Hotel and to get a spot for dinner (places are limited!) you’ll need to call and make a booking. Just be sure to let them know you’re with the Domestique cycling group.

And then, if you feel like a bit of mountain biking on the Sunday, Shannon from Gravity Oz has spots available on a guided ride on the Delatite River trail. Bike hire, lunch, shuttle bus tickets and three-hours’ riding is all included for $120 per person. Call Shannon on 5775 2724 or 0409 552 564 for more info and/or to book.

Before we get to Mt. Buller though, take a minute to flick through some of the photos that the lovely Kirsten Simpson took at Lake Mountain on Sunday. Kirsten’s made a whole host of low-res photos available for you to download, for free. Just head to her website and use the password “Lake Mountain”. You’ve also got the option of buying a photo or two to help support Kirsten’s great work.

Until next time, thanks very much for reading and I hope to see you out at Mt. Buller on the 29th!