It’s easy to forget that the Donvale Demon only took up cycling in the second half of last year. Since then he’s completed the Around the Bay in a Day (210km version) and thrown everything at his preparations for the 3 Peaks Challenge. In this guest post the Demon describes his first 3 Peaks attempt.

Plenty of riders zipped by me on the way down Falls Creek, which added to my general mood of glumness. It was an emotional day for me, for reasons unconnected to the ride, and reasons I won’t trouble you with here.

In addition to those, quite morose concerns, I was keen not to come skidding off the bike and faceplant the road – as is my wont at times – on the way down that seemingly endless first descent.

My relative sluggishness, and everyone else’s relative speed, didn’t bother me at first. But then I looked over my shoulder, back up the hill, and had the awful feeling I was the last person in the event. I half-expected to see the Lantern Rouge slinking past, no-handies, eating a toastie and unscrewing the lid of his coffee flask. And then I saw some more riders, who would pass me before too long. 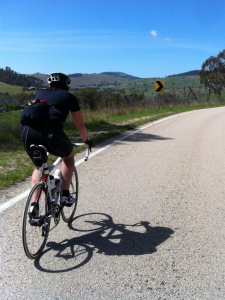 On the flats, in Mt. Beauty, I started passing some riders, clawing my way back into the event. And then, on the first climb, Tawonga Gap, a new experience for me: I started actually passing people on a climb – and not just a few but loads, many of whom had passed me with ease during the descent.

In the early morning air I found the going remarkably easy – the only other time I’d done the climb, in January, I was riding through melting tarmac in 41-degrees heat.

I didn’t stop at the summit, but started rolling down the other side, picking up speed and, for the first time in the day, really going for it. By the lower half of the descent I was engaged in what felt like speed dating with several other riders. I’d latch on to someone’s back wheel, like a dog sniffing ass, then get frustrated and pass them; or they’d latch on to mine and  – for reasons I can’t fully explain – I’d burst away and leave them for dead.

But true love prevailed. I tig-tagged for a bit with a stranger on a Giant before committing. We settled into a rhythm and hauled ass toward Harrietville.

To my great surprise, given I’d last seen them on the second bend after the start line, I came up alongside the Climbing Cyclist and Brendan “the descender” de Neef, in a ragtag shoal of riders somewhere outside Smoko.

From there we rode together until the rest stop in Harrietville, where we dismounted. It was nice chatting to them next to children’s playpark amid dozens of lavishly pissing men at 8.30am on a Sunday morning. But I couldn’t help sparing a thought for the little kids coming down to play in the park later. Why the tang of ammonia in their favourite bush? Why those frothy puddles in the tan bark?

I tackled Hotham alone, which proved to be as difficult as I’d anticipated. I thought I was hunger-flatting at various points, and that my kneecaps were about to pop off at others. Someone asked me at the start of the last 10 kays, when the gradient banks up aggresively after a 10km false flat, whether we were on CRB Hill – a much harder section a few horrid kays away – and I kind of laughed, kind of grunted.

At Dinner Plains I rammed down a veggie wrap and cookie while catching up with the Climbing Cyclist and Brendan. The ride from this point to Omeo was largely pleasant and occasionally surreal. Riding alongside the Climbing Cyclist (Brendan, the descender, had lived up to his name and was long gone) there were long stretches in which we barely saw anyone else. A few cows here, a couple of sheep there. It felt like any other training ride, on any other week, as opposed to the 3 Peaks.

And then, when we came to climbs of any length, we’d see people again, bunched up, panting, saying prayers and ranting.

At the Omeo rest stop I felt pretty good, apart from a nagging anxiety about the soon-to-be-in-front-of-me Back of Falls climb which, when I last tried it, nearly ended me.

As it was, the last climb was kind of hilarious. I waved goodbye to Brendan, the Climbing Cyclist, Andy and Evan (of Hells 500 fame) at WTF Corner, not even engaging in the folly that we’d be climbing together, and settled into a 7km/h climbing pace. 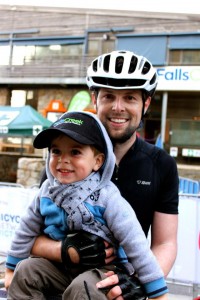 That was the average, you’ll understand – sometimes it was more like 3km/h. It took me about five minutes to overtake someone who was walking just ahead of me with their bike – I reckon we were neck and neck for about two of those minutes.

Dismounted riders were sitting on the safety barriers at the side of the road, their heads down with fatigue and/or embarrassment. Two guys on their bikes in front of me kept cutting from side to side in a zigzag.

In that fug of near-exhaustion it was hard to work out whether this would actually cut out the angle, or whether they were just making life more difficult for themselves. And more difficult for me. Every time they cut in front of my front wheel I felt like swiping at them, shooing them off. Of course, I was way too knackered to do so.

At the last rest stop, Trapyard Gap, I munched into some dry-as-dust fruitcake – just what the dehydration called for (thanks Bicycle Network Victoria!) and got to pedaling again.

Even if I walked from Trapyard Gap, I knew I would finish the event within the cut-off time. That led me, momentarily, to reflect on the negative comments received on my previous posts about training for this event; comments that roughly boiled down to: give up on 3 Peaks now, you loser; you’re tripping, bro; and the gothically depressing: ‘Beware of your pride …   the kids will no doubt want their dad in one piece.’

I wiled away a grim few minutes imagining Bicycle Network Victoria reps soberly delivering my head, shoulder blades and a Shimano-clad foot in a box to one son; a leg, elbow and hands to the other.

Such thoughts vanished as I crested the top of the climb and saw the Rocky Valley Dam beneath me; suddenly there was a freshness in my legs, a kick from somewhere new. I got down in the drops and powered ahead, knowing I could take on any rider in the world, apart from the 20 or 30 who obviously felt the same and sped by me with ease in those glorious last few kays.

Crossing the line felt good, of course, as did seeing my family there. I hugged my parents, my in-laws, my wife, my sons, and even thought about hugging some strangers. Shortly afterwards I was hugging my finisher’s jersey and a beer, then hugging some fries and pizza.

Turns out I crossed the line with a ride time of 10 hours 24 minutes 43 seconds, which was better than I’d been expecting.

In the many hard days of training I’d often motivated myself by thinking I’d never have to cycle up mountains again after 3 Peaks. Now, a week or so after the event, I can’t wait to start climbing again …

Update: I’m taking part in the Ride to Conquer Cancer event in Melbourne later this year. A good cause, of course, if you’d like to donate.

12 Replies to “Guest post: 3 Peaks Challenge (I am the mountain)”