Few climbs in world cycling capture the imagination like Alpe d’Huez. If you’re serious about your cycling then this famous climb is probably already on your bucket list, but if it isn’t, it should be. In this guest post, Angus Boase takes us back to the day a few weeks ago that he took on the great mountain.

I guess today was one that every cyclist dreams of — I climbed cycling’s most iconic mountain, Alpe d’Huez. The climb is 13.2km long with an average gradient of 8.1%. The climb starts at an altitude of 744m and rises to 1,815m — a total ascent of 1,071m.

We had an hour and a half bus trip to the starting point of the ride, 7km from the base of the climb, just outside the town of Le Bourg-d’Oisans. A constant stream of cyclists rode past as we got ready, all happy to yell at us or give us a wave. It sure added to the butterflies building in my stomach.

Finally we headed off, 35 keen cyclists ready to tackle this famous mountain. The ride began on a nice flat road. I had to remind myself that the French choose to drive on the wrong side of the road — ‘look left at the roundabouts!’. Unfortunately the pump on my hire bike fell off so, after stopping, I had to catch up with the group. 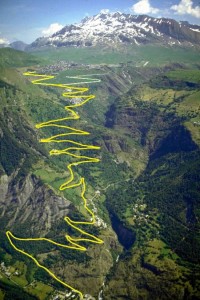 It seemed as if luck had deserted me — after stopping to pick up the pump I got a piece of roadwork tape in my cluster, forcing me to stop again. After this I let the group go — I didn’t want to use all my energy before I started climbing!

I don’t remember much about the village of Le Bourg-d’Oisans, just the tour guide waving at me to turn left. It wasn’t quite a wall I saw in front of me as I rounded the corner, but it was close.

The first 2km of the climb are above 10% gradient and my heart-rate shot up to 178BPM in no time at all. Visions of past Tours de France flashed through my head. Just how many attacks had I seen on this piece of road? The famous stone wall was on my right, names were painted all over the road. I had goosebumps as I climbed.

Knowing things eased up was a bit of comfort, as was the scenery. I often wanted to stop and look around, but decided to do this on the way down. Every kilometre is marked with a sign showing the average gradient for the next kilometre. Each of the climb’s 21 hairpins is also named after a Tour de France stage winner and numbered from 21 at the bottom to 1 at the top. I decided not to look at the numbers — I’d rather it was a surprise.

Once I was through the steep opening kilometres, the gradient eased back to a comfortable 7–8% (I can’t believe I called that comfortable). I found relief on each of the hairpins where the gradient seemed to ease a little. Looking up and seeing the road twist and climb above you is truly amazing. I guess you could say I was in awe. This was it — I was really climbing Alpe d’Huez.

Its not until you’ve climbed three quarters of the way up that can you see the village of Huez perched at the top. When you do finally see the village, it just seems so high and far away. And then you look down to Le Bourg-d’Oisans, surprised at just how high you are and how much further you have to go. 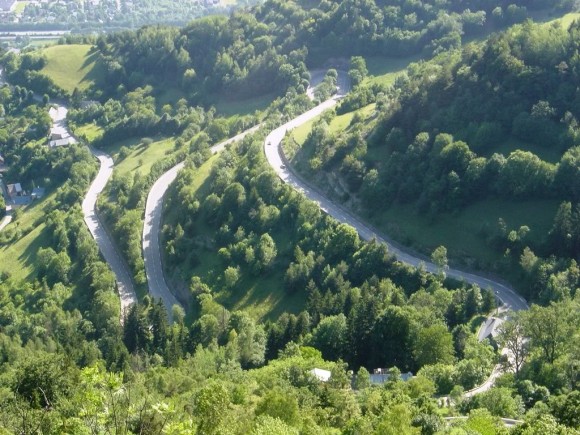 My hire bike was equipped with compact cranks and a 27-tooth gear on the rear cassette. The 27 was all I rode. It’s a constant grind all the way with virtually no let up at all. The mountains I have climbed in Australia have all had some sections that gave you respite, but not this one. We might have had a little breather through the village of La Garde, but only briefly. It was just a matter of finding your own pace and keeping on riding.

The road was busy with other cyclists making the pilgrimage to the top, as well as plenty of cars and motorbikes. The traffic was great and the French motorists seemed more likely to toot and cheer than they were to complain.

As the hairpins disappeared the village of Huez became visible. Riders on their way down yelled encouragement. The last three hairpins are tough with the gradient at over 10% once again. Making the final wide turn into the Huez is just superb. It seemed like everyone there was cheering just for me. 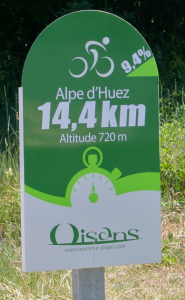 The road through Huez is full of cyclists, pedestrians, cafes pubs and even bike shops*. I knew the end of the climb was in a car park so I kept climbing, through the village to what I thought was the end. But the road kept going up, smaller and rougher than it was below. But it went up, and so did I — I wasn’t going to stop until the road starting going down. After all, it might be a long time until I get to climb this beast again, so I wanted to make sure I reached the very top.

After three more kilometres at a much easier gradient I reached the top. My Garmin was showing an altitude of 1,998m so I walked up the side of the road just to tick over 2,000m.

After taking some photos and soaking up the breathtaking view, it was back down to the pub for a well-earned beer with the rest of the group. It might have been a little cheesy, but I went into a nearby bike shop to buy an Alpe d’Huez finishers jersey. Hey, why not?

The descent was great with no pedalling required. If I let the brakes go I was off like a rocket. This is where the pro riders really earn their money – it must be great to be able to descend like they do. But with so much traffic on the road, great care was needed and of course the views were very distracting. We stopped numerous times for photos or just to look. We then detoured through La Garde just to look around. One of the group blew a front tyre at 55km/h and was very lucky just to stay upright.

Our group met again later in a small café for lunch. There were big smiles on display everywhere and everyone had their own story to tell of their ride up the great mountain. One thing we all had in common was a great sense of satisfaction.

* One of the guys in our group (Jason) had the misfortune of having both his seat-stays broken on the plane. He ended up buying a new bike from the Trek concept store at Huez. After we had all finished the ride and had lunch, Jason and one of the tour guides drove back to up to Huez to pick up the bike. To Jason’s great surprise, Andy Schleck was in the shop. He signed the bike and Jason’s jersey and spent a bit of time chatting as well.