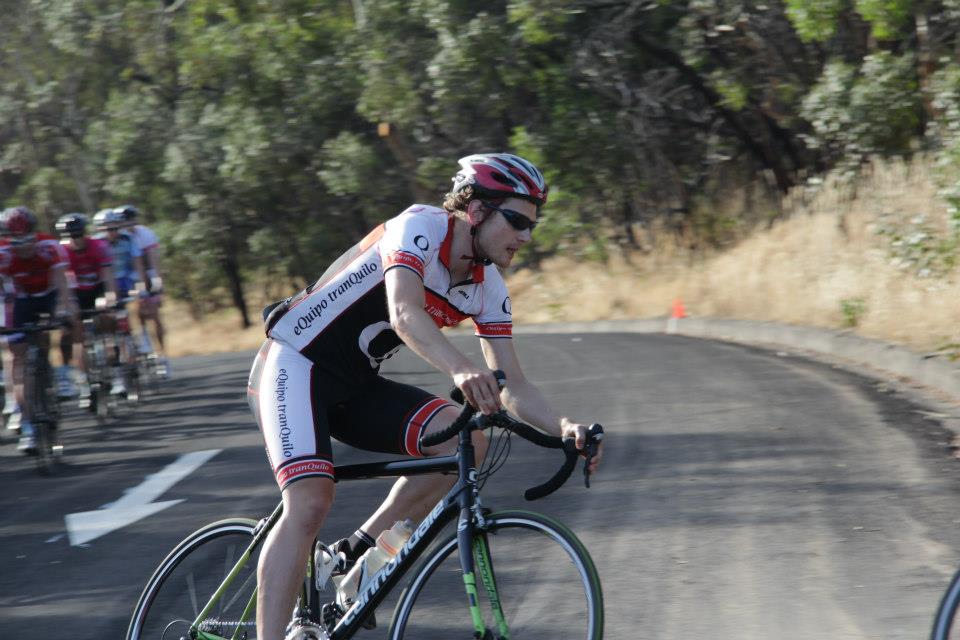 It was ten months after my first bike race that I finally decided to pin a number on again. But the gap between races 2 and 3 was considerably shorter than that: just one week.

After last week’s visit to the Hawthorn Cycling Club crits I was keen to head back and see if I could improve on my 9th place. In that first race I’d been pretty aggressive in covering moves and I found myself out of position coming into the business end of the race. But this time around I was determined not to waste too much energy. I would stay near the front of the group until the final sprint and attack there. But it didn’t work out that way.

As I arrived at the course and got ready to register, I noticed that Hells 500/TCC group ride regular, Brendan Canty, had also come along. We both knew he was too strong for D-grade — hell, he owns the Strava KOM on Lake Mountain for Pete’s sake — but the officials made him race D because it was his first race.

From that point on, the rest of us were going to be racing for second. And there were quite a few of us. Last week’s crit attracted maybe 20 in D grade but this week’s field seemed to be 30+ strong. As we rolled into the first neutral lap, there was a fair bit of jostling for position and it felt far more disorganised than last week. In the early laps of the race, Brendan sat at the back with the marshalls keeping a close eye on him to make sure he was capable of racing safely and fairly. I wouldn’t see him for a while.

My eQuipo tranQuilo teammate Matt ‘Fletch’ Fletcher did a lot of work to animate the race early on, leaping off the front and maintaining a promising gap on his own for a few laps. But with a very strong headwind blowing on the back straight, it wasn’t long before Fletch ran out of puff and was absorbed by the main field.

And while there were a couple of other short-lived attacks, nobody seemed particularly interested in a decisive move, probably because of the wind. I thought briefly about leaping off the front but thought better of it and sat back in the bunch. There were still quite a few laps to go in the race and besides, my legs still felt heavy after the Dirty Dozen on Sunday.

I spent most of the race sitting near the front — second or third wheel — and I can see why they say that’s the best place to be. You’re out of the wind, you’re away from the jostling for position in the main field and you can see the attacks when they go. Not only that, but you aren’t boxed in if you decide to follow an attack.

With about 5 laps to go in the race, I saw Brendan Canty coming up the outside as I pushed hard up the climb to the start/finish line. I thought to myself ‘this is the move’ but didn’t respond straight away. One other guy went with Brendan and they stayed a little way off the front. It looked like they might stay away.

So, over the next lap, I pushed hard, jumping between the main bunch and a few stragglers that were in no-man’s-land on the way to Brendan’s group. Eventually, I caught on to Brendan’s wheel … just as we hit the climb.

I stayed with Brendan out front for a little while, half expecting the bunch to catch us, but on the following lap, as we climbed the hill again, I realised we had a sizeable gap. Brendan looked like he was waiting for me — he’s a much stronger rider than me — so I told him to push on. He did, and I tried to follow, but it was an exercise in futility. Instead, for the final two laps I was the one in no-man’s-land, trying desperately to keep Brendan in view but, more importantly, trying to hold on to second place.

As the bell rang for the final lap, I had a decent gap on the riders behind. I knew I just needed to hold on for another 90 seconds and I would get my first podium finish in a crit. The only problem was, I was already at my limit when the lap started, and I still had the headwind to push into and the tough climb to sprint up.

I reckon I got overtaken just before the final corner and I started sprinting in 4th place. I pushed deeper and deeper into the pain cave, my heart ready to explode out of my chest. ‘Only 50m to go! Hold on!’, I told myself. If I picked up 4th it would be a great result — an improvement on last time and I’d make back my entry fee and then some.

I pushed and pushed up the climb toward the finish, just hoping I’d done enough to hold off the bunch that was surely swarming behind me. But just when I allowed myself to think I had 4th place locked in, a rider came sailing up the right-hand side and pipped me a few metres before the line. Bugger it.

In hindsight I’m really happy with 5th place. But at the time I was disappointed I couldn’t hold on just a little bit longer. Then again, I went so deep in those final few laps that I spent 20 minutes after the race just trying not to throw up. So I don’t know if there was anything else I could have done. Apologies to Matt Whiting who said hi to me straight after the race and got little more than a grunt in reply! I wasn’t trying to be rude, I promise, I was just trying to keep my lunch down.

And as for Brendan, well, he won the race comfortably — as he should have. He’s a very humble guy but even he would admit that he was far too strong for D-grade. But, rules are rules and, on balance, I suppose it makes sense to have had him in D grade for his first outing. I dare say we won’t be seeing him in D-grade again though.

Looking at my Strava file from the race I can see that this week’s race was slightly faster than last week’s and that I suffered more this time around. That seems about right. I certainly went deeper into the hurt locker than I did last week, but then, there’s a lot I can learn from that. I now know that I can go a little bit deeper than I initially thought.

And that’s what it’s all about: learning. I’m never going to be strong enough to race A-grade but, for me, this foray into racing’s been about understanding and appreciating another aspect of the sport. It doesn’t hurt that it’s a whole bunch of fun as well.

Thanks to Dave Williams and the Hawthorn Cycling Club for the images you see above (except the one of Brendan). To see all the images in this set click here.