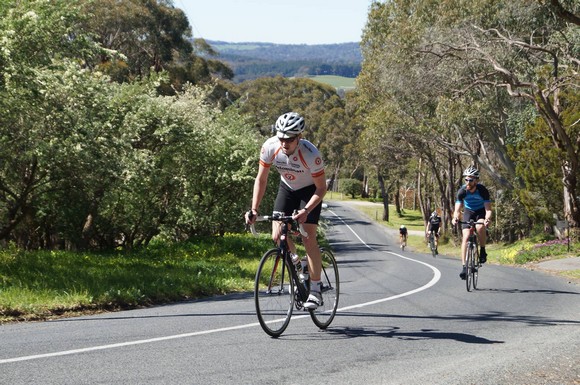 The third edition of the Melbourne Dirty Dozen might be happening this Sunday, but our friends over in Adelaide already had their 2014 edition of the event a couple weeks ago. Adam Williss is the man behind the Adelaide Dirty Dozen and he wrote this report about how the day unfolded.

Beep. Garmin off. Ride finished. More than 3,500m vertical in just under 115km. Collapse. That pretty much sums up the 2014 Adelaide Dirty Dozen held on Saturday September 6. But that would be too easy … so I’ll elaborate.

Keeping the promotion of this year’s Adelaide Dirty Dozen almost solely to Facebook seemed to open the event up even further and it quickly became evident that, pending the weather, the event would be bigger again [ed. the first edition had 75 riders and last year had roughly 150]. This also brought some logistical and ‘risk management’ problems that I would need to wade through. However, a very competitive insurance arrangement, wide-ranging support for a “chip-in” of $5 per rider to cover this, and a number of prize donations from the community meant that most of my fears were allayed. Thanks everyone.

The morning dawned just like the previous Dirty Dozen events with not a cloud in the sky, dry roads, air that was a little bit brisk, but a forecast for the low 20s. It would turn out to be a cracking day to be on a bike. Red Berry Espresso opened early and soon hundreds of cyclists were piling in for a coffee and to sign on to the event.

After a quick rider briefing, everyone set off at a leisurely and safe pace through the backstreets and on to the first climb of Mt Osmond (via Thirkell & Hayward Terrace) where the field spread out beautifully over the 2.3km, 10% climb.

The second hill, Gill Terrace, is a tough little punch that sits underneath Mt Osmond and averages 15% over its 600m. It includes the infamous “Gill-o-Tine” — an optional dead-end extension at the end of the hill that gets up towards 30% at its steepest, and can cause carnage if you get it wrong! So what happened on the day? A burst water main right at that point had a mini-waterfall flowing over the road making it very slippery, and we saw a handful of very slow clipstacks! Nothing but pride damaged (fortunately). Maybe 10% of riders took on the optional challenge.

The next three hills are probably the ‘bread and butter’ steep hill challenges in Adelaide: Kensington Road, Coach Road and Coachhouse Road/Woodlands Way. The main Kensington Road climb averages 12% over its 1.3km, but it is a hill that just gets steeper and steeper as you climb, touching just under 20% towards the top.

Coach Road starts off with just under 2km of around 10%, heads into a false flat for a few hundred metres, then kicks up with 200m of about 20% before a little dipper at the top (but still averages 10.5% over its 2.4km). Coachhouse Road/Woodlands Way (2.7km at 10.6%) is considered the toughest climb in Adelaide with its series of ‘steps’ that get steeper in succession; the final one nudging 20%. Even with a very popular refreshment pit stop at the top of Coach Road, these three hills sorted out the contenders from the pretenders!

The pretty route from the top of Norton Summit across to Crafers skimmed up and across Mt Lofty and was punctuated by a new climb for this year – the descent then climb out of the Cleland National Park. At 11% over 900m it is not an overly difficult climb as such, but certainly added to the fatigue levels of the ever-thinning numbers of participants.

Known locally as “The Wall”, Whitewood Road in the pretty little enclave of Upper Sturt certainly was that with the bulk of its 111m gain over 1.1km being done over about 700m. Another new climb for the Dirty Dozen, it also heralded the start of a succession of new climbs for many of the participants as the route veered south.

Next up was Heather Road which starts with a pretty brutal 14% first 300m and 12% average for the first 600m. But once that was dealt with there was a fairly enjoyable long run down to the Adelaide Hills town of Mylor where drinks were replenished and some enjoyed the local café.

On from Mylor and Ridge Road presented itself with its series of steep kickers that saw plenty of riders forced to dismount and limp upwards on their cleats. The average of 9.5% over its 1.3km does nothing to suggest how hard this climb really is. The climb includes quite a slice of downhill and one of the kickers hits about 20%. A refreshment station at the top of the climb was well met by everyone!

Morgan Road is another challenge not far away and its 1.4km at 9% hides the 400m ramp averaging 14% buried within it. It’s tough on any day, but with nine challenging hills behind us, it was every bit the grind to the top.

Pole Road is a hidden little road that takes you into, then out of, the Sturt River valley and is one of the more beautiful, yet ‘hidden’ hills in Adelaide. Averaging pretty much spot on 10% the whole way up the kilometre of climbing, this was perfectly placed to set a cadence and hold it, yet at the same time ‘recover’ for the final two steep climbs to come.

A little commute followed, mostly downhill, to the start of the Lynton Bike Path – a commuter path built by the local council to take commuters off the main roads heading up into the hills suburbs in peak hour. A commuter bike path for the Dirty Dozen I hear you ask? Yep! A commuter path that is so steep at its climbing start point that it nudges 30%, averages 23% for the first 300m and just under 12% for 700m. And you are correct – the average commuter doesn’t (can’t) use it. So it’s a fairly new, well-maintained stretch of bitumen with no traffic — perfect for the Dirty Dozen! The refreshments at the top of this climb were awesome and provided just enough sugar to take on the final climb.

Sheoak Road, personally one of my favourite stretches of road around Adelaide, has a bit of everything: amazing views towards Adelaide, rolling lumps, steep pitches, koalas, kangaroos, emus, echidnas, magpies … and minimal traffic. And it was the “dirty” climb of this years Dirty Dozen.

The full road measures something in the order of 7km at 3% with the first 2.5-3km being pretty much flat or downhill. However, just when you start wondering when the climbing will begin you come face to face with 500m of 15% including 100m of 22% embedded within it. After the climbing we’d done so far … ouch!

A series of rolling hills follows, edging you ever upwards, and after one final (quite steep) downhill you get the final kilometre of the road again rising at over 9%. A perfect challenge to complete the 2014 Adelaide Dirty Dozen, and a perfect way to finish off the riders!

How did I go? I rode with a group of mates of varying abilities and fitness levels. Some doubted they would make it, but did, and some were strong climbers who I knew would finish strong. Collectively however, we were smashed. One of my colleagues actually confirmed that he had lost 4kg of body mass over the course of the day. I actually went in with a slight niggle in my left knee sustained ‘training’ a week earlier. By the end of the ride it was a full blown strain and caused me a great deal of pain, but there was no way I wouldn’t be completing my own ride!

There were some fantastic volunteers from within the cycling community who helped me out on the roads and all the participants are extremely thankful to them. There were also a number from within the cycling community who stumped up a few lucky prizes for those who completed the ride. The icing on the cake was a donation of a return trip for two flying economy with Malaysia Airlines to Kuala Lumpur with two nights stay at the 5 star Seri-Pacific Hotel. I’m sure such an incentive got more than a few riders through to the end!

Having said that, the volunteers counted six blocks of 50 riders (plus some) heading off at the start, and I know that there were riders who didn’t worry about officially signing up for the day. So, unofficially, probably around 300 riders taking part. Something for me to think about moving forwards …

I think everyone enjoyed what was a bloody solid day in the saddle!

Thanks very much to Adam Williss for taking the time to write this report and congratulations to him on putting together another stellar event. If you’d like to read Adam’s reports from the first two editions of the ride, you can find his 2012 report here and his 2013 report here.

Thanks to Andrew Watts for the photos you see in this post. You can see more of Andrew’s photos at the Adelaide Dirty Dozen Facebook page. Click here for a Strava file showing the ride in its entirety.