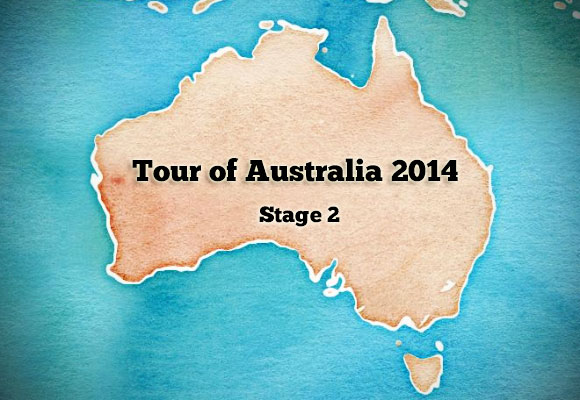 Inspired by the Giro d’Italia, the Tour de France and the Vuelta a Espana, the Tour of Australia is a fictional three-week Grand Tour route created by David Blom and Matt de Neef to showcase some of Australia’s best cycling roads. This is the second year of the race and today we reveal stage 2 of the 2014 edition.

After the excitement of the Friday evening team time trial the night before, the first road stage of the 2014 Tour of Australia gets underway late on Saturday morning.

Departing from just outside the Currumbin Sanctuary, just south of the Gold Coast, the riders head out on to the Gold Coast Highway and start making their way south east. After passing through the main street of Coolangatta the race crosses the border into New South Wales before snaking its way south then west.

There’s a gentle 4km rise which peaks in the town of Terranora after 19km. The climb isn’t steep enough to be a categorised climb; it’s more of a chance for the riders to warm-up their legs. After crossing the Tweed River with 25km covered the riders head east back towards the coast, turning south at Cudgen and following the Tweed Coast Road to Wooyung Road at the 60km mark.

There are a few short and largely insignificant climbs as Wooyung Road winds its way south east beside the Pacific Motorway. The day’s first and only intermediate sprint comes in Brunswick Heads after 76km before the race once again heads for the hinterland.

The day’s first two climbs come back-to-back, separated by a short descent, and each are about 3km long at 6%. At 266m above sea level the peak of this second climb is the highest point of the course, from which the riders head south over a series of short climbs and descents.

At Tintenbar the riders head east on Ross Lane, back towards the coast, before taking The Coast Road north. From here it’s just 17km to the popular seaside town of Byron Bay where the riders head for Lighthouse Road and a final fourth category climb (2.1km at 4%) to the finish at Cape Byron, the easternmost point of mainland Australia.

Given the final climb of the day isn’t particularly long or steep this is probably a stage for puncheurs like Philippe Gilbert, or perhaps for riders like Michael Matthews or Peter Sagan who can climb and sprint.

You would expect a break to get up the road early in the stage, soaking up the intermediate sprint and points in the Cat 3 climb. But you would also expect the teams of the riders mentioned above to work hard to bring back the escape.

Then again, the course is pretty lumpy until about 20km to go, which could potentially suit the breakaway. Either way, the GC contenders will be keen to stay safe in the bunch and save themselves for later in the race.