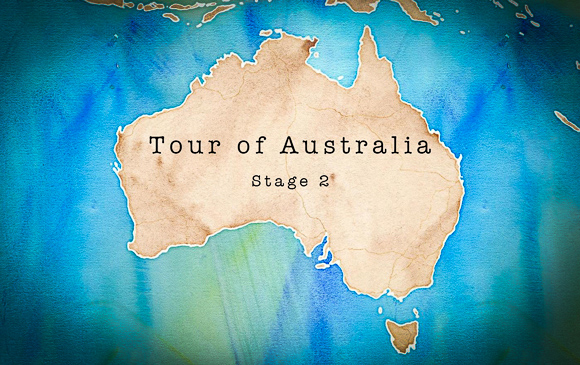 We’ve put together a course for a three-week race that takes in some of the best roads in the country in an attempt to create cycling’s fourth Grand Tour: the Tour of Australia. We’re revealing one stage per day in the lead-up to the Tour de France . This is stage 2.

Click here to see the route on RideWithGPS, including the location of the sprint points.

On stage 2 of the Tour of Australia, the riders head inland from the small seaside town of Kingston SE and east towards Naracoorte and the Victorian border. From there they follow the Wimmera Highway through the small town of Edenhope, before heading north east past Mt. Arapiles and on to the stage finish in the regional centre of Horsham.

At 254km in length, stage 2 is the longest stage of the Tour of Australia and, in contrast to the previous day’s stage, it’s almost entirely flat (despite the slightly misleading profile below).

There are two intermediate sprints points along the way, one in Narracoorte after 100km of racing, and one in Edenhope after 153km. There are no KOM points on offer on stage 2 given there’s only 400m of climbing for the whole day and no climbs of any real significance.

This is a day for the GC contenders and the climbers to just sit in and let the sprinters’ teams duke it out. A breakaway might get more than 10 minutes on the peloton on this stage and not really be considered a threat before being reeled back in ahead of an almost-certain bunch sprint.

Followers of the Tour with an interest in the Big Things of Australia will be pleased to know that the starting town of Kingston SE is home to the Big Lobster, affectionately known as Larry. Standing some 17 metres tall Larry is apparently one of the most impressive of Australia’s many Big Things and he is located just down the road from where the stage starts.

Other points of interest along the race route include the Narracoorte Caves, South Australia’s only World Heritage Listed site thanks to an impressive fossil record, and Mt. Arapiles, home to one of the hardest rock climbing routes in the world: Punks in the Gym.

Stay posted for stage 3 of the Tour of Australia, coming tomorrow.

6 Replies to “Tour of Australia: stage 2”