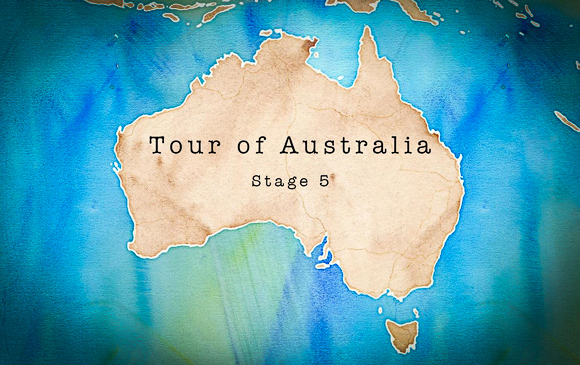 We’ve put together a course for a three-week race that takes in some of the best roads in the country in an attempt to create cycling’s fourth Grand Tour: the Tour of Australia. We’re currently revealing one stage per day in the lead-up to the Tour de France. This is stage 5. Enjoy!

The Great Ocean Road is one of Australia’s most popular tourist drives, and with good reason — the scenery is some of the country’s finest with the winding road hugging the coastline for several hundred kilometres along Australia’s south coast. With that in mind, what better place for a stage of the Tour of Australia?

Starting in the small town of Peterborough stage 5 takes the riders east through towns like Port Campbell, Apollo Bay, Lorne and Anglesea all the way to the finish of the 200km stage in the town of Torquay. There are many famous and popular tourist destinations and places worth visiting along the race route, and many that the broadcast helicopter will be able to capture for viewers back home.

Such sites include the limestone formations of The 12 Apostles, the Bay of Islands and Loch Ard Gorge near Port Campbell. Then there’s the Cape Otway Lightstation (“Australia’s most significant lighthouse”), the lush rainforest of the Otway Ranges and the amazing beaches all the way along the coast, including world-renowned surf beach Bells Beach.

The scenery might be stunning but that doesn’t mean the riding will be easy, with notorious winds and many climbs peppering the route. There are three sets of KOM points on offer on stage 5: at the top of the long but gentle 2nd category Lavers Hill climb (18.5km at 2.3%), at the top of the similarly gentle 3rd category Hordern Vale climb (10.9km at 2.6%) and the top of the 3km 4th category climb out of Anglesea (at 3.7%).

While these climbs aren’t particularly challenging they are likely to thwart the pure sprinters so the intermediate sprint points available in Lorne at the 153km mark are likely to go the way of a breakaway rider.

If the sprinters did somehow manage to make it over the three categorised climbs in touch with the main group, they’d need to have plenty in the legs for the painful uphill drag to the finish line in Torquay.

Stay posted for stage 6 of the Tour of Australia, coming tomorrow.

5 Replies to “Tour of Australia: stage 5”