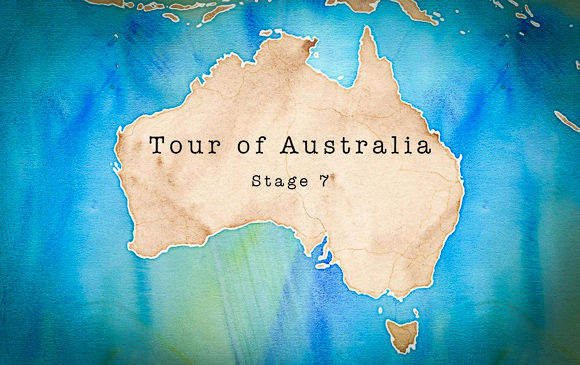 With the Tour de France just around the corner, it got David Blom and I thinking: what would an Australian Grand Tour look like?

We’ve put together a course for a three-week race that takes in some of the best roads in the country in an attempt to create cycling’s fourth Grand Tour: the Tour of Australia. We’ll be revealing one stage per day in the lead-up to the Tour de France. This is stage 7.

Click here to see the full route on Ride With GPS, including the KOM and intermediate sprint points.

At only 155km in length, stage 7 is one of the shortest stages of the Tour of Australia. But what the stage lacks in length, it more than makes up for in challenging and selective climbs.

Starting in Yarra Glen (where the previous stage finished) stage 7 takes the riders out to a Healesville along a rolling stretch of road with a handful of short rises along the way. Once in Healesville the riders take a left turn and head up the 8.4km, 2nd category climb of Myers Creek Road. A breakaway might be expected to make a move here.

From the top of the climb in Toolangi it’s down the stunning Chum Creek Road back to Healesville. At this point the riders pass through the first intermediate sprint point of the day before heading for one of the most picturesque sections of road in the state: the Black Spur.

Normally too dangerous for cyclists after, say, 8am, riders in the Tour of Australia will be able to tackle the truly stunning Black Spur with the safety of a closed road. The beauty of this stretch of road won’t make it any easier for the riders though with a couple of short climbs to contend with, including a 3rd category climb that’s roughly 6km long at 5%.

From the top of the Black Spur at Narbethong the riders head for Marysville via a short but very steep 4th category climb. And once they get to Marysville it’s up the first half of the Lake Mountain climb (a 1st category climb) which starts off with 4.5km at close to 10% and ends, after 10km, with the fourth KOM point of the day.

After 10km of climbing from Marysville, and after 89km of racing, the riders descend briefly before heading up the Mt. Arnold Saddle — another 2km climb — before reaching the Cumberland Junction and the top of the Reefton Spur. From this point it’s 20km of almost all downhill before 20km of flat road into Warburton. At Warburton, with a touch less than 140km in the legs, the riders hit the second and final intermediate sprint point of the day before turning right to begin the final climb of the day: Mt. Donna Buang.

With a little less than 17km to the top, at an average gradient of 6.4%, this climb will almost certainly shatter the field (if it hasn’t been already) with only the very best climbers and the GC contenders likely to contest the final on the second hors categorie climb of the Tour.

This is a stage for the hardmen; a stage where the sprinters and the non-climbers will band together just to get over the climbs inside the time limit, to live to fight another day. It’s a stage that would suit a breakaway. With five sets of KOM points on offer, you might expect contenders for the KOM classification to break away in search of valuable points.

For viewers at home, this stage would be among the most picturesque yet, with many fern-lined roads throughout. And for visitors to the area there’s no shortage of tourist destinations to fit in around watching the race. These include Chateau Yering, Domaine Chandon, the Yarra Valley and many local wineries. Further into the stage there’s the Healesville Sanctuary, the Maroondah Dam, Steavensons Falls near Marysville, the Rainforest Gallery on the slopes of Mt. Donna Buang, and much more.

Stay posted for stage 8 of the Tour of Australia, coming tomorrow.