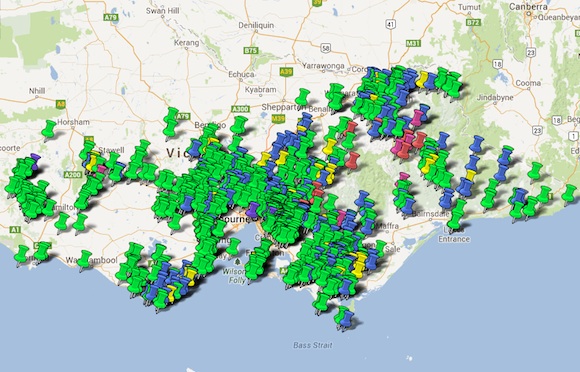 Over the past year or so David Blom, of Dirty Dozen and Tour of Australia fame, has been collecting information about the many hundreds of cycling climbs in Victoria. Now, David has put together an impressive map that features more than 800 of those climbs and written the following post about the process.

It all started with a suggestion or two of climbs to add to this site. Over time the number of suggested climbs began to build, then about a year ago I decided, as I found them, I would add them to a spreadsheet and catalogue them as I went. For each climb I added a weblink, information about where the climb is, a category and as much detail as I could find.

As part of my job, I spend a fair bit of time looking at maps of the land and this gave me the inspiration to find what’s out there. Just how many climbs are there in Victoria? How many lookouts and places of interest could I find? Where would be good to ride? It makes my work very enjoyable to have that sort of thought.

So the list grew out of that idea and pretty soon it became a monster, especially once I realised just how many climbs there are out there and how hard it could be to determine if a road is sealed or not. The task of doing this was a labour of love — there was no chasing of financial reward, just a sense of adding something to the cycling community, something that could be of great value. Something that would add to one of the best websites out there — The Climbing Cyclist [ed. Your check is in the mail, Blommy.]

The list, and the map that it turned into, show all of the sealed Victorian climbs I was able to find that have a elevation gain of more than 80m (and would therefore attract Strava classification). Please note that the list is a best effort based upon maps, hearsay, satellite photos, street views, Cycle2Max and Strava details. There may well be climbs here that are not entirely accurate, owing to dodgy GPS figures, a sealed road ending suddenly, a lack of detail of maps, or there may be climbs missing all together.

There are many climbs that are a series of two or more ramps, generally I have linked all of them together into one listing. I have also tried to go for single road examples, rather the two or more roads being linked up to form one huge elaborate climb – unless I felt doing so was logical.

I also tried to go from a low point to a high point of a climb, thus many of the Strava segments listed won’t cover the full climb. I have just done my best to guess in the circumstances presented. I am sure that there will be more climbs to add in the future as roads get built or sealed. For example, with the expansion of the suburb of Sunbury, many climbs will be popping up there in the next few years.

Whilst Strava is great for finding segments, it wasn’t the perfect tool. There are quite often multiple segments for the one climb, it will often miss several climbs (primarily only displaying the popular climbs) and it won’t display where people have not ridden before. Strava also doesn’t give detailed descriptions, identify where the bitumen ends and the gravel begins or have wonderful photos highlighting what you will see.

I am hoping to expand this list into other states and onto dirt roads as well. I think there should be a categorisation for unsealed roads based on the cobblestone ratings used in Paris-Roubaix — one star for fine gravel (take your 23mm tyres on with confidence,) through to five stars (even 4WDs should avoid this stretch of road).

In the meantime, get out there and explore some of these climbs, and please help with the improvement of this list. I wish you safe riding and great climbing.

Click here to see the latest version of the map and some instructions on how to use it.

9 Replies to “Finding all the sealed climbs in Victoria”