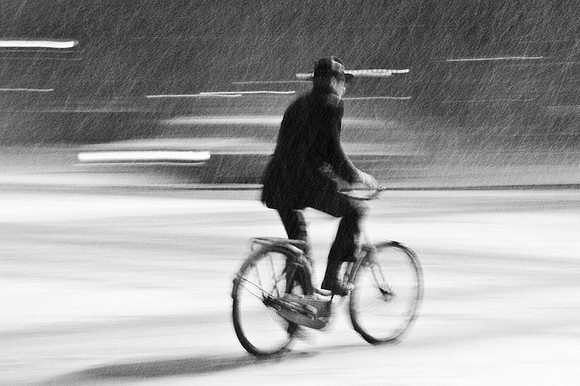 With the Melbourne winter just about behind us — finally — it got me wondering how many meaningful rides I’d done since the start of June. I’m not talking about commutes to and from work; I’m talking about decently lengthy and/or challenging rides where I got home feeling like I’d achieved something.

A quick look at Strava and I had my answer: five. Well, four, because one of those was in Austria in the middle of the European summer.

Even though there are good reasons for this lack of riding — the fact I’m training for the Melbourne Marathon and the fact I was in Europe without a bike for more than four weeks — I found myself feeling despondent after realising how little riding I’ve been doing.

But the feeling didn’t last for long. The more I thought about it, the more I realised that taking a decent amount of time off the bike might have been a good thing. With that in mind, here are four reasons to consider leaving the bike in the garage for a while when next winter rolls around.

Getting ready for a ride when it’s cold and wet outside is a frustratingly laborious process. On one work commute last week I counted no fewer than 18 individual pieces of clothing I needed to put on before heading out: undershirt, jersey, gilet, arm warmers x2, rain jacket, leg warmers x2, knicks, gloves x2, socks x2, shoes x2, shoe covers x2 and helmet. That’s a whole lot of hassle for a one-hour ride. And it doesn’t get any better once you’re out there.

Out on the road you’re still cold despite the amount of gear you’re wearing, your ‘waterproof’ clothing proves to be anything but, you’re more likely to get punctures and to top it off, other road users have seemingly forgotten how to drive just because there’s a bit of water around.

And then when you get to the other end of your ride you’ve got wet clothing to deal with. Is there anything worse than getting ready to ride home and pulling on still-wet knicks, socks and undershirt? And don’t forget the bike — you just know it’s going to take you as long to clean your bike as you actually spent on it.

Ok, I’m hamming it up a little — most of the time the cold and wet are manageable while riding. And strangely, if the conditions are right, both can actually be quite enjoyable.

I’ll never forget the Domestique 7 Peaks Series ride we put on at Mt. Buller a few years ago when the heavens opened and rivers were running down the mountain. In just a few minutes we went from dry to so-soaked-it-doesn’t-matter-any-more and the ridiculousness of the situation actually made it fun. It helped that it was a warmish day and the rain was reasonably refreshing.

And then there are the snow rides. Almost every winter in the past few years I’ve ridden up Mt. Donna Buang in the snow and it’s been glorious. Painfully freezing, but glorious.

But those rare examples aside — and leaving Rule #9 out of it entirely — riding in the rain is usually worth avoiding if you can. Contrast this with running in the rain which, far from being a downer, can actually be nice and refreshing. Plus there’s no equipment to clean up afterwards …

2. Having an ‘off-season’ is important for body and mind

No professional cyclist in the world rides at the same intensity all year round, so why should you? Sure, you’re probably not racing at the elite level every week but the principle is the same: maintaining the same level of fitness and the same motivation year on year without a break is extremely difficult, if not impossible.

‘Detraining’, while a frustrating concept at first, gives your body a chance to recover before you start to push it again.

If you’ve been riding for a few years you probably saw your fitness and performance improve considerably in the early days and then plateau or stagnate somewhat after a certain period of time. If that’s you right now, why not take some time off the bike, give your body and mind a rest, then crack back into it?

Sure, you’ll have to train back up to where you were (and then beyond), but you won’t lose as much as you think. All that riding you’ve done over the years contributes to your fitness base. Getting from that base to where you want to be gets easier each time around. The pros have their off-season at the end of the year, why not take yours in winter when the weather’s awful (see point #1 above)?

3. It’s the perfect opportunity to take up a new challenge

With your bike taking a well-earned rest in the colder months, why not set yourself a new challenge? Running a sub-four-hour marathon has been a goal that’s been on my mind since I completed my first marathon a few years back and this year seemed like a great opportunity to go for it. The Melbourne Marathon is on October 18, meaning I’ve been able to train through the winter and then, once the weather’s warming up, I’ll have more time to focus on riding again.

My good mate Nick balances things particularly well. He spends roughly half the year running (he’s training up for a sub-three-hour marathon) and half the year riding. When it’s running season he barely rides, and when it’s riding season, he barely runs. And it seems to work well for him — he’s a terrific runner and cyclist and comes to both feeling fresh and motivated.

Your new challenge needn’t be running of course — maybe you’ve always wanted to get into swimming, or indoor rock climbing, or some other physical pursuit. Or maybe it’s not a fitness goal at all; maybe you just want to spend more time with your family on weekends.

As much as I’d rather not ride in cold and wet conditions (I know, I know — rule #5, right?), I’ve definitely found myself missing cycling this winter. I miss being strong enough on the bike to have a realistic shot at setting a new PB on a climb, I miss being able to keep up when riding with mates, and I miss being able to just head out to the Dandenongs for four hours of climbing and not worry that it will affect my ability to run 25km on Saturday.

But all of this frustration is a good thing — it means that I’m really looking forward to getting back into cycling. In the past, when I’ve cycled right through winter, I certainly haven’t felt as motivated or inspired to ride as I do right now.

I can’t wait to head out to Hells 500’s Ol’ Dirty this weekend, even though I’ll be slow as hell and I’m not sure how I’ll fit my long run in this weekend. I’m definitely looking forward to the Dirty Dozen on September 20, even though I know how much I’m going to struggle. And most of all, I’m really excited to get out there on the bike when the weather fines up and just enjoy being on the bike.

Those long, lazy rides through the hills in great spring weather. Those rides where you don’t plan to go for a new PB on your favourite climb but you just kind of accidentally do anyway. Those rides with mates where 100km+ passes by easily, all your troubles being erased by the simple joy of riding a bike with mates in great weather.

We’re already starting to catch the first glimpses of spring here in Melbourne and it’s a truly glorious thing. I was lucky enough to get out for a brief spin with my CyclingTips colleagues Andy and Jonathan last week and notwithstanding the ride itself (which was great), the fact that none of us had arm or leg warmers on was a most-welcome sign of things to come.

So, what’s your approach when it comes to cycling in winter? Do you take some time off the bike? Or do you soldier on? I’d love to hear your thoughts in the comments below.

As always, thanks for reading. If you haven’t already, be sure to check out DD15: the 2015 Melbourne Dirty Dozen. It’s a whole new course in a new area this year and we’re more than looking forward to it on Sunday September 20. You can learn more and buy tickets here.

Until next time, please ride safe!