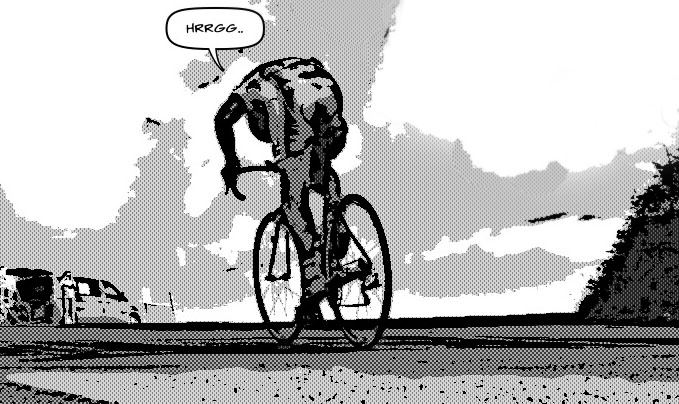 At 6 o’clock tomorrow morning, I’ll start riding in my first Hells 500 invitational epic. In previous years the rides have bordered on the near-impossible — 300km in a day with 5,000m of climbing, 500km over two days with 10,000m of climbing … yep, crazy town. This year’s event is in the same league and come tomorrow night, I suspect I’ll be feeling pretty sore and tired. Hell, I know I will.

While I can’t reveal the exact route until tomorrow morning — Andy’s keen to keep it a secret until we take the start line — I can tell you that I’m sitting here feeling extremely nervous. I’ve ridden the length of tomorrow’s ride in a day before (six times actually) but I’ve never done as much climbing in a day as I will tomorrow. Not only that, but I think the psychological scars from the 3 Peaks Challenge last month are still a little too fresh.

That was some serious suffering — physical and mental — and I don’t think it’s far enough in the past yet for me to chalk it up as “a great day” yet. I can still remember what it felt like crawling back up to Falls Creek after 200km, my body totally drained of energy, my mind sapped of any motivation. The idea of going through that again tomorrow is, well, unappealing to say the least.

And yet, I’m really looking forward to it. I’m not sure if that’s because the ride will be so hard (and therefore very satisfying to finish), or if I’m just looking forward to earning that coveted grey Hells 500 kit that only people that have done one of these invitation-only events can buy.

Either way, there is something fundamentally strange about the idea of knowing, in advance, that you’re about to create physical and psychological trauma for yourself. Knowing that in about 24 hours time, I’ll be so desperate for it to be over that the whole ride (and possibly cycling in general) will seem like a stupid idea.

As Andy so eloquently put it yesterday:

The surprise and pain after hitting your thumb with a hammer is one thing, but to know you are going to hit your thumb in advance – repeatedly – is how we liken the mental preparation for an epic.

It’s Friday, the sun is shining, the legs feel sharp – and yet on Sunday we know will be deep, deep in the hurtbox. Anticipation is an incredible and terrifying thing.This is The Big One for the year, the crescendo, the pinnacle.

While I’m feeling very nervous, I guess I’m probably ready. I’ve been able to maintain my 3 Peaks fitness, I’ve tapered, I’ve carbo loaded and all that’s left now is to get out there tomorrow and do it. Sounds easy, and yet I know that at some point things will start to get very difficult, and then they’ll keep getting more difficult until it’s all over.

8 Replies to “In pursuit of pain: preparing for a Hells 500 epic”