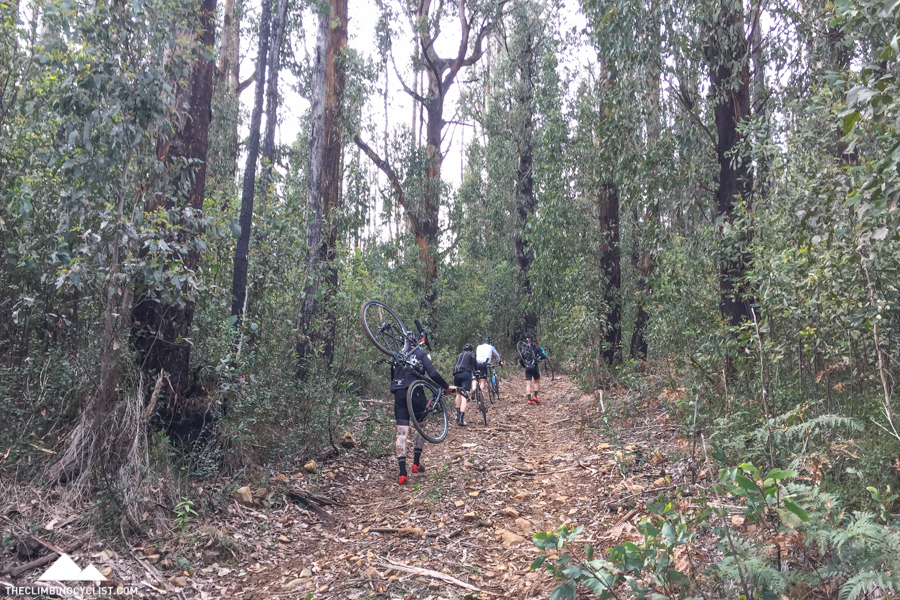 Update: A video from this ride is now online. Click here or scroll down to see it below.

I know Hells 500 founder Andy van Bergen well enough to be able to translate his optimism bias. To know that when he says a ride is doable on a road bike that a cyclocross bike is a better option. And that when he recommends a CX bike, a mountain bike is probably the way to go.

And so it was that, early on Sunday morning, I found myself standing in a hotel carpark in Marysville, one of only a few to have brought an MTB to the 2016 edition of Ol’ Dirty.

Most had CX bikes. A brave (crazy?) few were on regular road bikes. I didn’t have much of a choice — with no CX bike in my arsenal it was either the roadie or the MTB. And for the reasons outlined above, it was always going to be the MTB.

But that’s not to say I wasn’t a little bit nervous. My rear derailleur was still bent from The Redback race in Alice Springs a week earlier, leaving only half my cassette in a usable state.

Despite all this, it didn’t take long at all to be very grateful I was on fat tyres for the fifth edition of Hells 500’s flagship event.

After a brief spin down the main road from Marysville towards Buxton (and by spin I mean >120RPM as I couldn’t get into my smallest cogs) we were turning onto Eagles Next Road and tackling the first of several considerable challenges for the day.

The road tilted skyward at a gradient on the wrong side of 10% and within several hundred metres many riders had already dismounted and were pushing their bikes forlornly up the hill. We’d covered less than 10km.

After a few kilometres of rudely steep climbing, the field bunched up as we took a sharp left-hand turn … onto a steep, narrow goat track covered in tree branches and rocks. The majority of riders seemed to walk but with the extra traction provided by the MTB, I was able to scoot up the outside and carry on unimpeded. The bike choice was already paying dividends.

After a too-brief descent the ‘road’ tilted up once more, and did so in a big way. Around me riders dismounted, unable to get traction on the steep, slick 4WD track. I was able to push on for a time, but after one too many ramps at 20%+ with little traction on offer, I too was walking. And we hadn’t even got to the hard part yet.

In each of the past few editions of Ol’ Dirty, Andy has concocted a route that features a high road and a low road. The high road, as you might expect, constitutes the greater challenge, often featuring some near-unrideable track that only the most foolhardy would attempt.

Remember how I said I know how to interpret Andy’s optimism bias? Perhaps I don’t. Even though I heard Andy mention in his pre-ride briefing that this year’s high road was “a 20 minute walk”, and even though I heard him recommend we “turn around when it gets ridiculous”, I still found myself there on the high road a few hours later, staring up at some unfathomably steep and rocky 4WD track, all without a thought of turning back.

It had started easily enough — a few steep sections, but nothing I couldn’t conquer on the MTB. But then the gradient pushed well beyond 20% and the rocks were as big as my fist. It was simply unrideable, even for former pro Will Walker who was riding an eMTB (read Will’s story here).

Strava tells me I spent at least half an hour pushing my bike up that poor excuse for a road, climbing to more than 1,100m of altitude in the process. Part of me thinks I should have turned around, and taken the low road (which was still more than challenging from what I’ve heard). But then I would have missed the utter carnage that the high road inflicted — the largely silent procession of crestfallen cyclists hauling their bikes up the mountain.

But the further we climbed, the less likely I was to turn around. We’d come so far; it didn’t make sense not to see it through. As some bloke near me said at one point: “Even though I know I should just turn around, I don’t want to.” An equally astute gentleman summed things up perfectly when we finally reached the top: “That was f*cking brutal – there’s no denying it!”

He was right. And the mountain bike, while giving me good gearing and increased traction, was much heavier to lug up the hill than a road or CX bike would have been.

It was a great relief when the road did finally flatten out. And then when the descent from the course’s highest point began, walking the MTB up the mountain was all worth the effort. Having fatter tyres allowed me to descend the branch- and rock-strewn gravel roads at speeds I simply wouldn’t have attempted on a road or CX bike.

The highlight of the ride came part-way down that descent when a left turn took me onto a scenic shortcut that linked up with the course further down the hill. For about 45 minutes I found myself completely and utterly alone, with only the sound of nearby birds and waterfalls for company.

The shortcut started off flat and then descended dramatically off the mountain, getting progressively rougher and rockier as it went. Yet again I was grateful for the wider tyres of the MTB and, for the first time that day, for the dual suspension.

A nearby creek spilled its bank onto the track at one point, following the gravel surface down the mountain. I felt for the riders on thinner tyres that had descended before me.

The road finally flattened out as I rejoined the course and began what would be the final significant challenge of the day.

A sign on the lower slopes of the climb designated the ascent as “Abandon Hope Hill” (see image below). I thought to myself “This doesn’t seem so bad”, but revised my analysis a short time later after a series of demoralising ramps, all of them on gravel at well over 10%.

The climb dragged on and on. On paper it was only a touch over 4km but it felt considerably longer than that, not least because most of it was in a long straight line. But finally, with my lower back screaming at me and my stomach making inquiries about the food situation, I crested the climb and, a short time later, rolled into the lunch stop.

I distinctly remember the first Ol’ Dirty (then called Donna Done Dirty) — riding up Mt. Donna Buang in the freezing cold of winter, and rounding a bend on the gravel road to see a mobile kitchen set up in front of us. That mug of piping hot pumpkin soup was an amazing treat, and Andy has only increased the surprise factor and the impact of every edition since.

Stopping at the lunch stop, “Hotel Ol’ Dirty”, my bike was taken away by valet parking attendants (my dad Ron and Andy’s dad Tony suited up, including in top hats) and then it was through the doors of the hotel room to be greeted by the “hotel staff” (including my partner Sharon) who presented us with food vouchers, Ol’ Dirty-embroidered bath robes and champagne.

The woodfired pizza for lunch, in the middle of nowhere; the hotel room boudoir setup, Miami Vice style; the little touches of detail here and there — the whole setup was so typically vanBergenesque in its extravagance.

When you set yourself the challenge of upping the ante every year, as Andy does, you make things pretty hard for yourself. But Andy and his wife Tammy, with help from some amazing volunteers, always manage to do so, creating a unique experience that those in attendance won’t soon forget.

I spent nearly two hours at lunch, appreciating the hard work that had gone into executing Andy and Tam’s vision, and chatting to the many riders I knew. And when I finally started my descent back towards Marysville, it was with my Ol’ Dirty bathrobe flapping in the breeze and a smile on my face.

The descent itself was rough and rocky in places, but on the MTB I didn’t have to worry about picking a smooth line or avoiding the big rocks — I could sail right through the rocky patches as I barrelled out of the Cathedral Ranges.

The MTB was less suited to the long, slow, just-ever-so-slightly uphill drag back to Marysville on the highway. But I got there eventually, very tired but satisfyingly so. Of the five editions of Donna Done Dirty/Ol’ Dirty I’ve ridden, this one had the hardest course and the most individually challenging sections. And yet (or perhaps because of this) it was still thoroughly enjoyable.

While I’m not in a hurry to return to the impossibly steep 4WD track of the high road any time soon, the ride did leave me inspired to take the MTB and explore the many fire trails and 4WD tracks that litter the hills around Victoria. There truly is a gold mine out there if you’re willing to venture away from the bitumen.

With the weather improving and the days starting to get longer here in Australia, the spring/summer cycling calendar is already starting to shape up nicely. In the coming weeks I’ll be heading down to Lorne for Amy’s Gran Fondo and then, on September 18, it’s time for DD16: The 2016 Melbourne Dirty Dozen. If you like hills and a good, satisfying challenge on the bike, you’ll love DD16. I hope you can join us.

And for those of you asking about the Domestique 7 Peaks Rides this summer, Andy and I will have some info for you soon. Until then though, thanks so much for reading, and stay posted to the site for a video from Ol’ Dirty, coming in the next week or so. (UPDATE: The video is now online. See below.)

Click through to see my Strava file from the 2016 Ol’ Dirty.