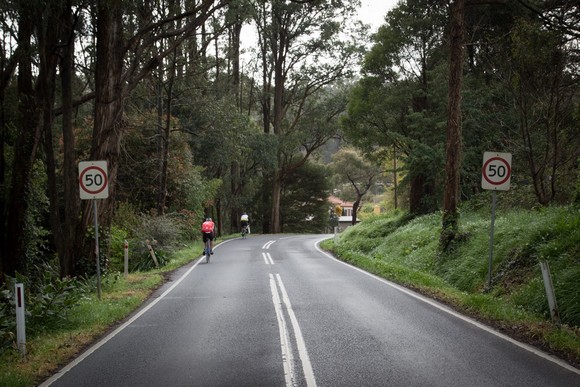 I distinctly remember my first time climbing The 1 in 20. It was a cold and wet winter’s day sometime in 2007 and I had ridden out to the Dandenong Ranges on my dad’s 15-year-old mountain bike. I’d read a few things online about this popular 6.8km climb that local cyclists had long used as a benchmark and I was keen to check it out for myself.

One site I read suggested a time of less than 20 minutes was respectable. “That’s doable,” I thought to myself. “I’m a pretty fit kinda guy.” Dressed in bike shorts, a Bike Camp T-shirt from a high school and a long rain jacket, I must have been a peculiar site as I set off from The Basin.

I had to stop at least once on the way up but for some reason I still figured I was on track to finish in less than 20 minutes. I remember the feeling of abject horror when I reached the top of the climb, panting, and stopped my stopwatch only to see a time on the wrong side of half an hour. It was a real wake-up call.

It was also the start of an on-again-off-again relationship with this famous stretch of bitumen in the Dandenong Ranges.

In the years before Strava, Cycle2max was the go-to site for riders in Melbourne who loved riding uphill. It was a place where you could go to log your best times on a range of climbs and see how you stacked up against fellow riders. My old Cycle2max page tells the story of several visits to the 1 in 20 in the years following that demoralising initial attempt.

In June 2008, shortly after buying my first road bike, I headed out to face the 1 in 20 for a second time. I slashed eight minutes off my best that day, completing the climb in 22:30. Two months later I went two minutes faster again with a 20:24. My initial plan of a sub-20 minute time actually seemed within reach.

It took me nearly a year to get there though, finally clocking a 19:30 in June 2009. And then my progress stalled — it would be another two and a half years before I’d manage to set a new PB.

By December 2011 I’d started using Strava and it was at that point I managed to break 19 minutes for the first time with an 18:37. Getting under 18 minutes would take another two years — I did a 17:40 in May 2013 — and then I’d have to wait nearly three more years for my next milestone.

A couple Sundays ago I was due at a family brunch out the back of the Dandenongs and decided I’d go via the hills and more specifically the 1 in 20. I’d been feeling strong in the lead-up and wanted to see whether that feeling would translate to a better time on the benchmark climb.

Another rider started the climb at the exact moment I did, quickly passing me and sitting maybe 5-10 metres ahead of me. My instinct was to ride up to his wheel and sit in, but I wanted it to be a solo effort. I stayed back when I could and moved further out into the lane when I ultimately caught him.

I’d pass him, he’d pass me, and then I’d pass him again. It was great motivation to keep pushing, all while ensuring I never rode in his slipstream.

The last time I’d set a 1 in 20 PB I’d written notes and checkpoint times on my toptube so I knew where I was at. This time I just rode the thing, judging my pacing by feel and seeing how I went. I didn’t look at the lap timer on my Garmin until the very top, something I’m now very glad about. When I crossed that line and hit the lap button I had the exact opposite reaction to the one I’d had on that first ascent all those years ago.

16:45. I’d been feeling good and covering ground well, but I didn’t think I’d be able to take 55 seconds off my PB. While gasping for air at the top I yelled out something I’d hoped would be “Yeah!” but ended up sounding far less comprehensible. The bloke I’d been riding up with looked around to see what was wrong with me.

A 55-second PB on the 1 in 20 today gives me exactly the same time as my great mate Andy of @hells500. Well chuffed with that!

My new PB had come as something of a surprise but it made some sort of sense. Just a couple months earlier I’d finally started feeling good on the bike again.

While training for the Melbourne Marathon in 2015 I didn’t do much riding and the riding I did do felt very hard. In the months that followed I started riding a little more and finally, in late February or early March, things started to click.

And it wasn’t like I was doing big k’s in training — Strava tells me I’ve only managed 100 to 150km per week this year, and about half of that is commuting. It’s certainly less than I was doing a a few years ago. And yet somehow I’ve found myself feeling stronger on the bike than ever before.

I put that improvement down to a few things: doing the occasional hard Friday lunch ride with the CyclingTips crew (great for developing one’s top end) and the fact I’ve lost a few kilograms.

In August 2014 I wrote a piece here detailing my experience of trying to lose weight over the course of a month. It was a challenging process, counting calories and logging every bit of exercise I did, but at the end of it I had shed 3kg, taking me down to 78.4kg.

In the course of training for the marathon last year I lost another kilo or so and then, towards the end of last year, I weighed myself and discovered I was down to 75kg. Somehow.

It was strange to lose weight without trying, given how hard it had been when I was trying. But once I lost the weight, I found it easy enough to keep it off.

And as I’ve written before, if you want to go faster uphill, losing weight is a pretty good way to start.

If you’re thinking it’s a little self-indulgent to write such a lengthy post about a personal-best time on a popular climb, you’re right. But I’d also argue there’s a message in here for everyone.

Whether we realise it or not, all of us cyclists are on a journey of some kind. From the moment we first jumped on a bike we’ve been learning about what it means to be a cyclist and what we can get out of this great sport.

Since you started road cycling you’ve probably changed what you wear on the bike, the bike itself and I’m willing to bet you’ve also become more competent and confident as a rider. You’ve almost certainly become a stronger rider in the process as well.

Your relationship with cycling might have changed along the way. What started as a commute to work might have evolved into commuting plus racing on the weekends. Or maybe you used to race competitively and now you ride simply for the joy of exploring new roads with your mates.

But throughout it all there’s been one motivating factor that’s stayed constant: the desire to get fitter and stronger. That is, the desire to improve. Last Sunday, on the 1 in 20, I took a huge step forward in that goal.

Sure, it’s not like my time on the 1 in 20 is all that impressive in the grand scheme of things (although my 2007 self would certainly be very impressed). But it’s a big step forward and for me, that’s one of the most satisfying things about cycling — a sense of progress.

But that’s just me. As I said, we’re all on our own journey through the sport and all motivated by different things. I hope you continue to get as much out of riding your bike as I do.

Speaking of which, I really need to head out to the hills to try and set some more PBs before this form wears off!

If you’re a Melbourne-based cyclist, what’s your relationship with the 1 in 20 been like? For those of you outside Melbourne, do you have a similar climb you revisit regularly?