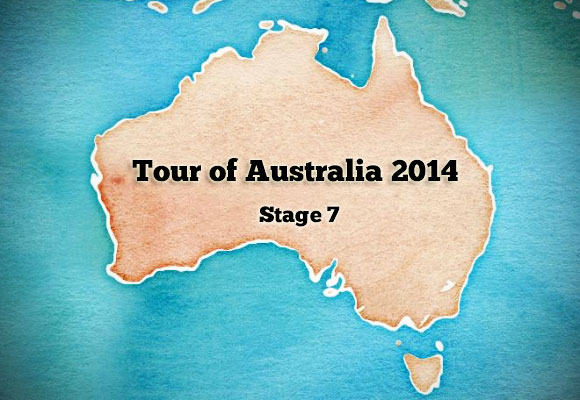 Inspired by the Giro d’Italia, the Tour de France and the Vuelta a Espana, the Tour of Australia is a fictional three-week Grand Tour route created by David Blom and Matt de Neef to showcase some of Australia’s best cycling roads. This is the second year of the race and today we reveal stage 7 of the 2014 edition.

Click here to see stage map and profile at Ride with GPS.

Stage 7 of the 2014 Tour of Australia is the first day of racing after the first rest day and the riders will be met with one of the longest stages of the race. Over 226km the stage heads south west through the vast plains of New South Wales, taking the riders from Bathurst through to Cootamundra.

The race follows the Mid Western Highway out of Bathurst, reaching the first and only categorised climb of the day after roughly 20km. However it’s only a short fourth category climb and after that the road tends mainly downhill (albeit gradually) to the first intermediate sprint in Cowra after 106km.

Between Cowra and Young, where the second intermediate sprint will be contested after 177km, the Olympic Highway is about as flat as can be, barring a short rise on the approach to Young.

There are a few small lumps on the approach to the finish in Cootamundra but it’s more or less a flat run home.

This is pretty much a textbook stage for the sprinters. The teams of the sprinters and the GC contenders will let a break go up the road, but the gap will likely be kept to around six or seven minutes. In the second half of the stage the teams with an interest in a sprint finish will come to the front of the peloton and start increasing the tempo.

The break would likely be caught on the fast run in to Cootamundra, setting the stage up for a routine bunch sprint to end the stage.

For the GC riders this stage provides an opportunity to sit in, protected by their domestiques, and save energy for the lumpier terrain to come.