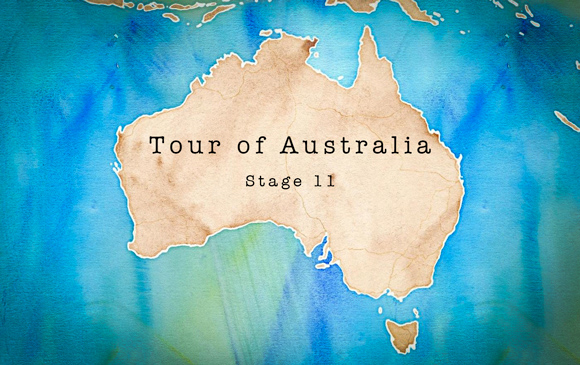 It’s two weeks until the 100th edition of the Tour de France begins which got David Blom and I thinking: what would an Australian Grand Tour look like?

We’ve put together a course for a three-week race that takes in some of the best roads in the country in an attempt to create cycling’s fourth Grand Tour: the Tour of Australia. We’re currently revealing one stage per day in the lead-up to Le Tour and we’re up to stage 11.

After finishing stage 10 in the rural community of Omeo the riders are up for a very challenging 11th stage. The route is essentially a shorter version of the popular but very tough 3 Peaks Challenge, albeit with different starting and finishing points.

Rolling out of Omeo the riders will hit the first climb of the day after less than 10km. It’s a 4th category, 4km rise at 4.2% but in the context of the stage it’s barely a warm-up. It’s certainly the easiest climb of the day.

From the top of that short climb the riders snake their way past Anglers Rest along the stunning Omeo Highway with views of Big River to their right. It’s a gorgeous section of road and one that is positively flat compared with what’s to come.

After 40km, the riders take a left-hand turn and start climbing the Back of Falls. That first turn is affectionately known as “WTF Corner” due to it’s intimidatingly steep start (above 15%). The gradient for the first 9km of the climb is 9% on average.

In all it’s a 23km-long hors categorie climb that gets easier towards the end. But that doesn’t mean it won’t tear the field apart. The sprinters and any other non-climbing specialists will likely have fallen off the back and it will only be a select group is able to push through the ski resort of Falls Creek and into the long descent to Mt. Beauty.

There’s an intermediate sprint point in Mt. Beauty 106km into the stage, after which the field takes a left turn to head up the Tawonga Gap. It’s a 2nd category climb and while it’s not as steep as the opening kilometres of the Back of Falls, it’s steep enough to force a split in the field.

From the top of the climb (and the KOM point) it’s a speedy 13km descent to the Great Alpine Road at which point the riders take a left. The flat run into Harrietville (which arrives after 150km) is one of the only flat sections on the entire stage and you can expect the pace to be high.

There’s an intermediate sprint point in Harrietville after which there’s just one more climb until the end of the stage. That climb just happens to be 30km long.

The Mt. Hotham climb can be broken down into three distinct sections: a sustained opening of 11km, a flatter 9km and then a 10km finale that includes a couple of fast descents and some very steep sections.The summit of the climb and the end of the stage comes at the end of one particularly steep section of climbing, called the Diamantina.

Stage 11 will likely see a breakaway group formed on the Back of Falls climb (if not before) and they might even get a big enough lead to make it up and over Tawonga Gap. If the GC contenders aren’t worried about the riders in the break they might be allowed to take out the stage — if they’ve got the legs. But it’s not hard to imagine a break being swept up on the lower slopes of the hors categorie Mt. Hotham climb before the GC contenders come to the fore.

This stage really is a showcase for the Victorian Alps and spectators, at home and on course, won’t be disappointed. There’s no shortage of sweeping vistas, twisty mountain roads, tough climbs and beautiful native flora to serve as a backdrop to what could be a key stage in the race.

Stay posted for stage 12 of the Tour of Australia, coming tomorrow.