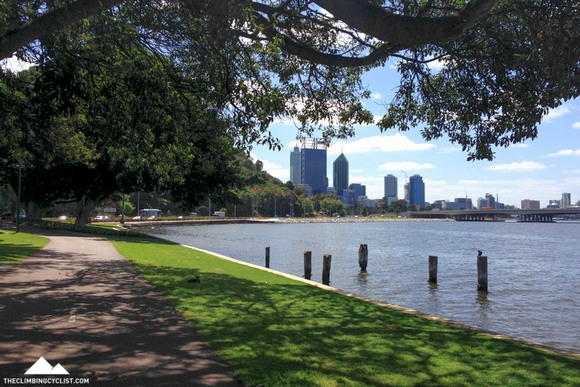 I’ve been lucky enough to explore many parts of Australia by bike. Large sections of Victoria, Hobart, Canberra and Adelaide are all on the list, as too is Perth after my second visit to the West Australian capital last week.

My youngest brother Ash lives in Perth and is just finishing an honours degree in music performance. He’s a jazz double-bassist and on Tuesday evening, supported by his classmates, he performed a set of original numbers to close out his course. It was great to see him, great to see him play, and great to get out of Melbourne for four days and unwind a little.

In addition to seeing plenty of great live music I got the chance to head out for a couple of rides in and around Perth. Before I left Melbourne I got in touch with the folks at Elite Racing Cycles in Perth and inquired about a hire bike. They were good enough to hook me up with a beautiful 2014 Bianchi Sempre Pro Ultegra 11-speed so I could get out and explore Perth and its surrounds.

Day One: Kings Park and a Swan River jaunt

With a family lunch planned on Monday I only had a couple hours in the morning to get out for a spin. Luckily our hotel was just around the corner from the stunning Kings Park.

For those of you not familiar with Kings Park, it sits atop a cliff which overlooks the city and the Swan River and features grassed parkland, botanical gardens and natural bushland. The great views make it a popular tourist attraction, as do the wildflowers and other local flora.

There are also a handful of interconnected roads that run through the park, most of them featuring a gentle climb surrounded by native trees. Given how busy the top end of the park is, I’m always surprised how quiet it is on the roads throughout the rest of the park. I spent a little while riding up and down the park, appreciating my surrounds and the opportunity to be out riding on a Monday.

After riding along every major road in the park (there aren’t that many really) I headed south west to the banks of the Swan River. My plan was to head in the direction of Fremantle along the series of paths and cyclist-friendly roads that stick close to the water. I would turn around at a pre-determined time to ensure I got back to the hotel when I was supposed to.

I hadn’t set out with a specific route in mind — I knew roughly which direction to head in, and I would just follow my nose (and the maps on my Garmin) as I went. Some of the sections I rode were familiar to me having ridden in Perth this time last year, but it wasn’t long until I was in unfamiliar territory, and relishing the opportunity to be exploring by bike.

About the time I was set to turn around I stopped and tried to decide which way I should go. A quick look at the map seemed to show that it was just as quick to continue the way I was heading, cross the Swan a little way downstream, then come back up the other side, creating an elongated little loop. I set off in that direction, deciding it made sense to avoid retracing my steps if possible.

I was happy with the decision but after a few minutes I found myself stopping again, unsure of myself. Was it really just as quick to go this way? I’m glad I checked. I’m not sure where I thought I saw a bridge because it turns out I would have had to go all the way to East Fremantle to cross the river. It’s fair to say I would have been a lot later than planned.

I turned around and headed back the way I’d come, glad I’d thought to stop and check the map.

The ride back into Perth was lovely — the sun was out, the temperature was in the mid 20s — perfect. I continued past The Old Brewery, underneath the Kings Park lookouts, then headed back to the hotel ahead of schedule.

Check out my Strava file from the ride here.

With a bit more time up my sleeve on Tuesday I was keen to get out and explore beyond the Perth city limits. I was also keen to see what Perth and the surrounding region had in the way of hills.

The guys at Elite Racing Cycles had suggested I head out east in the direction of Kalamunda. They explained that the hills out that way aren’t as imposing as some of the climbs we have here in Victoria, but they’re still worth a look. They pointed me in the direction of Kalamunda and a nice little loop that passed by Mundaring Weir, one of the dams featured in Perth’s tough 5 Dams ride.

Before setting off I made the decision to plot out a course that I could upload to the Garmin and follow. This is always a bit of a trade-off: one on hand you simply have to follow instructions and don’t waste time constantly checking a map to see if you’re heading in the right direction — good if you don’t have the whole day to play with. On the downside you lose a lot of the spontaneity of a Forest Gump-style, see-where-this-takes-me-type ride. While I had the whole morning to play with, I still needed to be back by lunch so following a course seemed the way to go.

I’d come into the weekend having been sick for most of the week before (again). And while I was feeling pretty much fine again by the time Tuesday’s ride started, I was still nervous about how I’d go in the latter stages of the ~90km ride.

I’d soon have a more immediate problem to deal with. 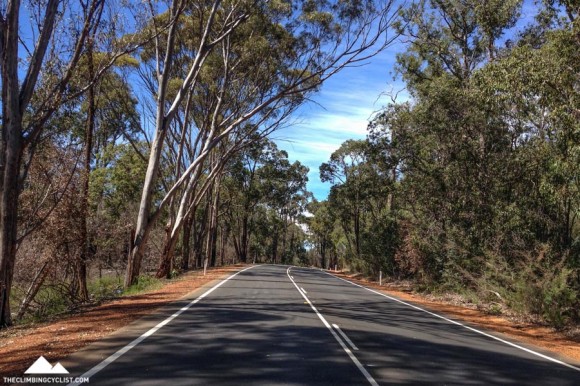 My foot slammed into the ground, unbalancing the bike and causing a bit of a wobble, but I managed to keep it upright. The bigger problem was that after my foot slipped out of the pedal, my calf had then slammed into that pedal with considerable force, causing me to yell out.

I think the adrenaline masked much of the pain to begin with, but it wasn’t long before it was hurting to pedal. Should I turn around? I decided to push on, figuring I’d simply corked the muscle, and that I could turn around a little further on if I needed to. 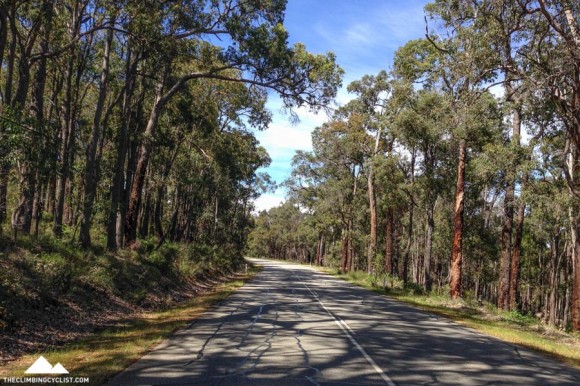 From the centre of Perth I followed a bike track alongside a train line out towards Midland, barely having to ride on the road for the first 15km. Both times I’ve been to Perth I’ve been thoroughly impressed by the multitude of bike tracks that seem to criss-cross the city. I was particularly impressed by the fact that every train line seems to have a bike track running alongside it. And then there’s the Kwinana Freeway which heads out towards Fremantle, which feature a multi-lane freeway, train line and bike track all in one. Smart transport design.

The ride out towards Midland was easy and fast and from there I headed east into the hills. The road I took initially was quite busy, but after a few kilometres and a couple of turns the traffic thinned right out and I was more or less on my own.

From what I can tell from my brief visit, it seems like the hills around Perth are very different to the Dandenongs. You don’t have the lush green ferns that you see alongside The Crescent or Perrins Creek Road, for example — instead the foliage consists more of wildflowers, scrub and iron-red dirt. It’s arguably not as beautiful as the ‘Nongs, but I sure wasn’t complaining about being out on the bike, in the hills, in perfect weather, on a Tuesday morning. Bliss. 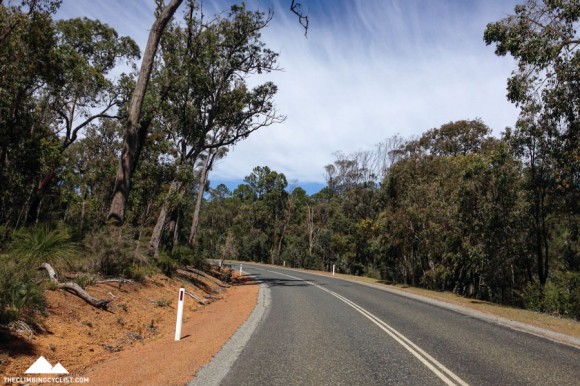 Looking at the profile of the ride on Strava (see below for a link) I can see that the longest climb I did for the day was no more than 3km long. There were probably about five climbs of between 2km and 3km on the day, most of them reasonably gentle but with a couple of short, sharp rises to contend with. It was nice to be out doing some climbing after the much flatter ride of the day before, but with my calf giving me a little bit of grief, and a gear setup I wasn’t really used to (what I’d guess as a standard crankset with 26-tooth cassette, vs the 34×28 I normally ride) it was a little more challenging than it might have been.

The descent from Mundaring down to the weir of the same name — on the north-western edge of the Helena River Reservoir — was fast and fun, and the climb back out the other side was a nice little challenge.

After a few little ups and downs it was into the last real climb of the day which took me out of the bush and into the town of Kalamunda, a suburb on the eastern outskirts of Perth.

I wish I’d stopped by the side of the road and taken a photo of the view into Perth as I descended out of Kalamunda. The steep descent provided several great vantage points over the city and by the time I’d decided I’d stop, the good views were gone. You can get a sense of the views here, but the screengrab doesn’t really do it much justice.

From the bottom of that descent it was a mostly flat ride back into town on what turned out to be some pretty busy roads. The route I’d originally planned out had taken me along a bike path back into town, but I was keen for a quicker run and opted for some of the more direct roads. They were direct, but they were also positively bustling compared to the quiet roads I’d been riding an hour or so earlier.

I got back to the hotel well ahead of schedule and rode the 2km up to Kings Park to meet the family. It had been another enjoyable day on the bike, highlighted by some perfect Spring weather. My calf had been sore for most of the ride, but not enough to stop me from completing the ride.

Check out my Strava file from the ride here.

It was only a short trip to Perth but it gave me some much-needed time away and a satisfying combination of family time and time out on the bike. I was very happy to find the time for a couple of rides, particularly given I was sick earlier in the week. I’ve written more than enough words in the past year or so about feeling sick so I don’t need to repeat myself now, but let’s just say it was a great relief to string together a couple of rides and to feel like things are heading in the right direction again.

It’s always enjoyable to travel interstate (or internationally for that matter!) for a holiday and I find that incorporating cycling into such trips takes them to another level. There’s something inspiring and motivating about getting to ride on roads you’ve never ridden before, and you see the world in a different way from the seat of a bike. I look forward to more opportunities to explore Australia and the world by bike.

In closing I’d like to say a big thanks to Marty and Paul at Elite Racing Cycles in Perth for hooking me up with a bike, looking after me, and for pointing me in the direction of Kalamunda and Mundaring Weir. I had a great time.

And, of course, thanks to you for reading!

8 Replies to “Two days of cycling in Perth”