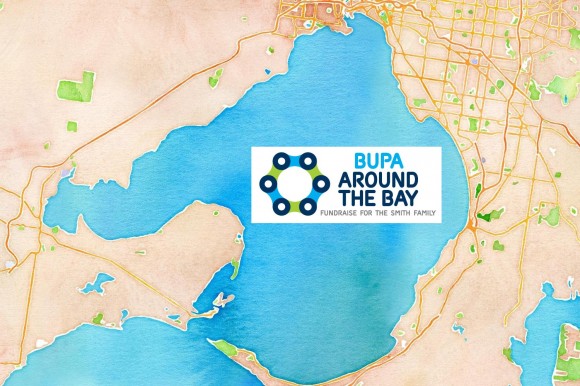 It’s been an impressive 20 years since the first Around the Bay in a Day and in that time the event has grown to become Australia’s largest mass participation bike ride. Sunday’s anniversary edition of ATB was the biggest yet, attracting 17,000 riders who chose from six possible ride distances and 10 possible routes.

Now, long, flat rides aren’t normally my cup of tea — I’d rather be out in the hills clocking up the vertical metres, summiting peaks and enjoying the views. But when Bicycle Network Victoria invited me along to ride in my third ATB I happily accepted. And I’m glad I did.

I chose the same ride option I had in 2008 and 2009 when my brother Brendan and I completed back-to-back ATBs: 210km clockwise around Port Philip Bay. With my regular ride companions not riding in the event or opting for a different ride option I knew I’d be spending most of the day riding on my own. Well, as ‘on my own’ as I could be with 17,000 other riders around me.

I set off from Alexandra Gardens at around 6.20am having placed myself in the 30-35km/h average speed bunch. My goal for the day was a simple one: finish within the average speed bracket I’d selected. With the ride being 210km long I’d need to go under 7 hours (not including time spent on the ferry and at rest stops etc.)

From previous ATBs I knew that the start was a bit of a jostle for position and that it would take a while before I’d be able to get up to speed. Whether it was the group I was in or something else I’m not sure, but I was able to get into a rhythm much easier than was possible in previous years.

Heading out through Port Melbourne I turned onto Beaconsfield Parade/Beach Road and began the first half of the ride. I found myself in a couple of small groups as we made our way south, but not for long. I’d sit in for a while to rest up and then, when the pace felt too slow, I’d try to bridge across the gap to the next group of three or more riders on the road.

This seemed to work pretty well and even when I had to burn a bunch of matches to get onto the next group, I always had time to recover before pushing on again.

Somewhere near Frankston I got into a group with another three guys and together we picked up the pace and pushed up Olivers Hill (for a PB), through Mt. Eliza and then through Mt. Martha. With Bicycle Network Victoria asking all riders to wear the official jersey for the ride, it was often hard to keep track of who was who, which riders I was supposed to be following and which riders were going slower. Everyone looked much the same and it was almost like this, albeit with pale blue cycling jerseys … and far less kung fu:

But there was one guy in a black and green TFM jersey who was easy to spot amid the sea of pale blue. He was moving along at a decent clip and so I tried to follow his wheel for as long as I could.

The weather forecast had suggested we’d be in for a mostly dry day with a south-westerly breeze in the afternoon. This suited me perfectly — I’d be heading north-east, towards Melbourne, in the afternoon and the wind would help me along. But I had to get there first.

When we reached Safety Beach we were far more exposed than we had been earlier and it became a bit of a slog. The bloke in the TFM jersey had disappeared up the road and it was left to myself and two other blokes to take turns pushing into the wind.

It felt good sitting at the front, working for those other guys, even though I’d never met them before. They’d thank me every time I finished my turn and I’d do the same whenever they finished theirs. We pushed hard through Dromana, Rosebud and Rye and the whole time I was keeping an eye on my average speed.

We arrived at the Sorrento ferry port quicker than I was expecting with 96km in the legs and with an average speed approaching 32km/h. It was 9.30am when I got there and after a short wait it was time to load my bike onto the ferry (with what must have been a thousand others) and find somewhere to sit for the 40-minute voyage across the heads to Queenscliff.

The ferry trip is always a bit of a mixed blessing in my book. On the one hand if gives you a logical half-way point (almost) to aim for in the opening stages of the ride, it gives you a chance to rest and recover, and it gives you a chance to have something to eat before tackling the second half of the ride. On the other hand, being off the bike for the best part of 90 minutes sends a pretty clear signal to your legs that it’s time to rest and start recovering. As a result, getting started in Queenscliff is always a real struggle.

Wade kindly asked if I was riding with anyone and, when I said I wasn’t, whether I’d like to join them. I knew my chances of staying with the likes of Wade, Peter, Alison and Mark Guirgus all the way back to Melbourne were slim to zero — they’re all A-grade riders after all — but I figured I’d see how long I could hang on.

They mustn’ve been pushing too hard because I was able to stay with them for the next 60km or so from Queenscliff, through Leopold up to Geelong and beyond. Meeting up with those guys was perfect timing really — that section from Queenscliff to Geelong is, in my opinion, the dullest section of the ride.

But rolling along next to Wade, chatting about this and that, the kilometres flew by. To be fair, when I say ‘chatting’ I mean ‘struggling to spit my words out in between laboured breaths while Wade looked as if he wasn’t even busting a sweat’. On a couple of the climbs between Leopold and Geelong I thought I was going to get dropped for sure but I got lucky when traffic lights stopped the guys ahead of me.

Once we got through Geelong and onto the freeway it was time to see if the south-westerly breeze had stuck around or whether we’d be riding back home unassisted. Thankfully we had a considerable tailwind and our bunch, led by Pete and Mark, flew up the freeway towards Melbourne.

For roughly 10km out of Geelong I hung onto the back of the group, sitting on about 45km/h reasonably comfortably. After a while though, the ~150km in my legs and the fact I’d been trying to keep up with Wade and the 3 Peaks Pro Team for 60km caught up to me. My legs started to give me grief and when Pete and Mark upped the ante to be sitting on close to 50km/h I was done.

I sat up, resigned to the fact I would be riding the last ~60km back to Melbourne alone. Before I knew it Wade and the Pro Team were 50m ahead, 100m ahead … it’s scary how quickly a group like that can be out of your reach the moment you fall off the back.

I wasn’t too worried though — I’d had a good run and I’d gotten through the toughest part of the ride with my average speed still hovering above 31km/h.

After a quick break at BP to grab a drink and use the facilities I was back on the road, sitting at roughly 40km/h as I tried to find a group to ride with. Sadly, the field was so spread out by that point that groups of more than two riders were hard to come by. I burned far too many matches trying to get across to two guys who had zoomed past me. No sooner had I latched onto the back than I was falling off into no-man’s-land again.

At that point I realised the tactic I’d employed on the eastern side of the bay simply wasn’t going to work — I didn’t have the legs to ride hard between groups. Instead, I decided to slow down a bit, trying to find a rhythm so I could grind out the last 50km in something resembling comfort.

Before I knew it I was off the freeway and onto the dead roads of Werribee. This slowed me down a bit but I can’t really complain — the wind was still at my back and I was able to maintain an average speed in excess of 31km/h.

From Laverton the route started to take a few turns here and then and it was with some trepidation that I approached a couple of intersections. On one of the two ATBs Brendan and I had done together we ended up riding 10km in the wrong direction due to some dodgy signage. Despite one sign on Sunday having been blown around the other side of the pole it was attached to, I managed to find my way through to Altona and Williamstown without any missteps.

By this point, I was well and truly starting to count down the kilometres. I’d notched up 200km on my Garmin and thought to myself: ‘Great, only 10km to go!’. But a few kilometres later a sign by the roadside said ’15km to go’ and for a moment I felt a mixture of anger and disappointment. Then again, what’s an extra 9km when you’ve ridden 210km?!

The last hurdle for the day was the challenging climb up the Westgate Bridge which is normally off-limits for cyclists. I say ‘challenging’ because normally, with 200km in the legs, the ~1km climb is a painful, wind-affected slog. But with a screaming tailwind pushing me up the bridge it felt considerably easier than I was expecting.

Truth be told, the hardest part of climbing the Westgate was the two brief sections in which I was riding back into the wind in order to get onto and then off the bridge. It was in those moments that I realised how grateful I was for not having chosen the anti-clockwise ride option.

With the Westgate out of the way it was only another 8km to the finish. As is always the case in these situations, my legs felt considerably better the moment I knew I was within 10km of the finish.

Eventually, after stopping at far too many traffic lights on City Road, I took the satisfying left turn onto Boathouse Drive and rode across the finish line. Even with the extra 8km that I hadn’t counted on, I’d managed to beat my goal time of 7 hours by 2 minutes: an average speed of 31.3km/h. Success!

I’d like to say a big ‘thank you’ to Sharon for dropping me off in the morning and for seeing me cross the finish line that afternoon. Thanks too to Sharon’s parents Murray and Betty for being there when I finished — it was much appreciated!

Thanks to Wade, Alison, Pete and Mark for letting a slow, unpro, hairy-legged hack join them for a fair chunk of the ride. It was great fun, a great challenge and a real eye-opener.

And finally, thanks to Emma Bolger and the team at Bicycle Network Victoria for the invite and for another brilliantly organised event. Despite riding ‘alone’ for a large chunk of the day I still had a great time and finishing Around the Bay for the third time is tremendously satisfying!