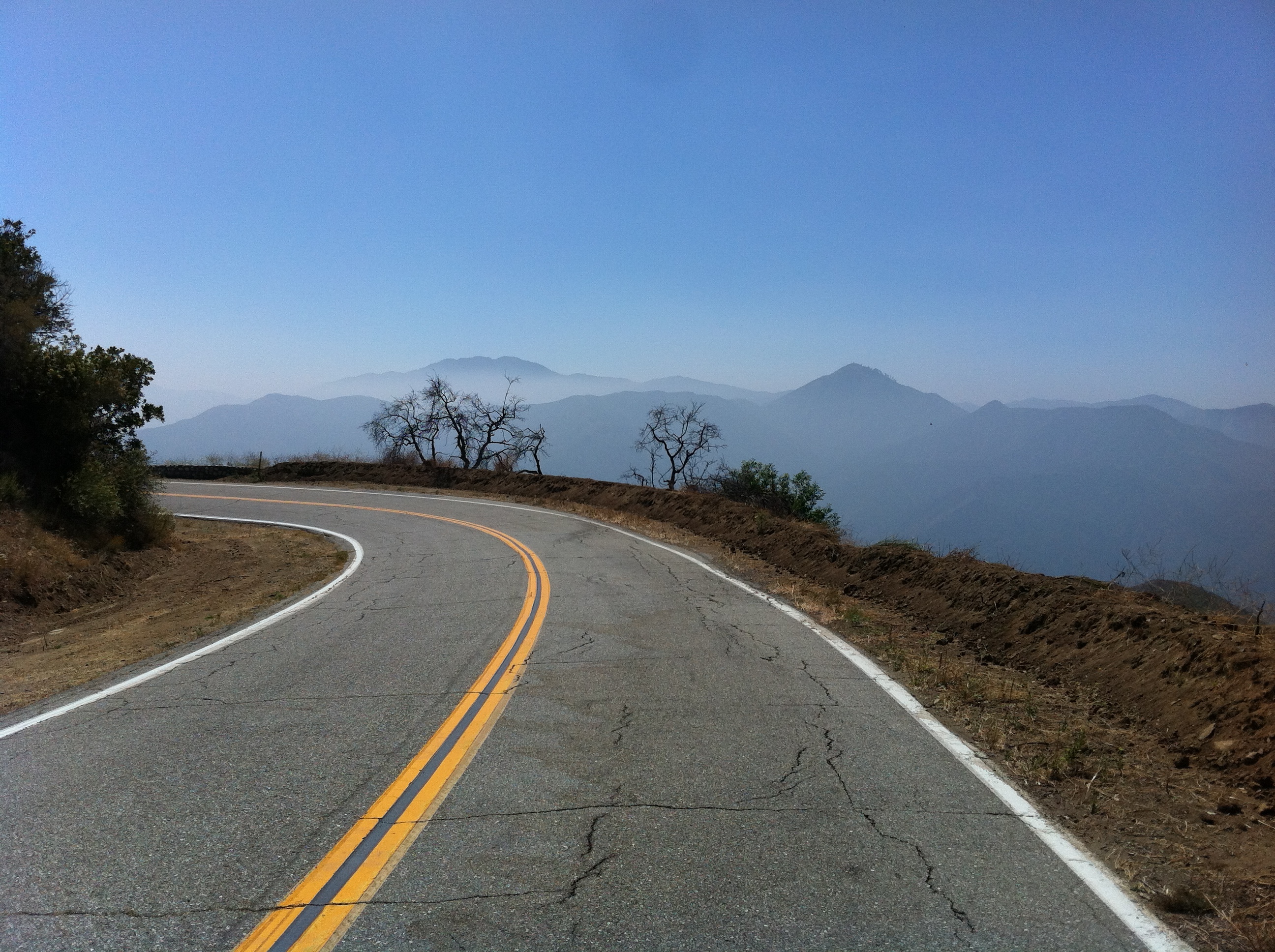 Ever since I booked my flights to the US, I knew I wanted to climb Mt. Baldy. It’s a climb that featured in this year’s Tour of California, it’s reasonably close to LA where my brother Ash and I would be staying for four nights, and it’s billed as the hardest climb in Southern California. How could I not try it?

Given I hadn’t taken my bike with me to the States (too many buses to catch), I needed a hire bike for my attempt at Mt. Baldy. The first place I called didn’t have any road bikes available to rent, but the second store had a 56cm Kona carbon-frame roadie I could have for $50 a day. Awesome.

So early on Thursday morning I walked the 10 minutes from our hotel to Pershing Square station in LA, caught the train to Union Station then transferred to a MetroLink train to take me east. After roughly an hour I got off at Claremont station, jumped on a connecting bus and eventually arrived at the bike shop in Pomona.

After signing some paperwork and having my pedals and saddle fitted, I was off in search of Mt. Baldy. I thought about leaving my backpack of clothes and other assorted items at the bike shop but decided that, without a map, I would need my iPad to help me navigate should I get lost.

Rookie mistake. But more on that in a moment. 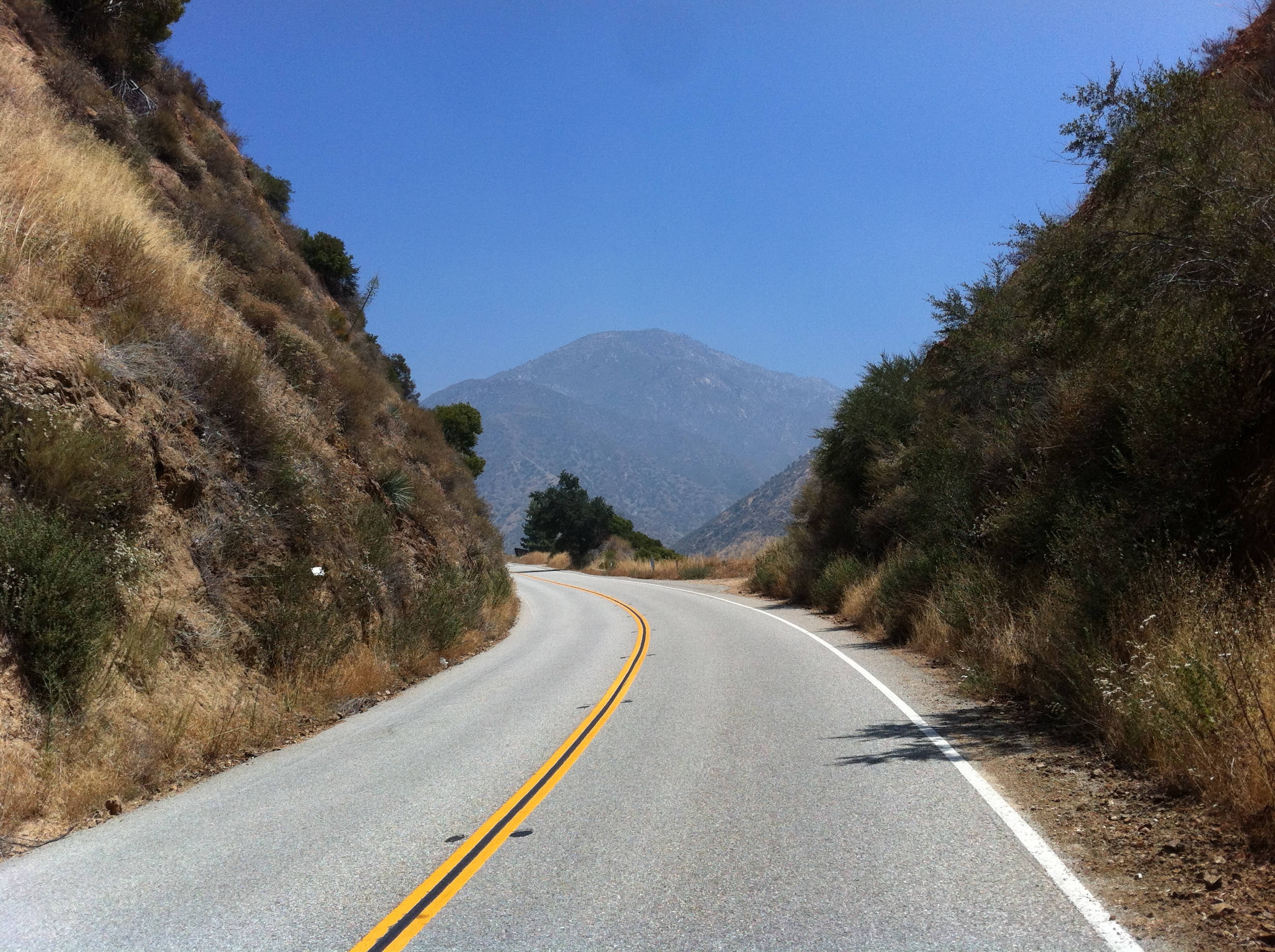 I headed north on Towne Avenue and took a right at Baseline Road and after a while, a left on to Mills Avenue. From here I knew I just had to follow the same road all the way to the top of the mountain.

The climbing started straight away and it didn’t take long to realise that the climb was going to be much harder than I had expected. A steep ramp (~10%) a few kilometers into the climb had me working much harder than I would have liked and my plan soon changed from ‘ride this whole thing at threshold’ to ‘just get up the damn thing any way I can!’

From that very first ramp I was cursing the decision to take my 5kg+ backpack with me and in hindsight, I should have trusted my navigation skills and left it at the bike shop. (As it turned out, i didn’t need to use the iPad once).

It wasn’t just the extra weight that made the backpack annoying (although that was freaking annoying), it also meant I was sweating more than usual and whenever I got out of the saddle, the pack would swing back and forth, ruining my rhythm. Needless to say, a bad decision. 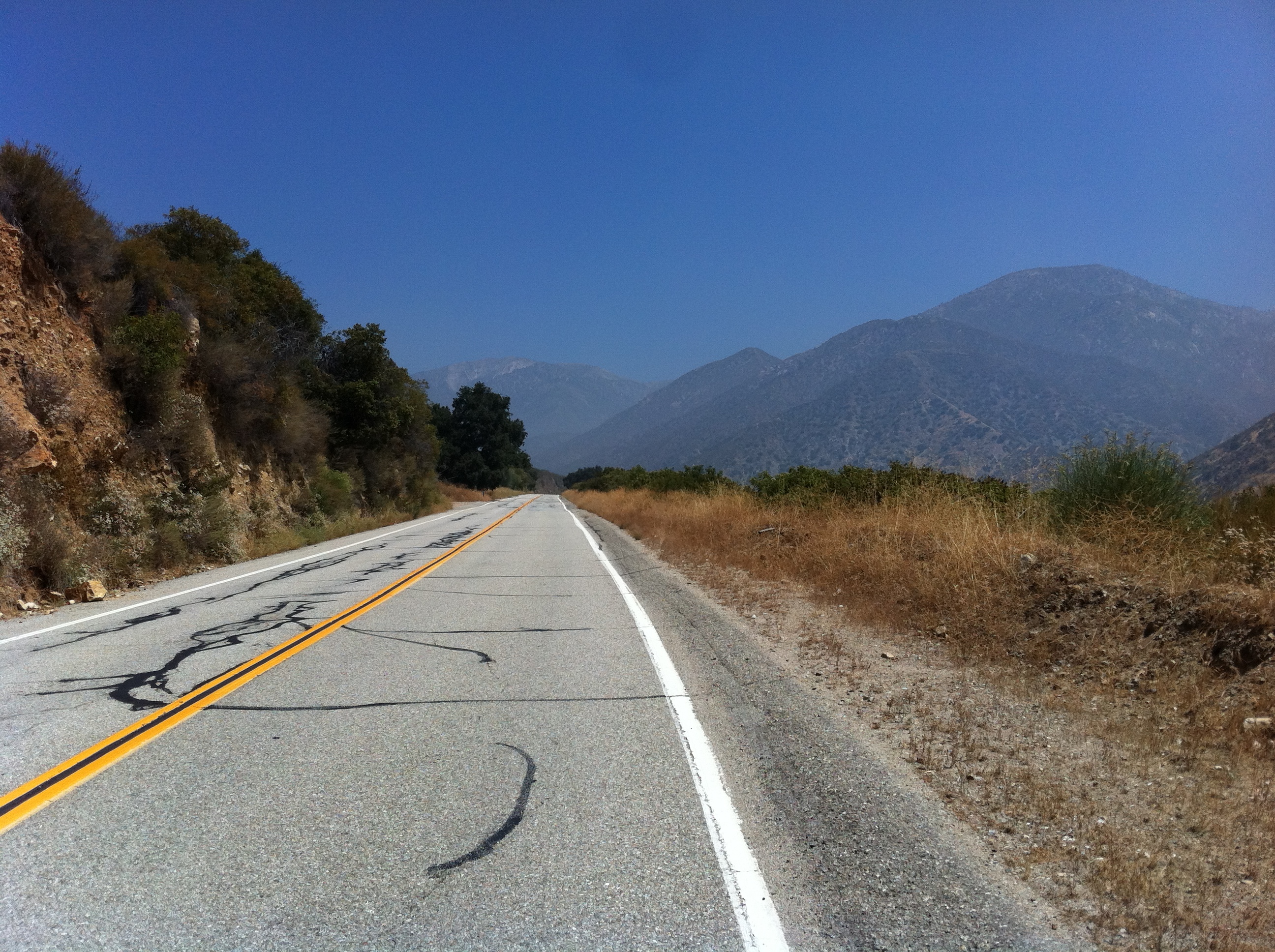 I went into the climb having done an unusually minimal amount of reconnaissance. All I knew was that the end of the climb was very steep and that the two tunnels the road passes through signal the start of the hard stuff.

When I saw the first of the tunnels and I was already struggling I had to repress a feeling of dread — what horror awaited on the other side? Luckily, the road didn’t disappear upward at some horrendous gradient but it did have me in all kinds of difficulty due to its sustained nature. After a few minutes I did something I haven’t had to do for a long time while climbing. I stopped.

It was a demoralising moment, and one I thought I wouldn’t have to experience on the bike again. I’m used to being able to push through the tough parts without having to stop, but not on Thursday. I pulled over into the shade, once again cursing my decision to bring the backpack. 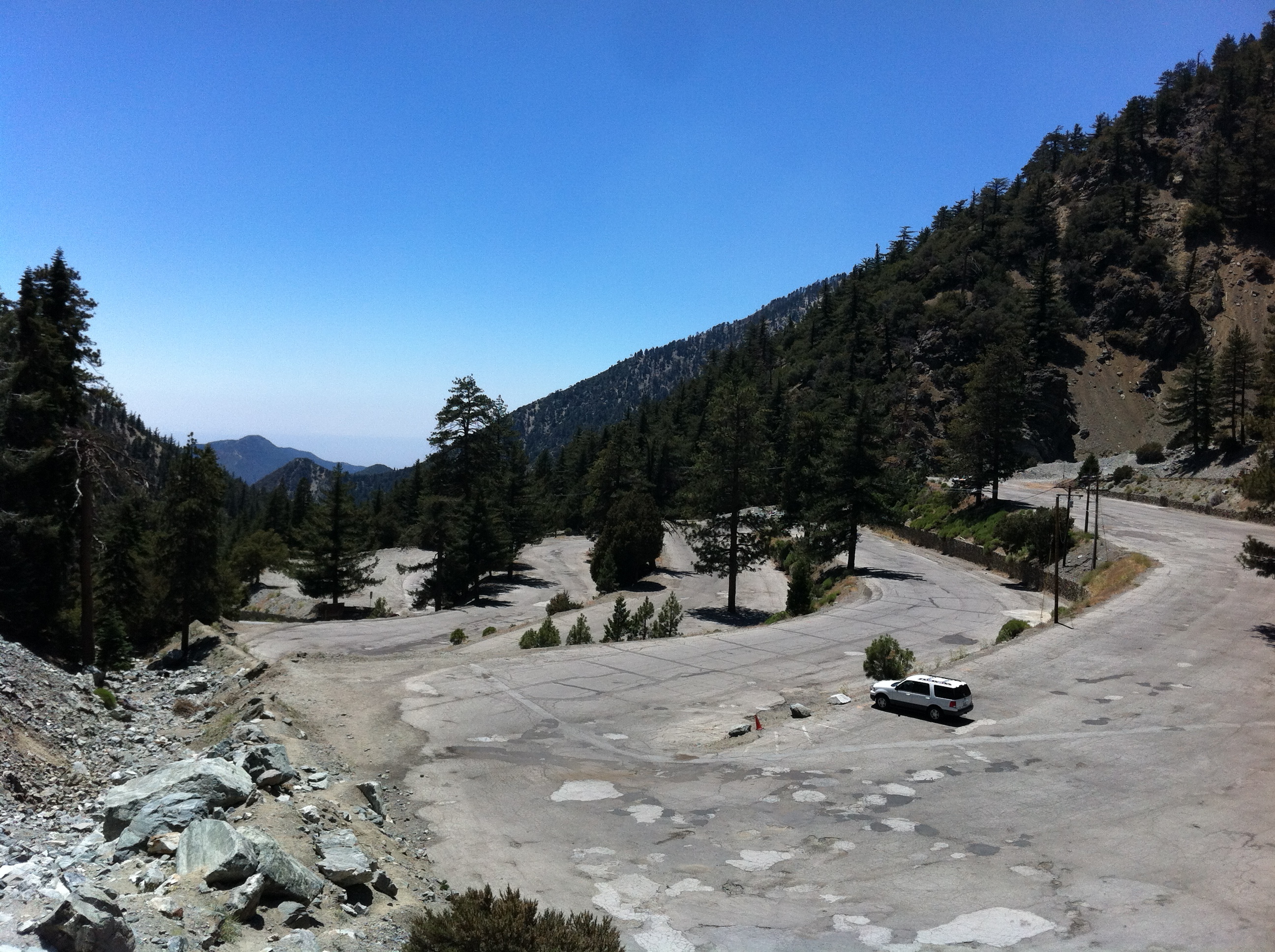 In reality, it was probably a combination of factors that made the climbing so hard. There was the backpack, there was the fact the hire bike didn’t have the range of gears my bike back home has (I think it was a 34×25), there’s the fact that I’ve done less cycling of late than I normally would (due to being on holidays) and then there was the heat.

Throughout most of the climb my Garmin was reading 35 degrees plus. On at least three separate occasions I looked down to see 37 degrees — not pleasant when your body is still in Melbourne winter mode!

All excuses aside, I simply didn’t have the strength or fitness to get up the mountain without stopping. As I said, it was disappointing to have to stop, even more so when I had to stop a number of times. 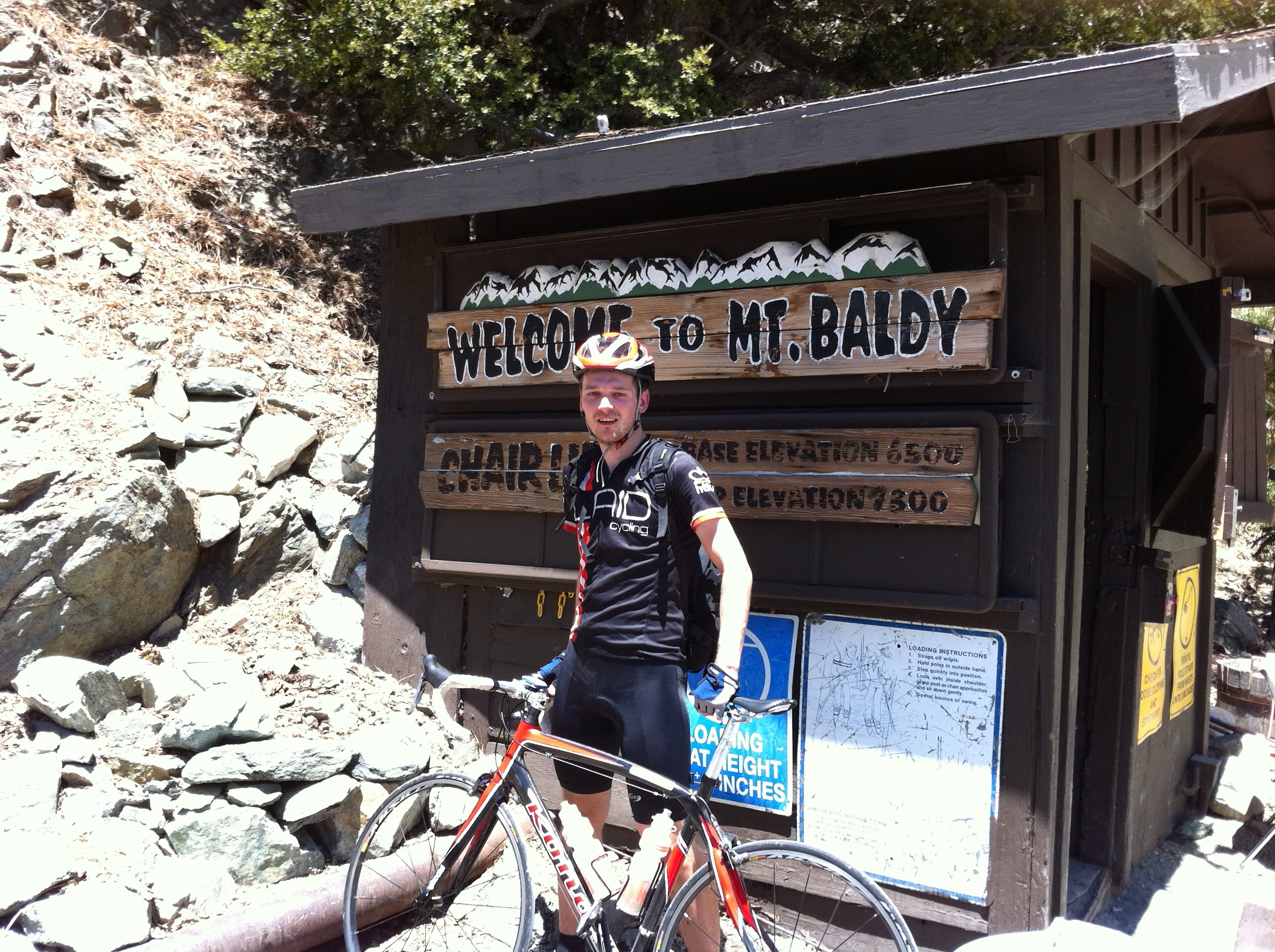 I reached the Mt. Baldy village after about 10km of climbing, not really knowing how much further it was to go. As I continued on, the road got even steeper with the gradient never seeming to drop below 10%. Many of the tight switchbacks must have touched 15%+.

But somehow, as the road got steeper, I managed to find a bit more of a rhythm. Sure, it was still really tough going and sure, I was spending most of the time at less than 10km/h but I was getting through it. With the bigger gear than I’m used to and the many sustained steep ramps, I was weaving all over the road, something I haven’t had to do since climbing Mt. Baw Baw the first time with a 39×26.

As I continued on I started to recognise some of the corners from the footage I’d seen of this year’s Tour of California (see video in link above). Problem was, I couldn’t remember how far those corners were from the top, so it was back to grinding until the road ran out.

When a sign ahead said ‘dead end’ I knew I was getting close. At the ‘dead end’ I took a left turn and followed a very rough bit of road up the final, considerably easier section of the climb to the ski lifts. As I rounded one final corner I saw the ski lifts ahead and realised I’d made it. Sure, I’d had to stop a handful of times and sure, my Strava time would be woeful, but I’d gotten through it in one piece. 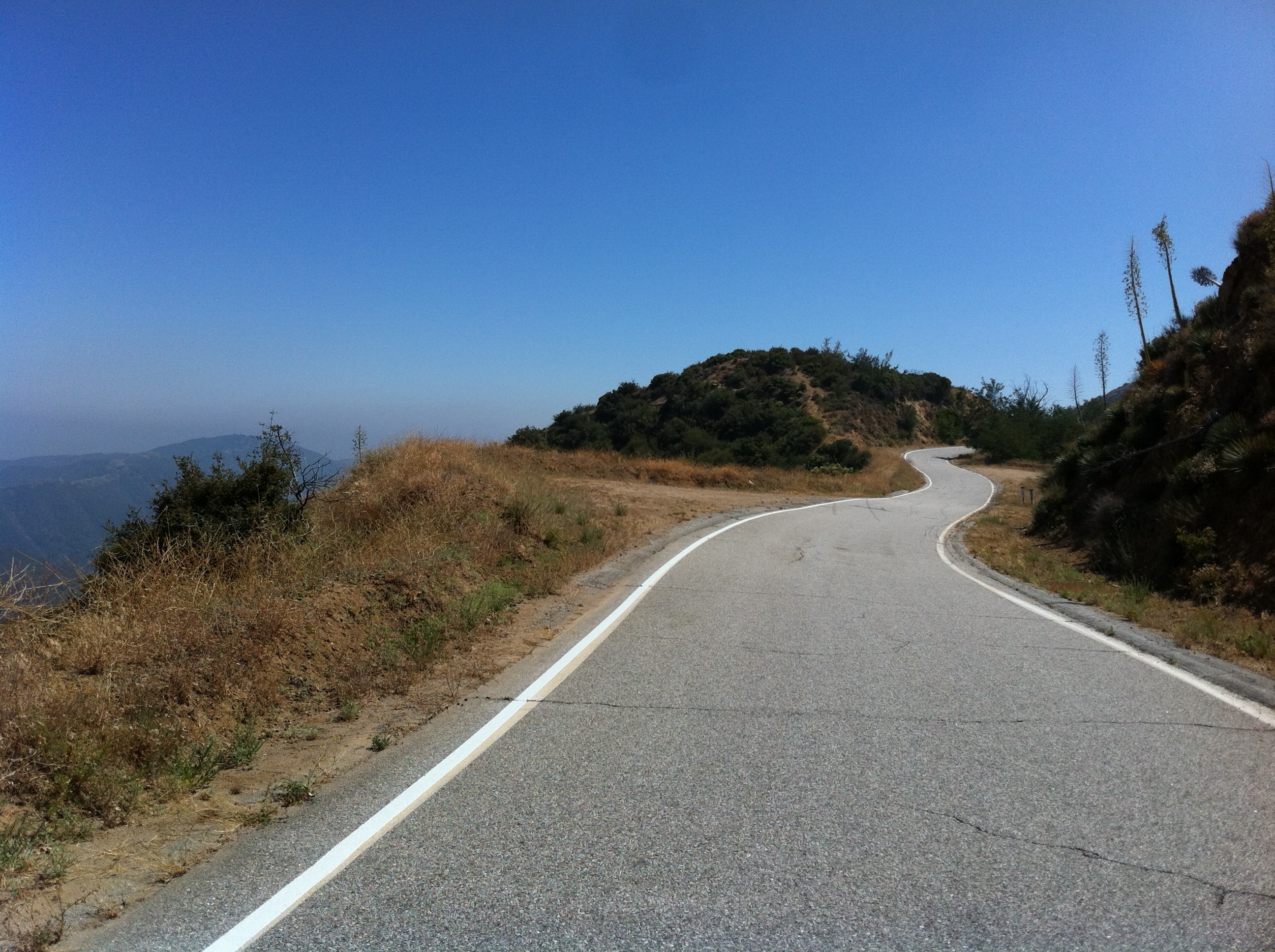 After a quick photo at the ski lifts, it was back down to the village to get out of the sun and have something to eat and drink. My plan from there was to climb up to Glendora Ridge Road and follow that along the ridge, and all the way back down the mountain. The images of the road I’d seen on Google Street View looked stunning and I certainly wasn’t disappointed when I experienced it in real life.

After a kilometre-or-so-long climb from the village up to the ridge line I was presented with amazing views of the valley and Mt. Baldy on the right. For the next 30km or so, I worked my way along the ridge line, sometimes climbing, sometimes on the flat, but largely descending. The views seemed to get better as I went along and with virtually no traffic on the road, it was a wonderful reward for my efforts on Mt. Baldy. 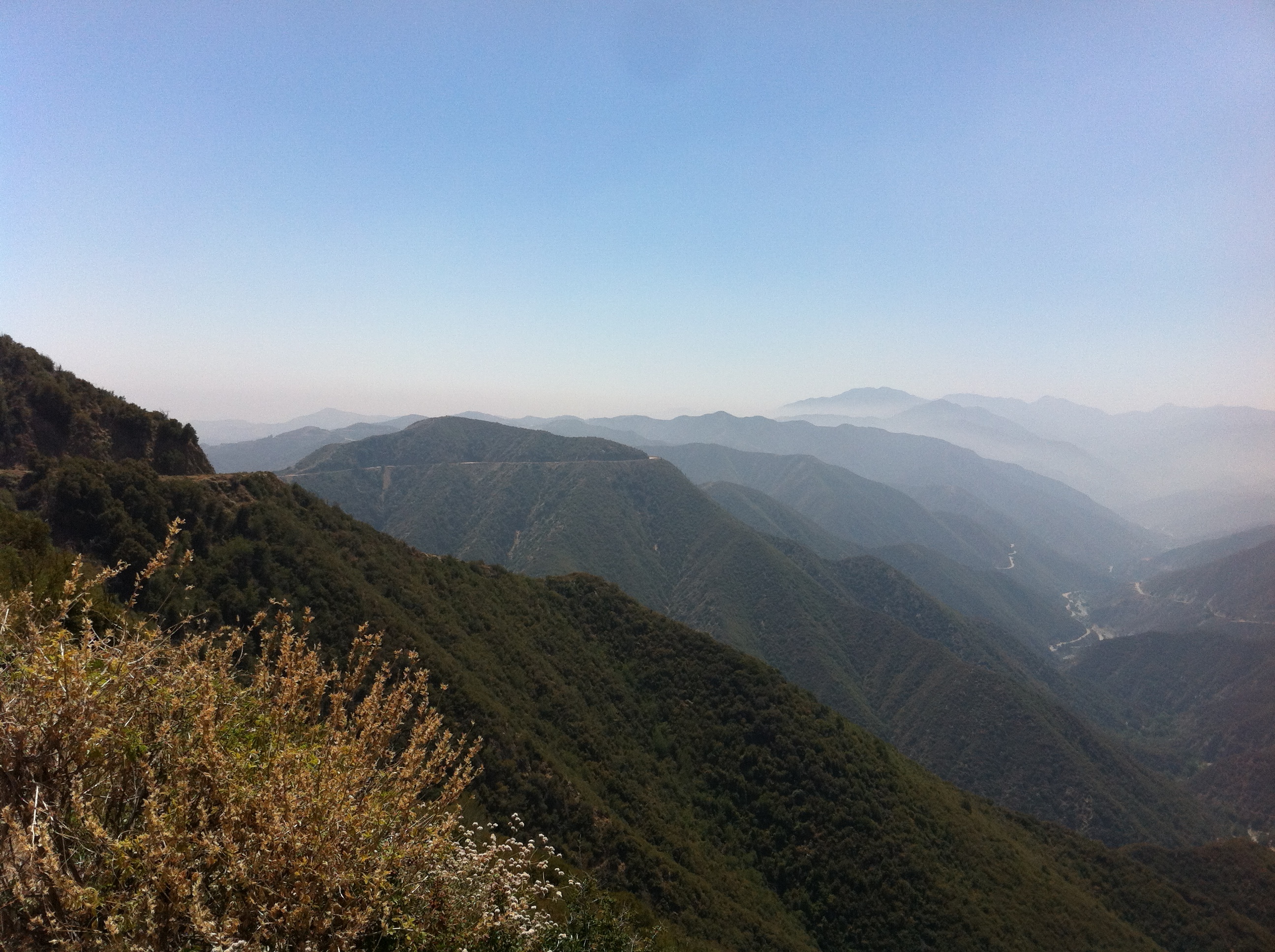 Sometime toward the end of Glendora Ridge Road the road changed tack slightly and views on the left of the road, toward the east LA area, became possible. In the last 10km before Glendora, the descent became more sustained and I found myself flying down the mountain at speed — one of the only advantages of carrying excess weight. As I descended through the many sharp corners, I suddenly realised that I was riding on the right-hand side of the road. 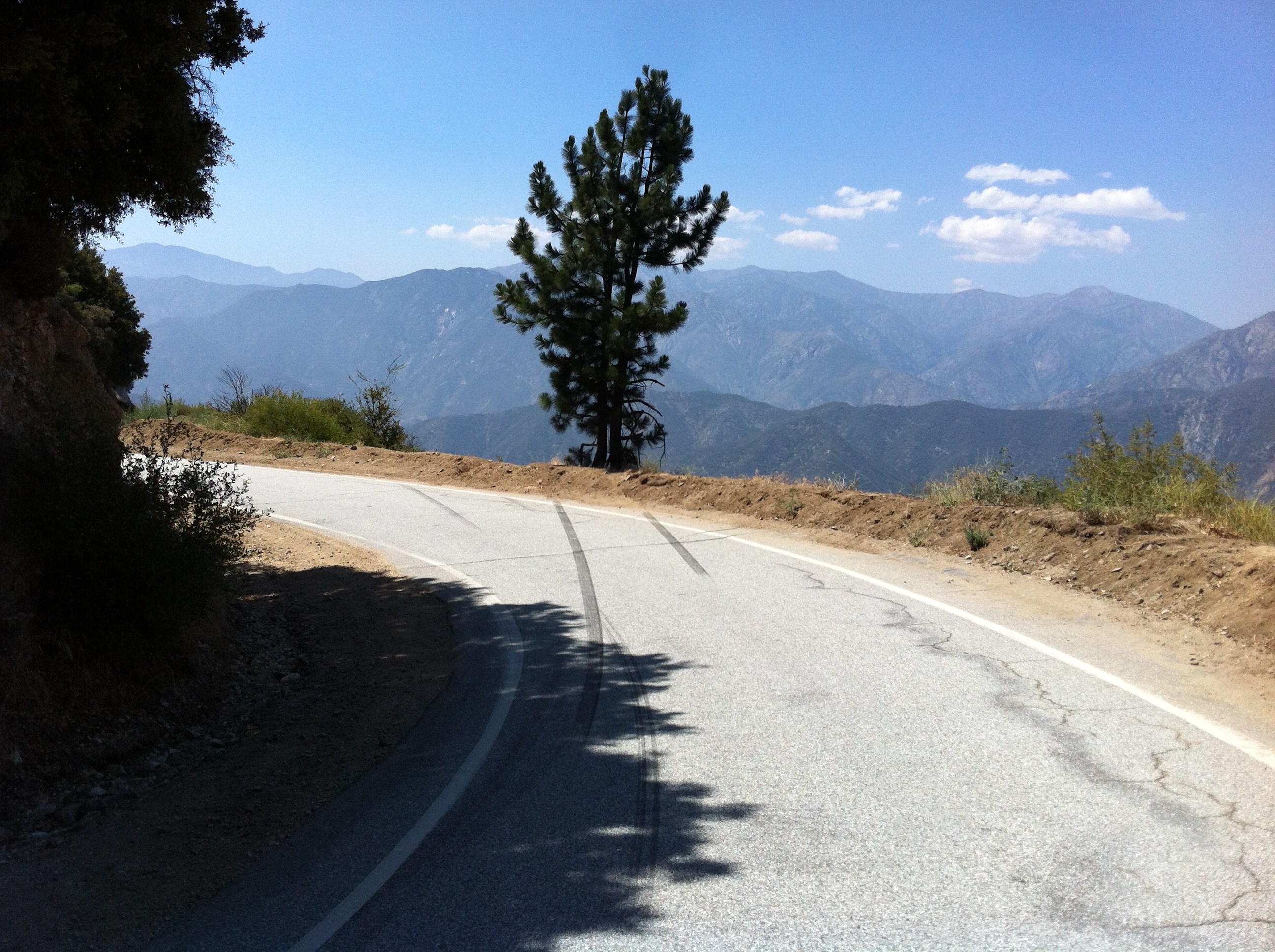 Back in Glendora I still had plenty of time before I needed to take the bike back (despite the painfully slow climb up Mt. Baldy) so I decided to ride past the bike shop for a bit, then turn around and come back. It was cool to see more of Southern California and the famous Route 66. There are some really nice neighborhoods nestled there at the foot of the San Gabriel Mountains — Claremont and San Dimas seemed particularly nice, with green, leafy streets and nice suburban homes.

I got back to the bike shop having done a touch over 100km for the day and feeling utterly exhausted. I was almost certainly dehydrated and with the sun pounding down all day, I was lucky to get away with only a modest amount of sunburn (despite reapplying many times throughout the day). 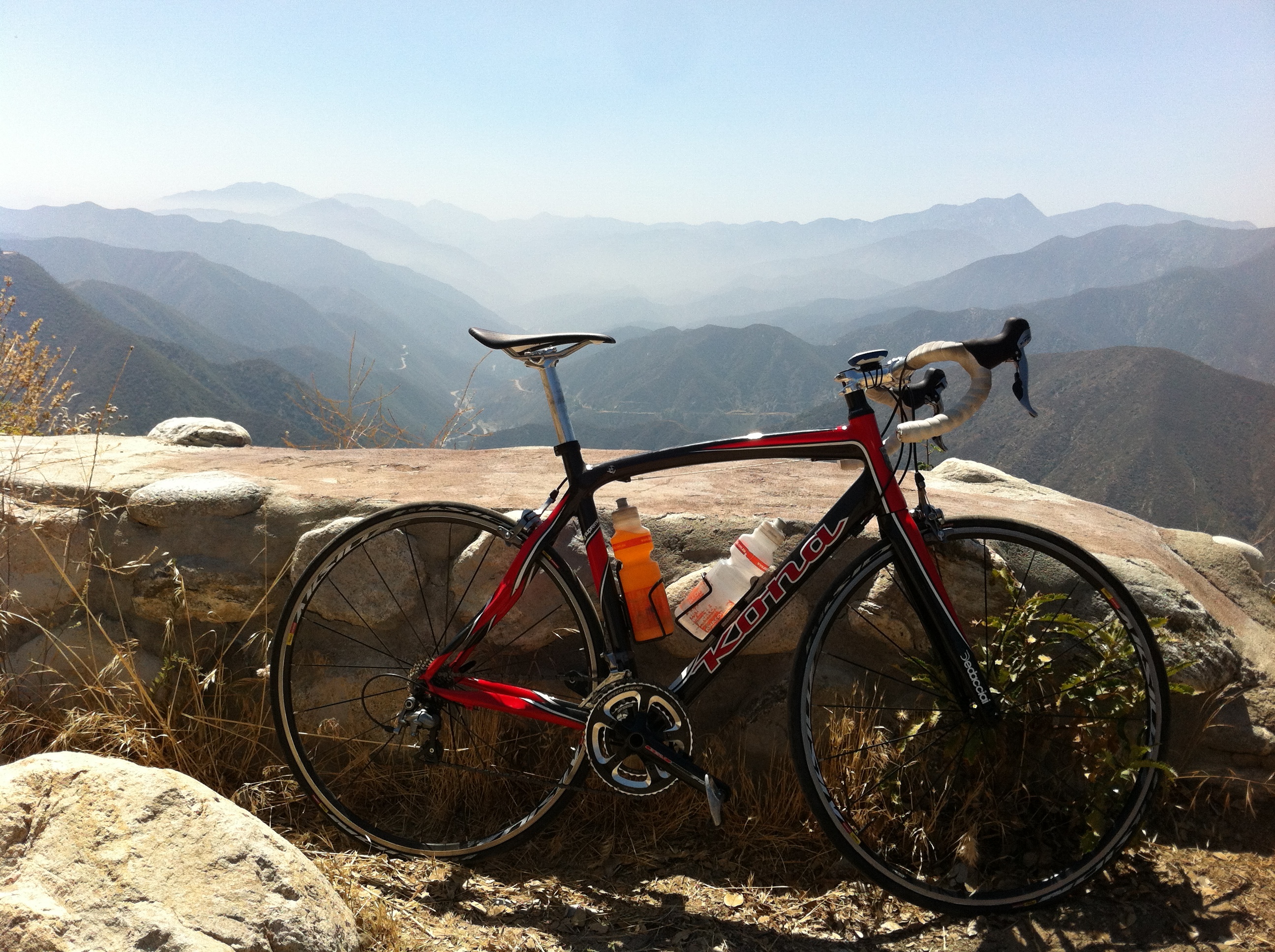 After getting my pedals and saddle back and getting changed, I jumped on the bus, then on the train back to LA. It was a long, painful and hot day and one that delivered mixed feelings. It was terrific to have conquered the mighty Mt. Baldy and to have had the privilege of riding along the amazing Glendora Ridge Road. It was less positive to struggle so comprehensively on the climb.

I’m not used to having to stop on a climb and usually when I’m at my absolute limit on a climb, it’s because I’ve put myself there in an attempt to go faster. I’m used to controlling the climb (so to speak), not the other way around. 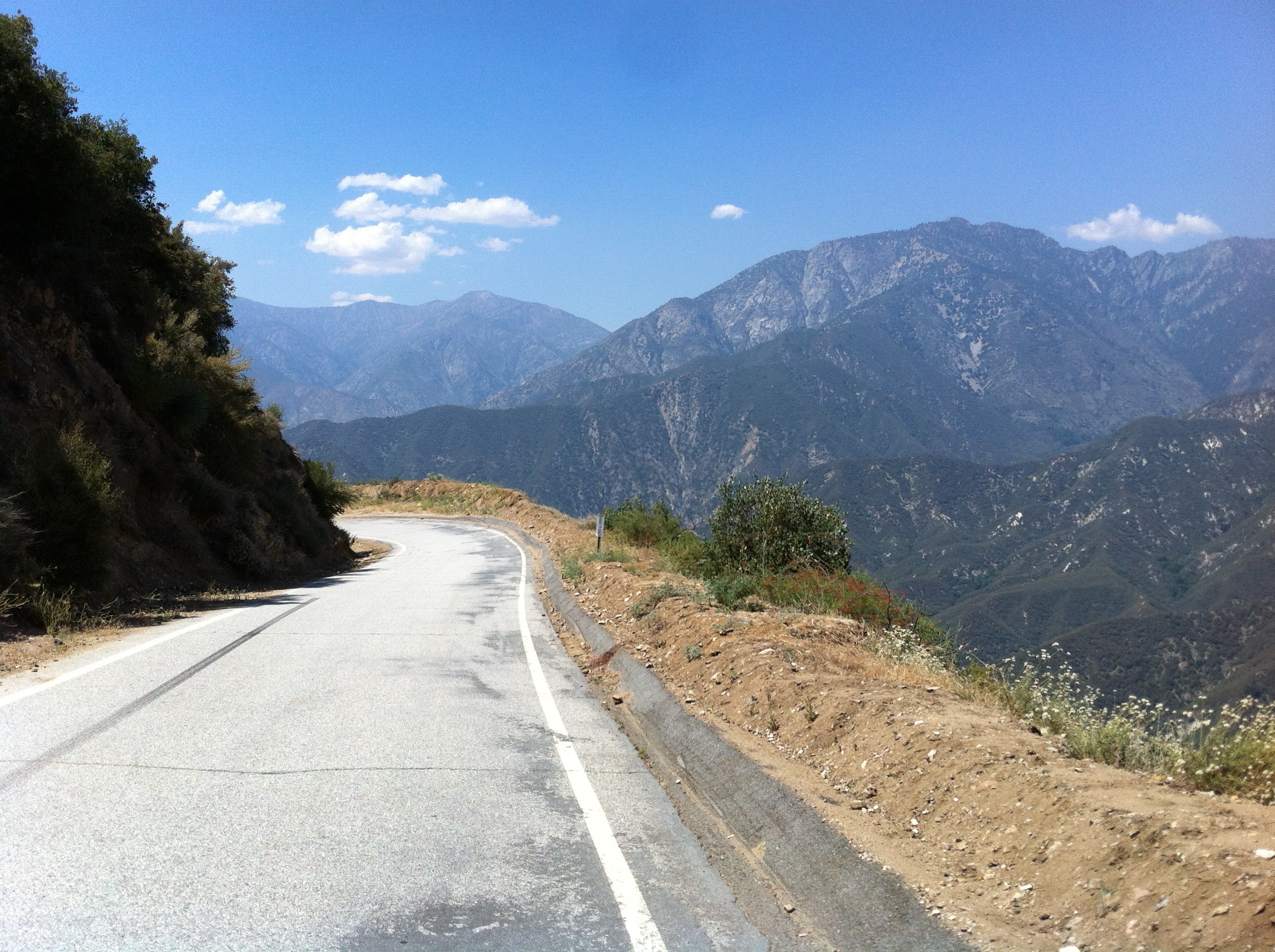 As I type this on my iPad I’m sitting in the communal area of a hostel in hot and sticky New Orleans. A thunderstorm is brewing outside and if the last few days are anything to go by, it will rain very heavily for about half an hour before the skies clear. I’m about a week and a half into my five-week US trip and hopefully there’s plenty more cycling to come.