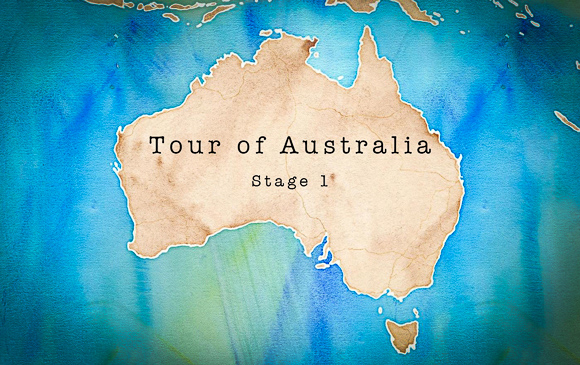 We’ve put together a course for a three-week race that takes in some of the best roads in the country in an attempt to create cycling’s fourth Grand Tour: the Tour of Australia. We’ll be revealing one stage per day in the lead-up to the Tour de France. This is stage 1.

Click here to see the route on RideWithGPS, including the KOM and sprint points.

Stage 1 of the Tour of Australia starts on North Terrace in central Adelaide, right near the University of Adelaide and University of South Australia. After clearing the neutral zone the riders head north east out of the city and out on to Gorge Road which runs alongside the River Torrens to Castambul.

At Castambul the route heads south onto Corkscrew Road and into the first categorised climb of the Tour, a 5km rise at 6% that includes the tough Corkscrew Road climb. This particular climb was featured in the 2013 Tour Down Under.

After descending through Ashton the peloton will head east and up the fourth category Basket Range climb before heading south east through Nairne out towards Murray Bridge. It’s on the main road through Murray Bridge that the first intermediate sprint for the Tour will be contested, 104km into the stage. From Murray Bridge the route swings south east towards Tailem Bend (home to the Big Olive) before heading south past Lake Alexandrina and Lake Albert all the way to Meningie.

With some climbing to contend with on the way out of Adelaide the pure sprinters might find themselves falling off the back early in the stage. The early KOM points on Corkscrew Road and the Basket Range climb could lure the KOM jersey contenders into an early-Tour breakaway but given the last 80km of the stage are almost entirely flat, there’s plenty of time for the sprinters’ teams to get organised. All things considered, this stage is likely to finish in a bunch sprint.

Stay posted for stage 2 of the Tour of Australia, coming tomorrow.