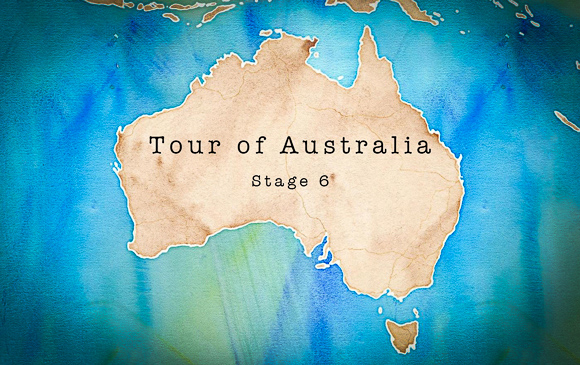 We’ve put together a course for a three-week race that takes in some of the best roads in the country in an attempt to create cycling’s fourth Grand Tour: the Tour of Australia. We’re in the process of revealing one stage per day in the lead-up to the Tour de France. This is stage 6. Enjoy!

On stage 6 of the Tour of Australia the riders embark on a clockwise arc around Melbourne, starting in Lara and ending up in Yarra Glen. Along the way they’ll take in two challenging climbs before enjoying a downhill run into the finish.

Leaving Lara the riders head north, passing to the west of the picturesque granite ridges of the You Yangs before pushing through to an intermediate sprint point in Bacchus Marsh after 45km of racing.

From Bacchus Marsh there’s a 20km uphill drag towards Gisborne which shouldn’t be steep enough to split the field too much. The steep climb on the other side of Gisborne, the 1st category Mt. Macedon climb, is another matter entirely. The climb is only 5.5km long but with an average gradient of 8.2% and with much of the climb spent at above 10% it’s sure to wreak havoc on a large portion of the field.

After descending the far side of Mt. Macedon the riders head east through Wallan before turning south towards the Whittlesea intermediate sprint point after 155km of racing. From Whittlesea it’s out through Arthurs Creek, where Cadel Evans’ mum lives, out through St. Andrews and up the 2nd category Kinglake climb. It’s normally a reasonably easy climb to get up and over but with nearly 190km in the legs and with the end of the stage fast approaching the pace will well and truly be on.

From Kinglake it’s down and out to the Melba Highway then downhill all the way to Yarra Glen before the shortest of rises just before the finish line.

This is the sort of stage you might expect a breakaway to gain some serious time and possibly even take out the stage. It’s certainly not suited to the sprinters — so their teams are unlikely to do the work to close down the break — and with several tough mountain stages to come the GC contenders might be happy to let the lower -placed riders battle it out.

Stay posted for stage 7 of the Tour of Australia, coming tomorrow.

7 Replies to “Tour of Australia: stage 6”