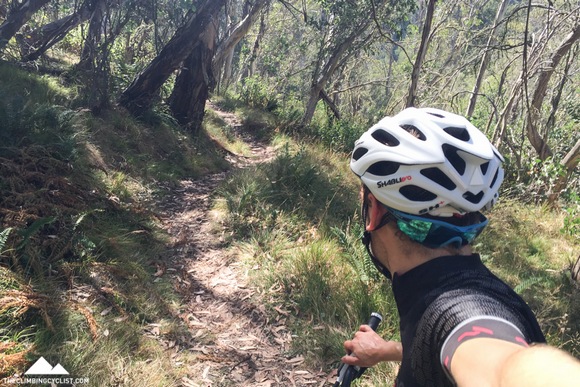 I don’t have a great track record when it comes to mountain biking. I seem to crash at least once each time I hit the trails and I broke ribs in each of my last two outings. So when I set off from the Mt. Buller village last Sunday, alone, heading for some challenging trails, I did so with more than a little trepidation. The fact I was ill-prepared only made things worse.

When I left Melbourne a couple days earlier, I’d packed everything I needed for the road ride I was doing — the Domestique 7 Peaks ride from Mirimbah to the resort. What I hadn’t done was consider the extra kit I’d need for mountain biking the following day. Sure, I’d packed the ol’ MTB (actually my brother Brendan’s old bike, as featured here). What I hadn’t brought was gloves, a spare tube, an appropriate hand pump, more than one bidon and MTB-appropriate shoes.

A quick stop at the bike shop atop Mt. Buller left me feeling a little more prepared but no less nervous. Still, it didn’t make sense to come to Buller for a weekend and not get out on some of the country’s best trails, did it?! 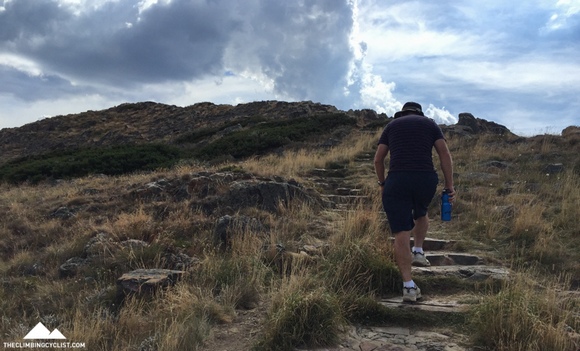 The day before hitting the trails I climbed to the summit of Mt. Buller with my dad. A summit visit is a must-do when at Buller.

It took all of about 30 seconds on the first proper trail (Gang Gangs) for me to remember that mountain biking and road biking, while linked by the presence of a two-wheeled vehicle, are totally different disciplines. It’s simply not enough to be physically strong as a mountain biker — you need to have the technical abilities to match. I certainly didn’t.

I crawled along the quiet trail, cursing my lack of confidence, all while trying to dispel visions of a nasty crash and not being found for hours afterwards.

But slowly, surely, my confidence grew, and I started to find something resembling a rhythm. Following the Australian Alpine Epic Trail I took Cornhill and then descended the steep, muddy 4WD track known as Woolybutt. By the time I reached Howqua Gap I had ventured considerably further east of the Mt. Buller village than in my previous outing and I was starting to enjoy myself. And then things got hard. 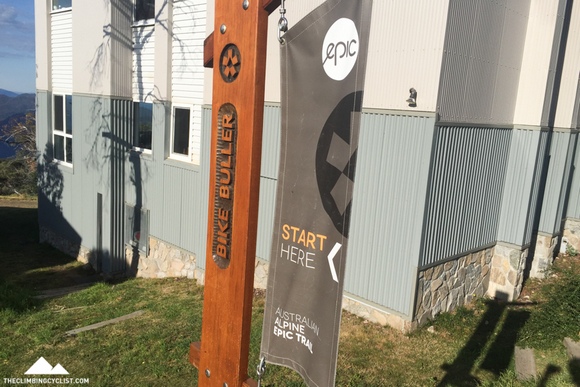 Starting off the day in Buller, heading along the Epic trail.

Going into the ride, I was most concerned about the Stonefly descent. With the trail’s advanced difficulty rating and my decidedly un-advanced descending technique, it would be a challenge to get down in one piece. The climb, in my mind, would be easy enough. My road bike fitness would allow me to get up the steep grades without hassle, I thought, as I set off from Howqua Gap. But it wasn’t the gradient or the length of the climb that proved challenging.

At no point was my lack of technical ability more obvious than on the Stonefly climb’s many switchbacks. Almost without fail I’d reach a steep hairpin, take a look at what lay ahead of me and then panic unclip my road shoes from my road pedals. The steep grade, the low speed, the often-rutted out exit line … I didn’t have the confidence to push through it. Cursing my lack of confidence, again, and my lack of ability, I’d walk for a few metres until the path levelled off, clip back in and then try to steel myself for the next corner. 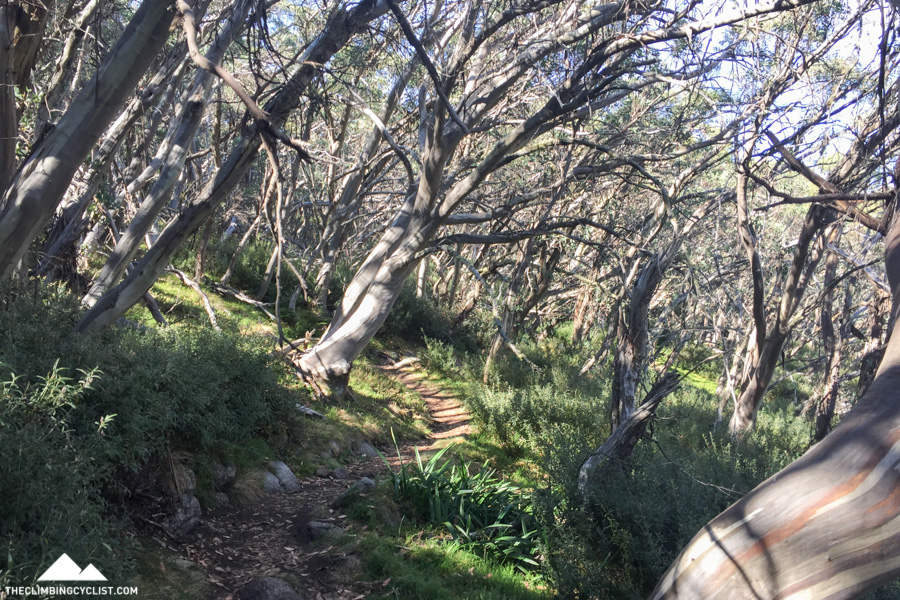 With 6.1km at 4% and many steep pinches of well above 10%, the climb itself wasn’t easy either. But I relished those brief moments when the challenge was simply an aerobic one rather than a technical one. It was in these moments that I felt as if I was on equal footing with this black diamond challenge, rather than being defeated by it.

But despite the frequent unclipping and re-clipping, and the even-more-frequent cursing, I eventually reached the Bluff Spur Memorial Hut and the top of the Stonefly trail. The views from that junction were spectacular, as they had been a few moments earlier when I rounded a corner after a particularly challenging section.

After battling through the climb, the vista laid out before me made it all worthwhile.

I’d set out that morning with the intention of reaching the Mt. Stirling summit and so at Bluff Spur Memorial Hut I deviated from the Stonefly trail briefly — postponing the descent — and found my way to the summit. I’d been told it was a tough 700m stretch to the peak and those warnings hadn’t been wrong.

Even with a super-generous granny gear on the bike I was riding, the 4WD track to the summit proved too steep, too rough and too loose to ride with any consistency.

I found myself walking much of the way to the summit, the heat taking its toll now that I was out of the tree cover. But as ever, the reward was worth the effort. Spread before me were magnificent 360-degree views of the surrounding Alps, not least a clear look at the Mt. Buller resort. It was barely 10km away in a straight line, but I’d put in a lot to get there. 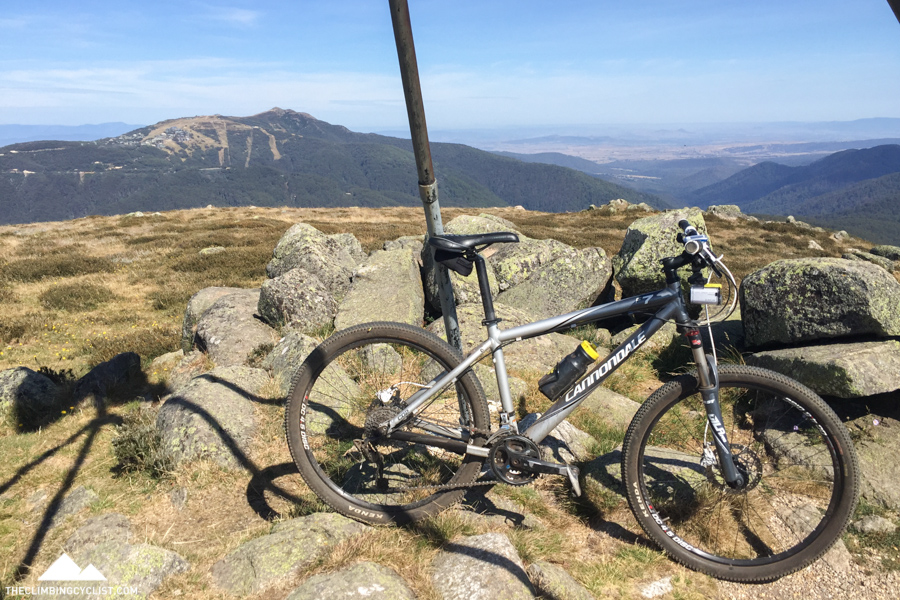 The view from the top of Mt. Stirling with Mt. Buller in the background.

I carefully made my way back down to Stonefly, feeling somewhat nervous but excited about the impending descent. It started off in reasonably challenging fashion and then, about halfway down, things changed. Gone were the tough, technical rocky sections and in its place were smooth, flowing corners that barely required a touch of the brakes.

By this stage I was starting to pay the price for forgetting my gloves. Big blisters had started to form in several spots on each hand and braking was becoming increasingly painful. But for a few blissful minutes, the pain faded away and I got lost in the moment. It was such a relief to be able to enjoy the trail; to not be hampered by a lack of skill and to be able to enjoy the trails as designed. 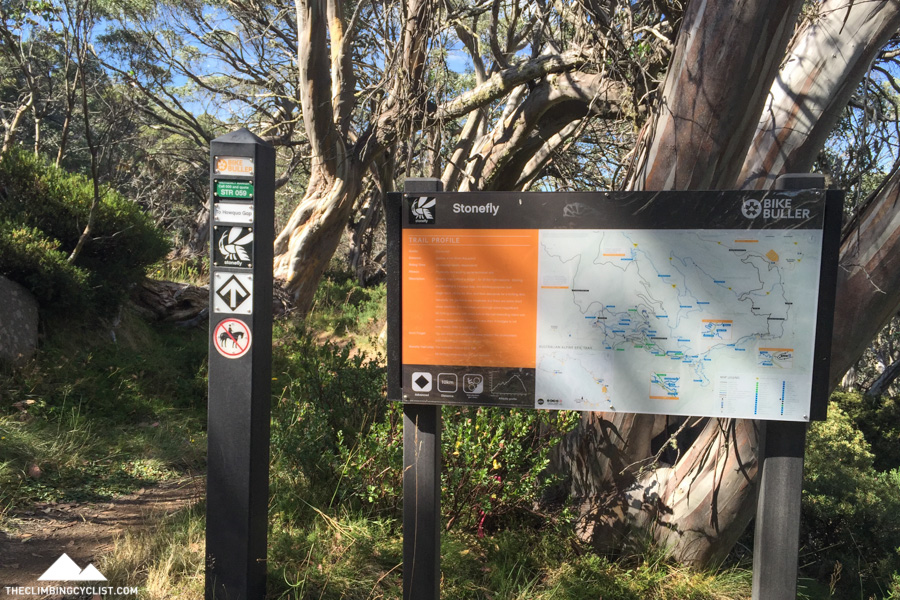 The start of the Stonefly descent. Black diamond-y goodness ahead.

When I set off from Mt. Buller earlier in the day I knew that taking just one, 750ml bidon of water was going to be somewhat ambitious. I’d hoped for somewhere to fill up along the way but with “Not drinking water” signs in the likely locations, it became a case of conserving what little water I had left.

Back at the Howqua Gap, with five trails still between me and Mt. Buller, I had less than a quarter of a bidon left. I knew roughly how far I had to ride, but distances on the trails can be misleading, particularly when you don’t know how much climbing is ahead of you.

The Trigger Happy and Medusa trails served up a most unwelcome banquet of steep, tight, uphill switchbacks and again I was reduced to walking on several occasions. At times it proved quicker and better for the morale to walk a section of multiple switchbacks rather than clipping out, walking and then clipping back in again, only to fluff the next attempt at cornering and be back to square one. 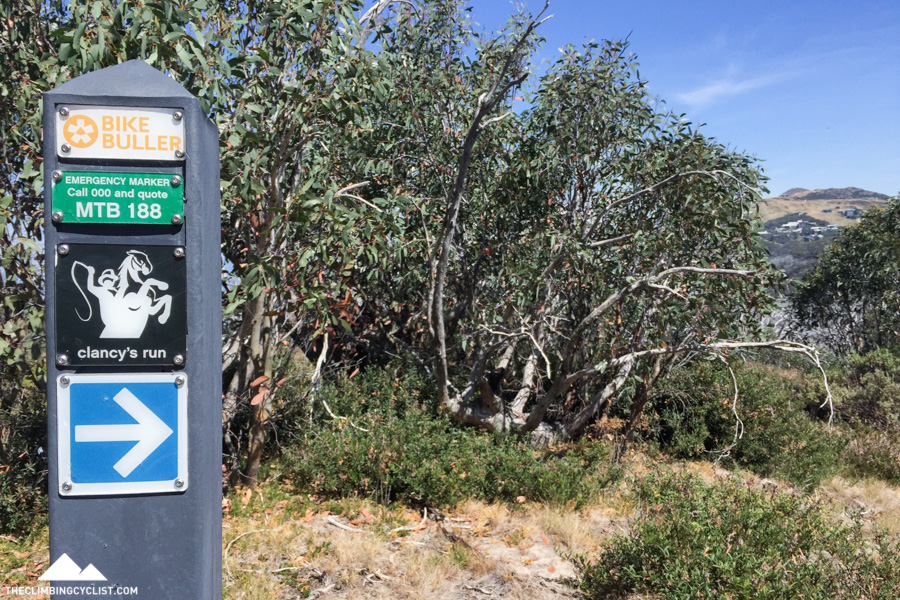 The downhill Clancy’s Run provided a much-needed morale boost late in the ride.

At the top of the Medusa trail, Clancy’s Run provided a much-appreciated downhill jaunt before Wombat provided one of the easiest sections of the whole day. When Split Rock started off in an equally friendly manner I was feeling good — dehydrated, but good — but then the path turned skyward and again I was off the bike, walking, baking in the late-morning sun.

When I reached the top of that trail and could see the Mt. Buller village just kilometres away, it was hard to suppress the feeling of relief. I’d had a terrific time, but I was done. And more importantly, I needed something to drink. 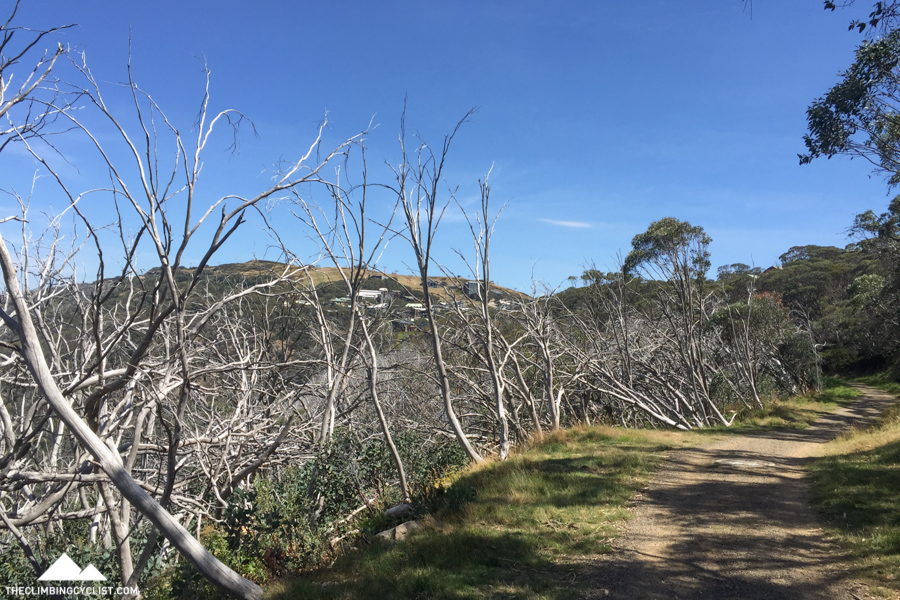 Just a kilometre or two away from the Mt. Buller village.

Strava tells me that I covered just 25km in those 2 hours and 40 minutes of riding at an average speed of less than 10km/h. It’s an inglorious statistic but one that reminds me, yet again, just how different mountain biking and road biking are.

I’d been apprehensive about heading out on the trails alone, worried about crashing and not having someone around to help if I did. But in the end it was probably a good thing I didn’t have company. It meant there wasn’t anyone to slow down, and I could ride at my own pace, as pedestrian as that was (literally, at times).

Still, my confidence improved throughout the day and the only crashes I had were two embarrassing tumbles while climbing at 5km/h. Both were due to a failure to unclip fast enough and both while attempting a tight hairpin bend. I’ll take those sorts of crashes over downhill, face-planting, rib-breaking falls any day.

Great views from the summit of Mt. Buller.

As challenging as it can be, I recommend that roadies get out on the trails every so often. It’s a sure-fire way to improve your bike handling and other technical abilities, rather than simply relying on your fitness and aerobic capacity. It also forces you do a different type of climbing — short, sharp, punchy climbs, rather than the longer, more consistent climbs you tend to find on the road.

Above all, mountain biking is a whole heap of fun. Sure, it will make you feel more than a little silly when you’re as poor at it as I am, but there’s no denying how satisfying it can be when you nail a tough section or climb to the top of a nearby mountain.

I can’t wait to get back out on the trails.

Click through to see my Strava file from the ride and be sure to check out the video from my ride, below. 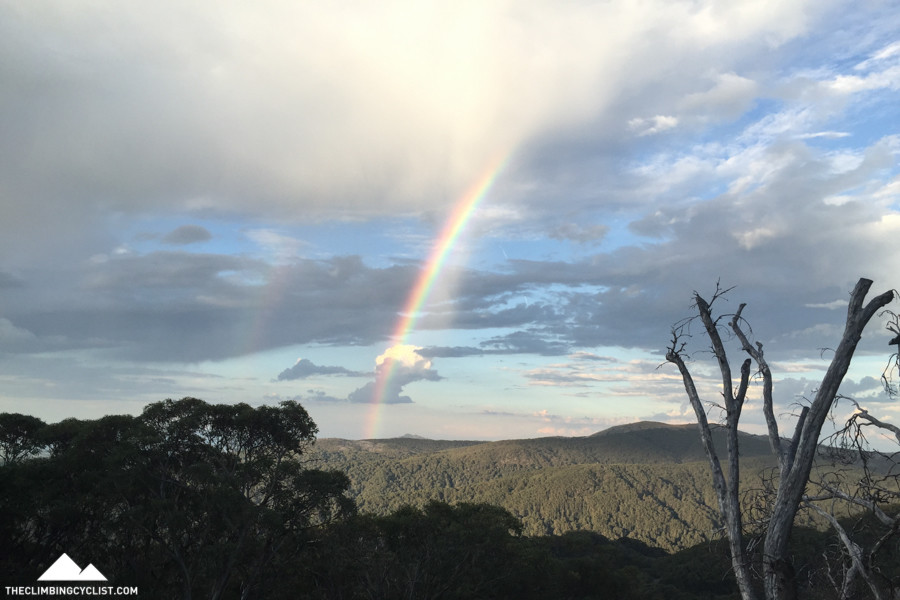 Taken the night before I hit the trails. 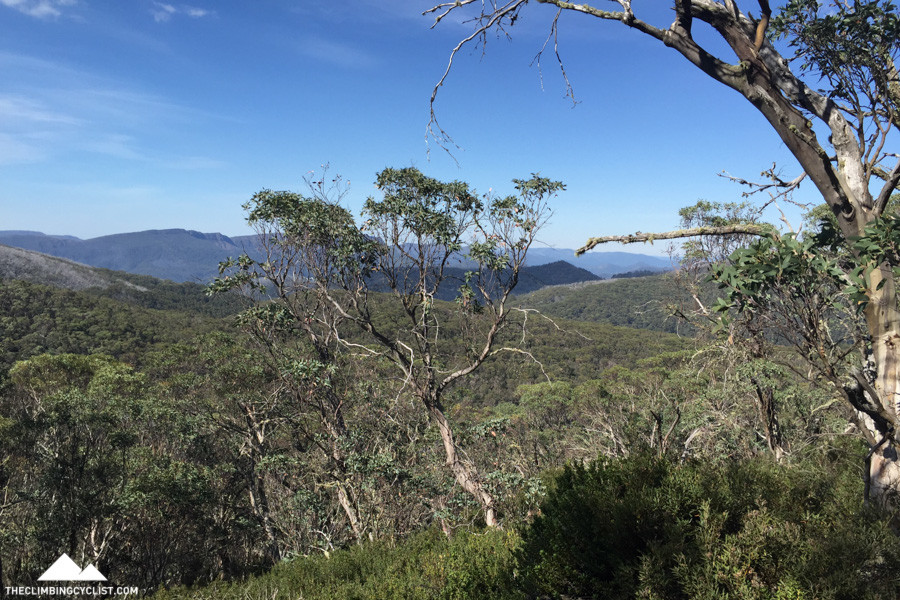 Terrific views from near the top of Stonefly. 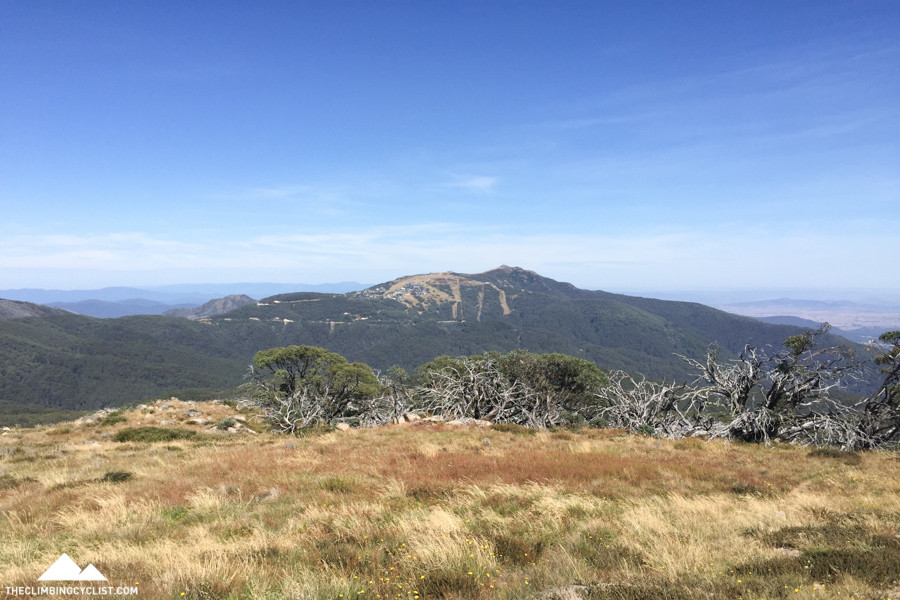 The view from Mt. Stirling, looking toward Mt. Buller. 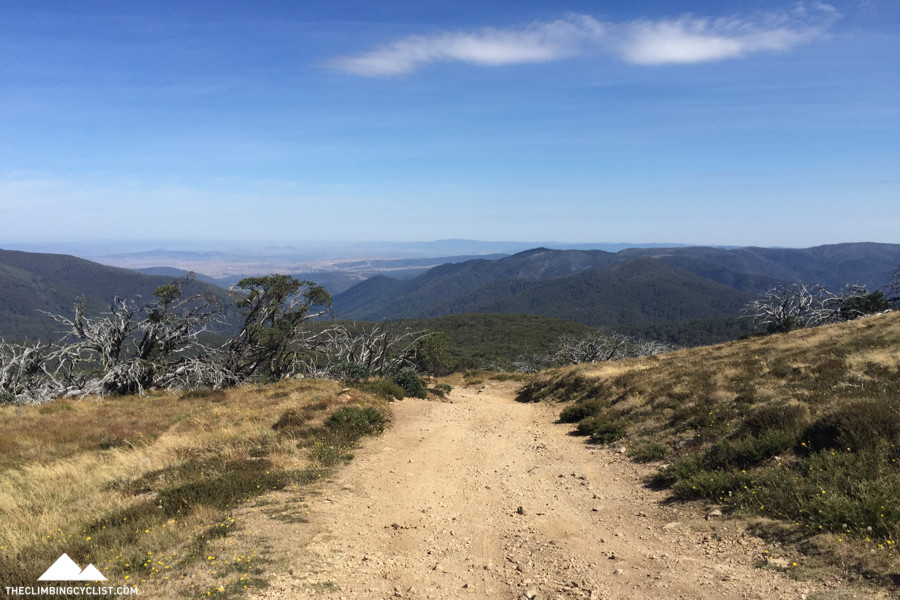 Descending the rough 4WD track from the summit of Mt. Stirling. 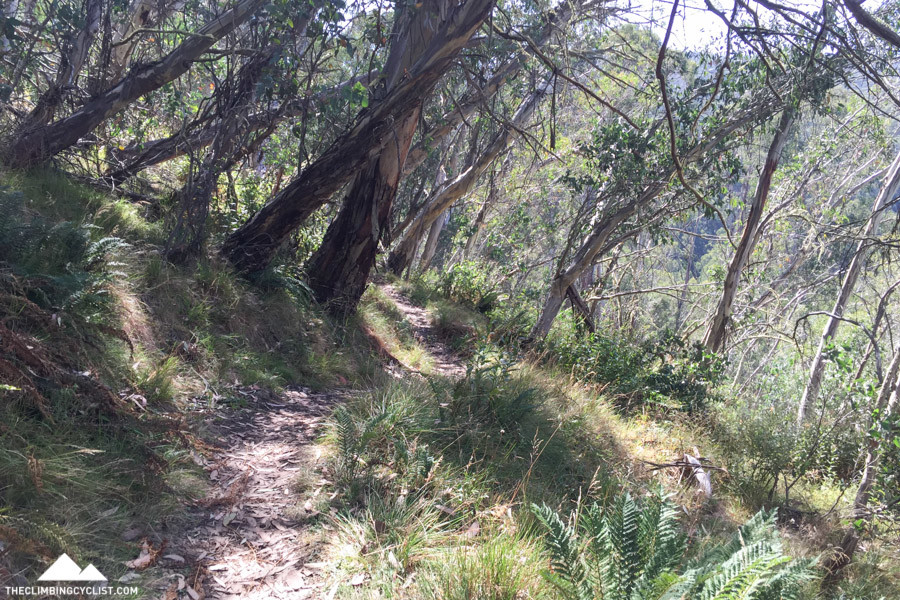 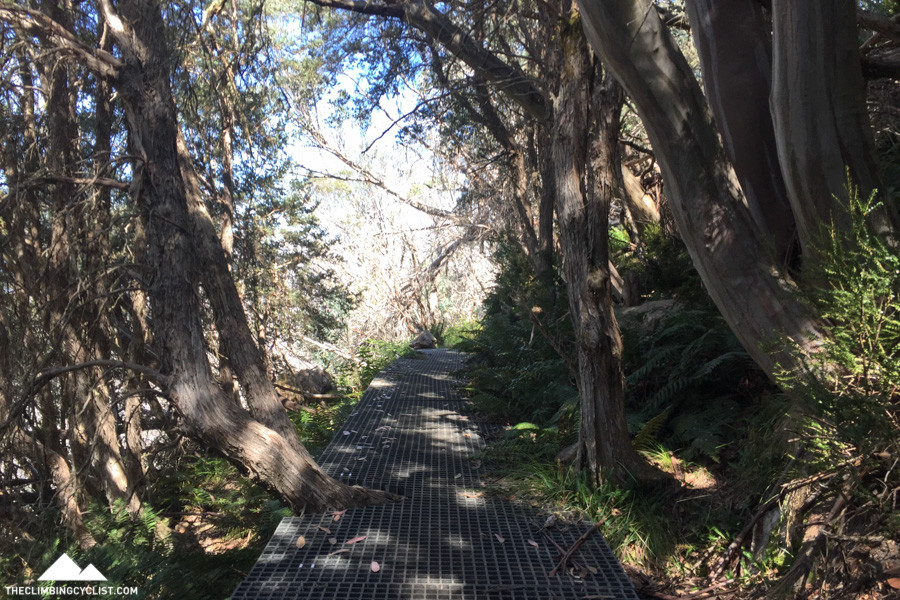 A nice section of the Split Rock trail, just before getting back to Buller.