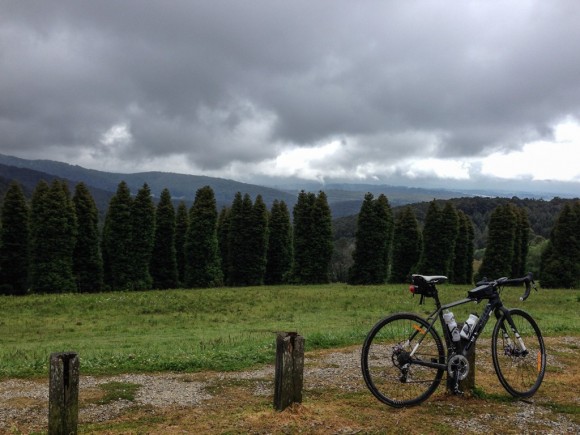 There’s little doubt that the Dandenongs are among the most popular areas around Melbourne for road cycling. And with good reason — there are more than enough good climbs, of different lengths and gradients, to keep you busy for a whole day. And then some.

But even the most frequent visitors to the Dandenongs tend to stick to the routes they’re most familiar with. The 1 in 20. The Wall. The Devils Elbows. Terrys Avenue if they’re feeling adventurous (and a little masochistic). Few people realise there are a whole host of other exciting roads to check out, just off the beaten track.

This was the guiding principle behind the Domestique Dirty Dandys ride, held a couple weekends ago. 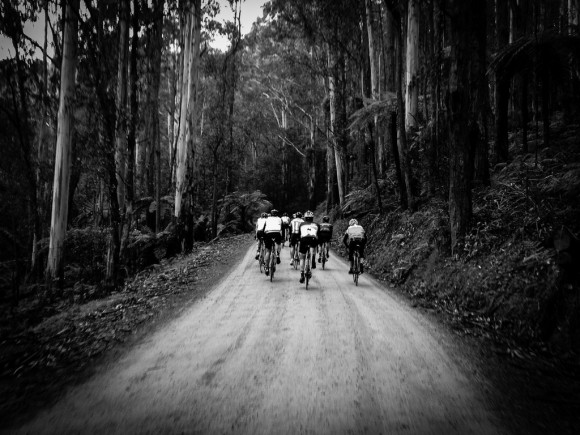 For those that came in late, Domestique is the name we’ve given to the collaboration between Hells 500 (run by Andy van Bergen) and The Climbing Cyclist. Under the Domestique banner we run our 7 Peaks series and this season, for the first time, a handful of smaller rides that are designed to introduce riders to new roads, and to each other.

The inspiration for the course came from a ride done a few months back by a bloke by the name of Brendan Edwards. He spent the best part of a day riding some of the unsealed roads in the Dandenongs and it was a concept we were keen to try out. So using some of the roads Brendan had ridden we put together a 70km-long course that took in six climbs. A large percentage of the ride would be done on unsealed roads (hence ‘Dirty’ Dandys), entries were capped at 30 riders and it was free to come along.

We met just before 9am at The Basin and after a quick pre-ride chat we headed for the first climb of the day: Basin-Olinda Road (6km at 5.8%). There’d been a little bit of rain the day before the ride so this particular climb (virtually all of it unsealed) was quite wet and squidgy in places. There were a couple of corners that were slippery enough that you could lose traction briefly (even while climbing) but it seemed like everyone had taken our advice and fitted thicker or grippier tyres, and as far as I’m aware no-one came off.

Given this was my first challenging ride in nearly three months I was apprehensive about how I’d go on the climbs. I was keen to take things pretty easy which meant, due to a lack of fitness and the few extra kilos I’ve added recently, I found myself slipping off the back of the main group on any climb of note. But it didn’t matter. We all regrouped at the top of each climb, before heading to the next section.

From the top of Basin-Olinda Road we headed through Olinda then out to Falls Road — the second unsealed sector of the day. The first half of Falls Road saw us descending for roughly 2km before we started climbing, on dirt and then on asphalt, towards Ridge Road. This reasonably steep 1.8km long climb had me dropping off the back once more, but I was more concerned about finding a rhythm and conserving my energy for the tougher climbs to come. Two down, four to go.

From the intersection of Falls Road and Ridge Road we descended the latter towards ‘Five Ways’ before taking the Mt. Dandenong Tourist Road through Kalorama to Olinda Creek Road. This is one of those roads that I always ride past while on the Tourist Road and think ‘I should see where that goes’ but I never do. 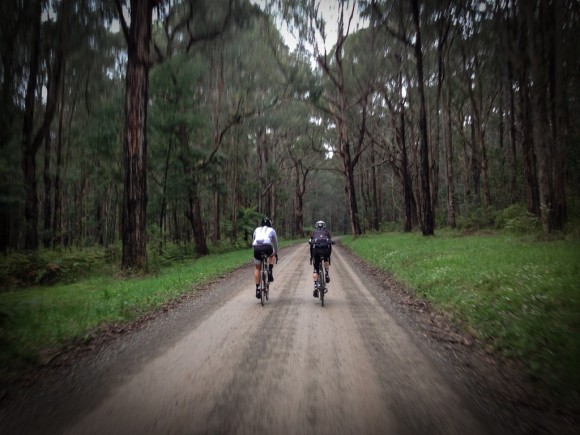 Descending on the dirt for a few kilometres we joined up with Silvan Road where we took a right. From there we started climb three which was roughly 5km long with an average gradient of close to 6%. The climb wasn’t particularly challenging  (though I did fall off the back again) but the rocky road surface made it feel harder than it might have been. I made a mental note of the surface — we would descend the same stretch of road a little later.

The Silvan Road climb ends at the RJ Hamer Forest Arboretum. It’s funny to think that this arboretum is so close to The Wall climb that I’ve done so often, and yet I’ve never visited the arboretum. If you’re in the vicinity at any point, swing over and take a look at the views. As you can see from the feature image, they’re well worth a look. 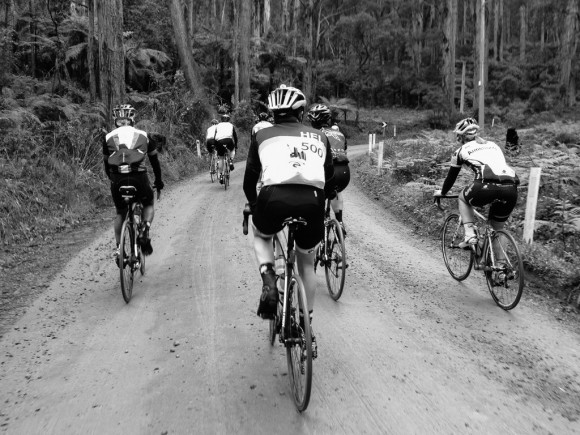 With three climbs in the bag it was time to descend Perrins Creek Road and head up another unsealed climb: Upper Coonara Road. For me this was probably the easiest climb of the day. Strava suggests that the main unsealed section is 1.1km long at 8% and even with a short rise before that, and a few kilometre of The Wall after it, I felt fine. I still couldn’t comfortably stay with the main group, but my legs were starting to feel good. Four climbs in the bag, just two to go.

Those last two were the hardest of the day.

From the upper slopes of The Wall we headed down past the RJ Hamer Arboretum again and retraced our steps down Silvan Road. In designing the course I was slightly worried that re-riding some sections would make that part of the ride feel like a bit of a grind. I don’t know about the others, but it didn’t seem like that to me on the day. Perhaps because the descent of Silvan Road was such a memorable part of the day.

As mentioned, the surface was quite rough with lots of rocks, stones and corrugations on the descent. A few riders got unlucky with punctures on the way down but I had no such ill fortune and thoroughly enjoyed the descent. We got to the intersection of Silvan Road and Olinda Creek Road with our hands numb from the rattling and several people joking about having lost fillings on the way down. But it was good fun and a highlight of the ride for me. I’m sure others might disagree!

We followed Olinda Creek Road back the way we came but instead of retracing our steps completely, we took a left onto Barbers Road which we followed all the way back to Five Ways.

Strava has Barbers Road as 1.7km at 11.5%, most of that unsealed. This was probably the climb that surprised me the most on the day. I knew it was going to be steep, but I wasn’t prepared for how relentless the climb is. I’ll definitely be heading back to Barbers to give it another shot once I’m in better form.

We all regrouped at Five Ways, including the riders that had flatted on the Silvan Road descent and those that had waited back for them. From there it was down the Mt. Dandenong Tourist Road towards Montrose for the final climb of the day: Old Coach Road.

This was the climb I was most apprehensive about. I’d driven it a few weeks earlier in reconnaissance and noted that the unsealed part of the climb (probably half of it) was quite steep. It certainly felt steep on the day, but it was manageable. I just tried to find a slow rhythm as we worked our way up the 2.3km-long rise which averages about 11%. There were some great views off to the left in the final stretches of the climb and I’ll certainly be back to take another look at a later date.

Old Coach Road comes out at Five Ways and from there we just had the steep grind up Ridge Road to Sky High to complete the final ascent of the day. I struggled like anything on the steep sections, well off the pace set by the quicker riders, and even thought about stopping briefly on one particularly nasty pinch. But I found a way to get through it and joined the rest of the crew at Sky High for a spot of well-earned lunch.

After grabbing something to eat and drink and having a chat we started making our way back to The Basin. We’d given people the option of taking the Tourist Road to Sassafras and then the 1 in 20 to The Basin if they were short of time, but all bar two of the riders followed Andy and I down the Tourist Road toward Montrose again, before taking the lumpy but enjoyable Sheffield Road towards The Basin. 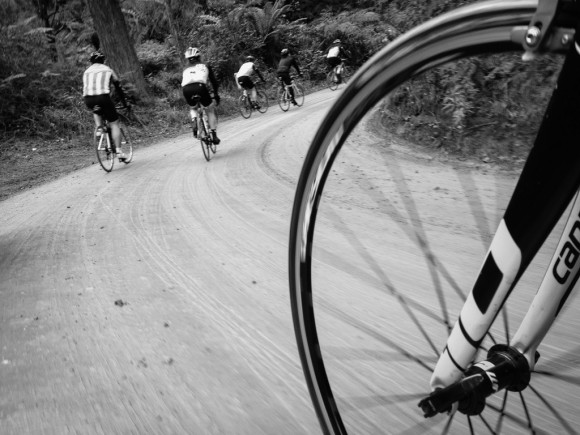 There are a few steep pinches along Sheffield Road (including a short unsealed climb that hits 11%) but the most memorable part was the super-fast descent off one of those steep pinches. If you’re ever looking for an alternate route back to The Basin from Sky High (or anywhere in the Dandenongs really) be sure to check out Sheffield Road. Very enjoyable.

Back at the car it was time to say our goodbyes and head out separate ways. It had been a challenging ride with some very testing climbs but everyone handled themselves really well and, hopefully, found some new favourite roads in the Dandenongs. 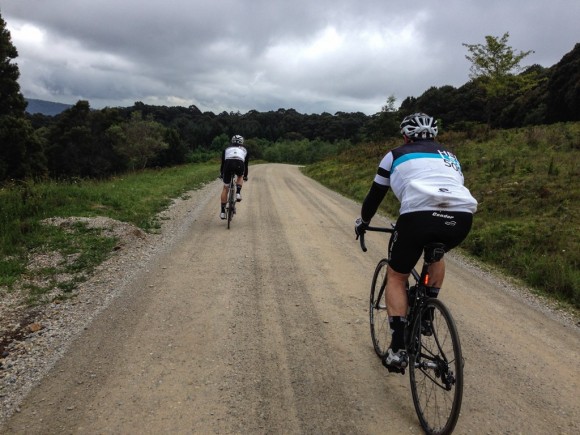 For me, the ride was a real challenge to see how my body would react to some tough climbing after a long period without much riding at all. As I’ve said, I spent most if not all of the climbs well off the back, but I was happy with how I paced myself. I was completely ruined that night and headed to bed early, but the next morning I felt great. I certainly hadn’t gone backwards like I did after virtually every ride in the past few months.

Thanks to all the riders that came along on the day — I hope you enjoyed the experience as much as I did. To those of you that couldn’t make it but are interested in trying out the route, here’s the info you’ll need. I might be a little biased, but I think the route worked out reasonably well. 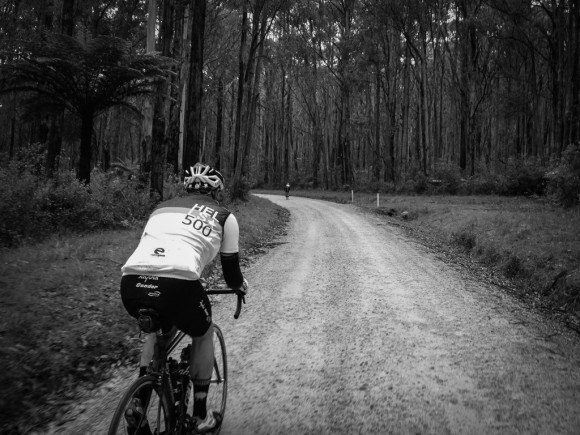 If you haven’t already signed up to join us for the Domestique 7 Peaks Series, you can do so here. We’re organising a ride for each of the 7 Peaks and if last year’s series is anything to go by, it should be an enjoyable and rewarding group of rides.

And stay posted too for further Domestique rides. We love the idea of getting a bunch of riders together, showing them some new and exciting roads, and hopefully creating friendships along the way.

Thanks very much for reading and we hope to see you out for a ride soon! 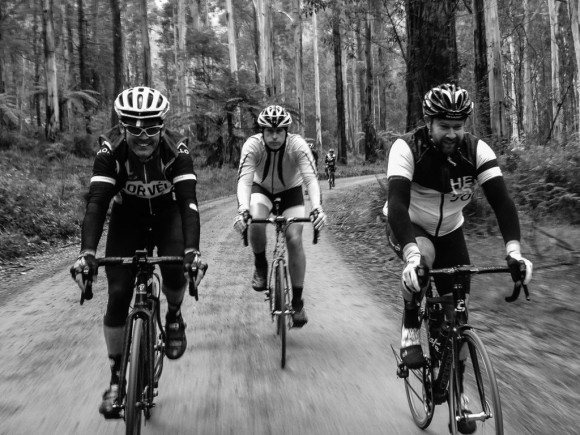 Click here to check out Andy’s Strava file from the ride. My Strava file got corrupted somewhere along the way.