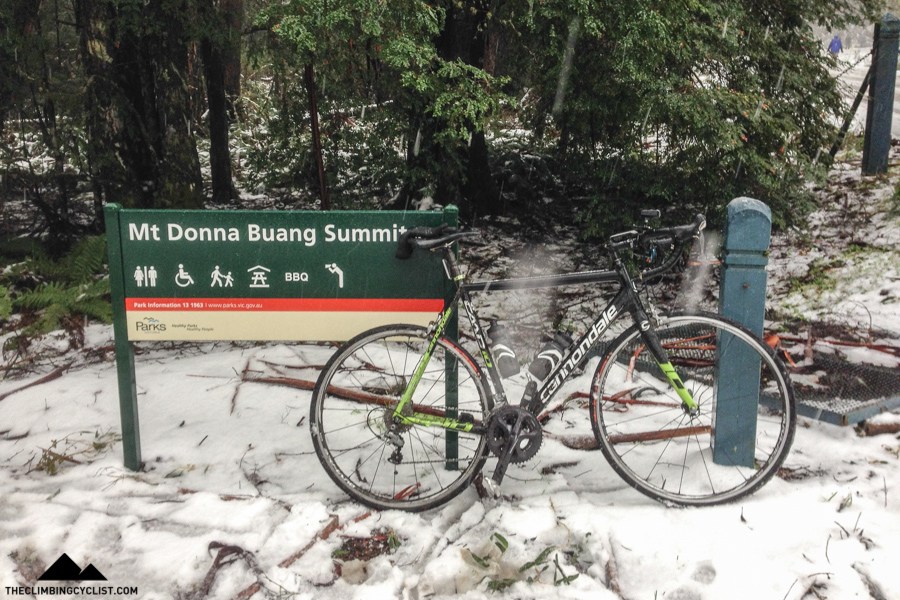 Every year for the past five years I’ve ridden to the top of Mt. Donna Buang in winter with the hope of seeing snow. Sometimes I’ve been lucky enough to see a bit of snow up there, and other times I’ve only seen rain and mud. But last weekend’s ride up Donna was something completely different.

A group of about 10 of us headed out to Warburton early on Sunday morning to do a reconnaisance ride for “Ol’ Dirty”, the ride formerly known as Donna Done Dirty. The day began with a very challenging, largely unsealed climb out of Warburton to the O’Shannassy Aqueduct Track which we followed west towards Don Road.

The Aqueduct Track is simply stunning. Winding its way along the lower slopes of Mt. Donna Buang it proved to be a great alternative to the Warburton Highway and even to the Lilydale-Warburton Rail Trail which is a pleasant enough bit of track.

At Don Road we turned right to begin the day’s climb. It’s largely uphill from that point to the top of Mt. Donna Buang — about 20km of climbing at just under 5%. The group started to fracture slightly on Don Road and I found myself drifting backwards unable to stay with the frontrunners.

Once we got to Panton Gap, the top of Don Road, we turned right and continued climbing on Donna Buang Road. On the other side of the gate — the road is closed to cars during winter — we got a glimpse of what happens when a mountain road doesn’t see car traffic for weeks on end. Leaf litter and branches covered the road and between the two gates — roughly 13km I’d guess — we must have passed a dozen fallen trees. Some we could ride around; most we needed to clamber over or under.

If you haven’t ridden the back way up Mt. Donna Buang before I highly recommend you do. It’s unsealed for a big chunk of the climb but it’s completely doable on a road bike. I was using 25mm Challenge Strada tyres and they felt great. I know many riders that have ridden that road in 23mm slicks, even in winter.

It had started raining while we were climbing Don Road and I don’t think it really stopped beyond that point. It’s funny how wet and muddy conditions would normally be less than enjoyable on a road bike, but on that bit of road, in the context of the ride we were doing, it only served to heighten the experience. The sound of rain falling on ferns while lyrebirds call out through the forest — just magic.

Given it was just 3°C and raining at Panton Gap, 540m above sea level, it seemed likely that there’d be some snow falling at the summit, roughly 700m higher. The first signs we saw of snow were patches of it here and there on the roadside, while the rain was still falling. And then, a couple of kilometres from the summit, the road (sealed at this point) was covered in a thin layer of ice and slush.

By the time we got to the intersection with the main Donna Buang road, 1.5km from the summit, it was properly snowing. At this point I was just about soaked through and bitterly cold — it was 0°C — but I was over the moon. After five years of trying to get snowed on during a ride up Mt. Donna Buang it had finally happened. And yes, I know how crazy that sounds.

A few riders decided wisely to skip the final climb to the summit, but I was keen to finish the job and see what it was like up there. The snow was falling reasonably heavily as I climbed the final 1,500m and it was a novel but exhilarating experience having to wipe snow out of my eyes.

The Garmin was reading roughly -2°C at the summit and I could feel myself starting to get dangerously cold. After taking a few quick photos and videos — pulling off my gloves at the top wasn’t a whole lot of fun — I wrapped a scarf around my face and began a very challenging descent.

You know it’s cold when you look down to see your Garmin reading 0°C and think to yourself, quite genuinely, “oh good, it’s warming up!”. I’d brought spare gloves with me but they’d gotten soaked in the near constant rain and so I was left to descend in soggy, cold gloves. 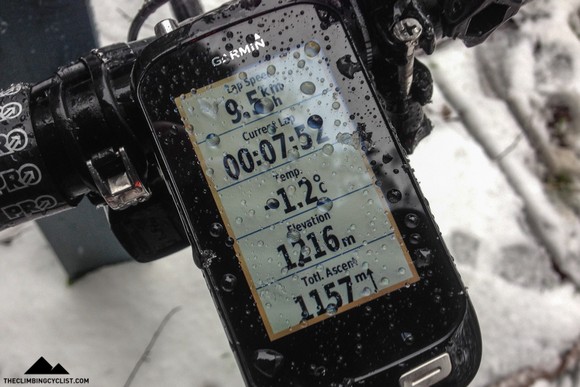 Despite having done half a dozen winter rides up and down Mt. Donna Buang in recent years I still don’t reckon I’ve worked out the perfect clothing solution. A scarf or some other way to cover your face is essential, as are warm, dry gloves. On Sunday I had two pairs of socks and two sets of shoe covers on and my feet were still cold.

Apart from the cold — which became bearable after Cement Creek halfway down — I actually quite enjoyed the descent. Even though there was slushy ice on the upper slopes and water the rest of the way down, I felt confident descending. That seems strange to me given I couldn’t clip both feet in properly until about 10km down the hill, thanks to ice in my cleats.

I got to the bottom shaking like a leaf and feeling colder than I would have liked. I turned the heater on full blast in the car and half an hour later I was still cold. It didn’t feel quite as bad as that horrendous day down in Hobart a couple years back, but it certainly wasn’t pleasant. 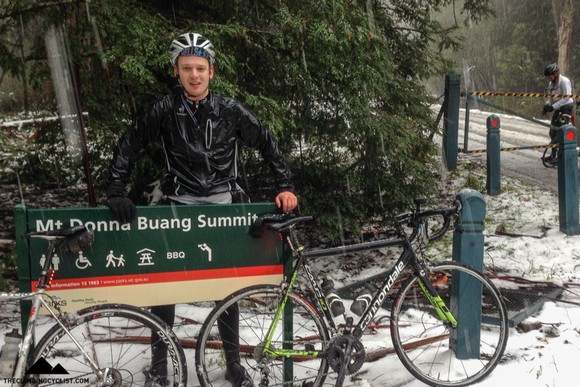 If you’ve spent much time on Instagram in recent years you would likely have seen the hashtag #notbeachroad. For me, this ride was the epitome of that concept — the ride wasn’t about expensive bikes, pristine kits, rolling turns or even coffee stops. It was just about the adventure and experience of riding in terrain and in conditions that, to be honest, most sane people wouldn’t want to.

And therein lies part of the appeal I think — it’s the sort of ride that shouldn’t really be possible, if you apply even a modicum of common sense, and yet it’s utterly achievable.

And so on Sunday August 24 we’ll be heading back out to Warburton to do the ride again, hopefully with a very large group of people. The ride, Ol’ Dirty, is being organised by Hells 500 and more information will be available on the group’s Facebook page in the coming weeks.

Thanks for reading and I hope to see you out there then!

The video below was shot during the ride using a Shimano CM-1000 Sports Camera, except for the final two shots which came from an iPhone 5.

26 Replies to “In search of snow: a Donna Buang winter ride”