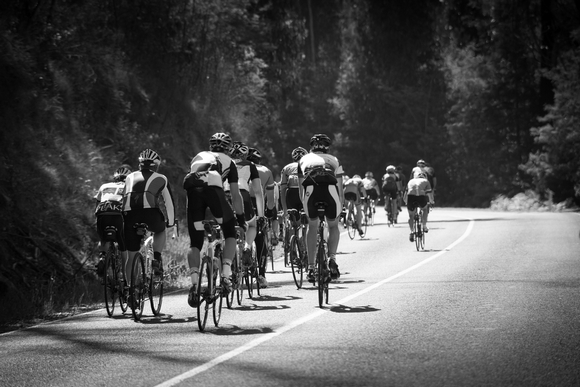 It was only a couple of days before Saturday’s ride that I started to get excited. There’d been so much to organise, so many pieces of the puzzle to pull into place, and it was only when everything was sorted that I had to chance to sit back and think “Yeah, this is going to be pretty cool.”

Our Domestique 7 Peaks Series ride up Lake Mountain was the first in the series and being the closest of the 7 Peaks to Melbourne, it was likely to attract a decent crowd.  The number of registered riders increased every day in the lead up to the event until, the night before the ride, we had more than 500 riders signed up. This was going to be huge.

With the ride scheduled to begin at Gallipoli Park in Marysville at 9am on Saturday morning Andy, myself and our amazing team of volunteers rocked up just before 7.30am. My dad Ron and I had camped just outside Marysville the night before which meant the drive to the start was only 5 minutes, rather than 90 minutes.

Given it was the first ride in the series I was expecting the set-up and preparation to be largely disorganised. But to my surprise and delight, everything ran very smoothly and before too long we had three tents, a merch stall, a food and beverage stall, a PA system, traffic marshalls and more set up and ready to go. All we were waiting for was the riders.

Between 8am and 9am riders started to trickle into Gallipoli Park but it wasn’t until 8:45am or so that the full size of the event became clear. There were riders everywhere and trying to get a sense of exactly how many we had proved impossible. 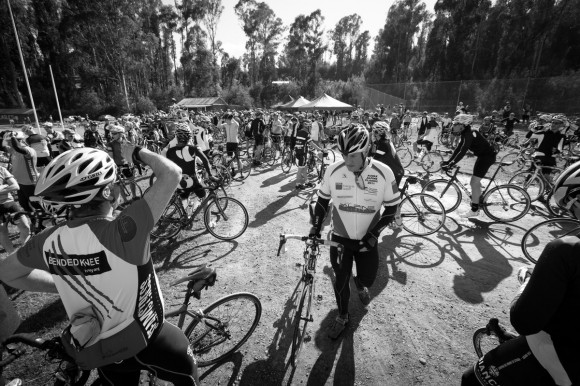 A touch after 9am Andy and I gave a quick pre-ride briefing, including a guest appearance by Tourism North East’s Steve Plummer, and shortly after that we started sending riders off. As per a Victoria Police/VicRoads request we sent riders off in waves of 15 a couple minutes apart and before too long everyone was on their way up the 20km climb to Lake Mountain.

I waited until the very end, chatting to a few people here and there before setting off for the climb.

A couple weeks earlier, at Mt. Buller I’d struggled mightily on the climb. And the week before Lake Mountain, I’d been in similar difficulty on the climbs around Mt. Macedon. So I was a little apprehensive about how I’d go at Lake Mountain, particularly on the steep stuff at the start.

But with the morning going as well as I could have hoped, and with everyone seemingly enjoying themselves, I found myself buzzing as I turned right at the roundabout to start the climb. My plan was to find a comfortable rhythm on those steep first 4.5km and then see how I felt after that.

Soon after the start the current Strava KOM holder for Lake Mountain, and recent Search2retain signee Brendan Canty flew by me at an incredible rate of knots. He had been non-committal at the start when I asked him whether he was going to try and better his last effort up there, but judging by the speed he passed me at, he was having a crack. It was quite amazing to watch.

I reached the top of the steep stuff, clicked up through the gears and got comfortable on the easier gradient. One of my favourite things about these Domestique 7 Peaks rides is getting to start towards the back and push myself up through the field, saying hello to as many people on the way as I can. With several hundred riders there on the day there was no shortage of people to say g’day to and to inspire me onwards.

I felt fantastic. It seemed odd to think that I’d been sick for so long — I felt as good on a climb as I ever have, even though I’m still carrying a few extra kilos. Must have been the new wheels.

As the closing kilometres of the climb approaches I realised I was probably on target for a PB. I kept pushing as hard as I could, spending several stretches of the climb in the big ring, forcing the pace.

I rolled into the Lake Mountain Alpine Resort in just over 1 hour and 6 minutes — roughly 40 seconds faster than my previous best. I’m very keen to head out there again in a couple months time to see how well I can go when I’m much fitter. 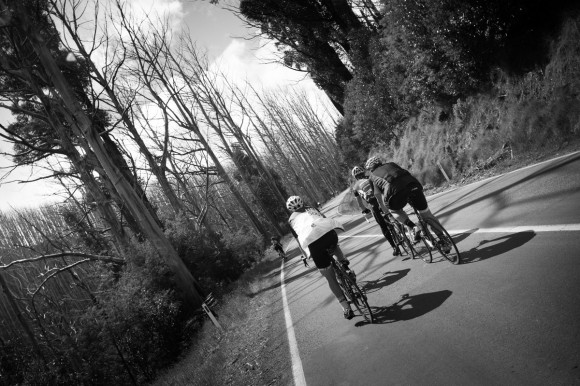 The buzz at the top was incredible. There were riders everywhere and it was packed inside the cafe. The queue to get food and coffee was almost out the door but as far as I could tell everyone seemed to be in good spirits.

I hung around for a while, chatting to people I knew, and to some I didn’t. It’s always great to see familiar faces at events like these, but it’s also heartening to see new faces; people who have come along to a Domestique 7 Peaks ride for the first time. We hope they’ll come back!

The descent off the mountain was terrific: fast, flowing and with barely any cars around. In fact there’d been so few cars throughout the whole ride you’d be forgiven for thinking we had a closed road. Most of the cars that headed up the mountain were with our entourage.

Where the Lake Mountain cafe had been pumping, the Marysville Bakery was just solidly busy. I suspect it was quite a bit busier before I got there.

After something to eat and after more conversations with more familiar and unfamiliar faces, it was time to pack up the show and head for home. In a ride that took several months of planning and that attracted between 400 and 500 riders, it was so great to see that there were no major issues, logistical, mechanical, medical or otherwise. It’s a trend we’re more than happy to continue for the rest of the series! 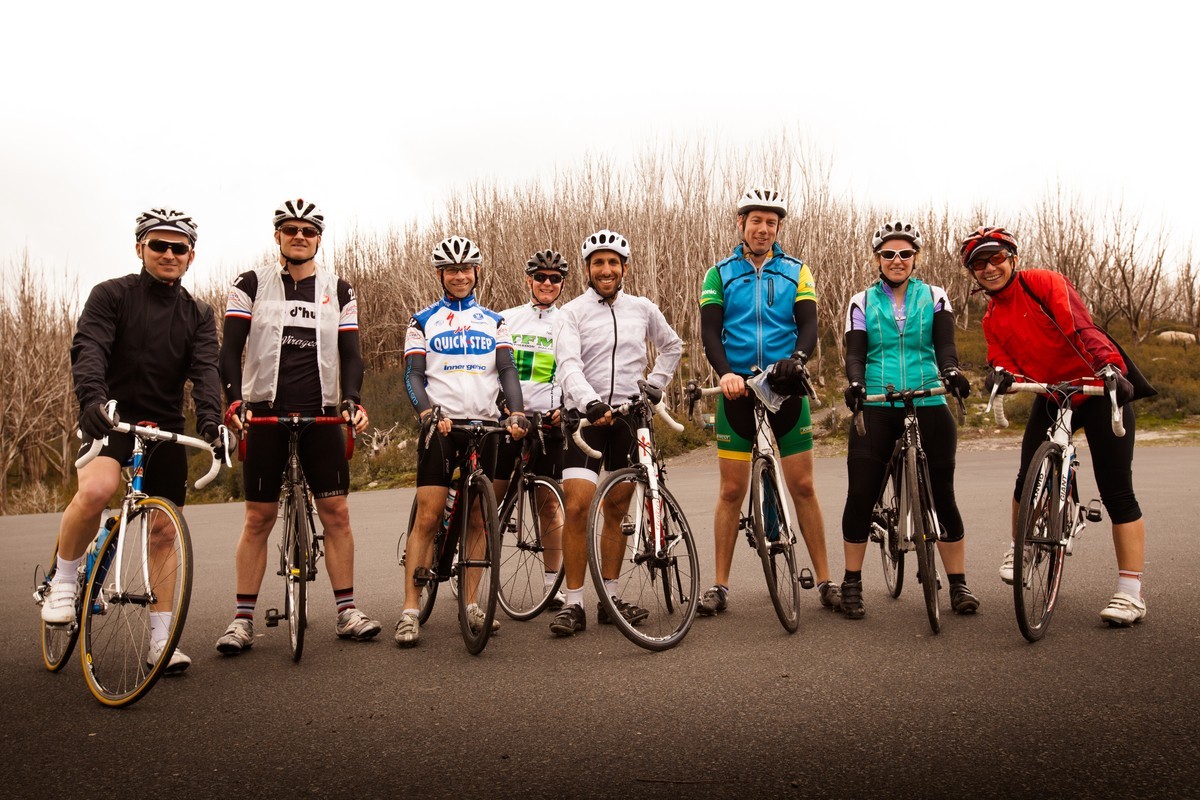 There were many inspiring efforts on the mountain on Saturday, from riders of all abilities and both genders. At last year’s Lake Mountain ride we saw the Strava KOM fall (to Brendan Canty) and we’re delighted to see that both the KOM and QOM fell on Saturday as well.

Brendan Canty, whom I’d seen fly by at the start of the climb, pumped out an amazing 47:27 effort up the climb — four minutes faster than his effort last year and more than seven minutes faster than the next fastest rider on Strava. It’s going to be terrific to see how he goes at the Tour of Bright in a couple weeks’ time.

Meanwhile Penny Brown was taking out the QOM in a fantastic time of 1:03:06. Penny gets special kudos for heading down and doing the climb a second time! 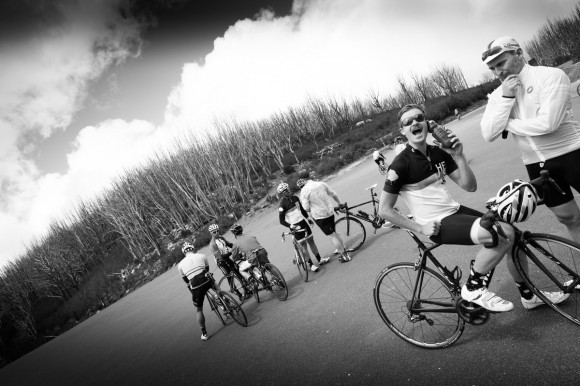 And it wasn’t just the fastest riders that were inspiring. We were particularly inspired by Dale’s efforts at the back of the field, persevering with great tenacity to conquer the climb. Awesome effort Dale! But our CyclingExpress.com voucher for the most inspiring effort of the day goes to Donna Innes-Wardell.

In April 2012 Donna had an accident while participating in a race at Crib Point. Another cyclist cut in on her and knocked her off her bike with another rider riding over her ribs. She was taken to the Alfred Hospital with three broken ribs, seven fractures of her pelvis, chips to two vertebrae and her coccyx.

She spent 13 weeks in hospital and had to learn to walk again. She started her rehab in July 2012 and was able to get back to racing in April 2013. While in hospital laying on her back she read about the 7 Peaks series and made a promise to herself that she would take part this time around. Lake Mountain was her first mountain climb since the injury. 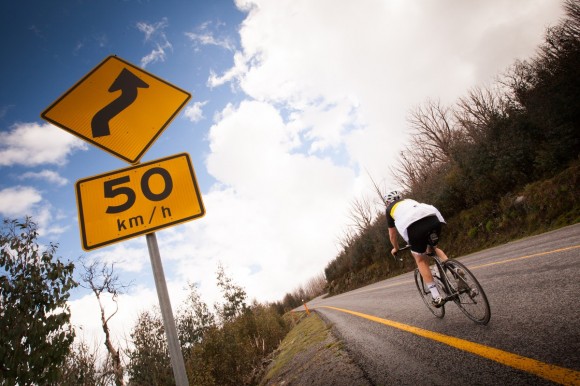 Of course an event like this simply wouldn’t happen without the support of a great team. We’re lucky to have some amazing volunteers to call on and they did a great job on Saturday, as they always do.

And given the Domestique 7 Peaks is a series of free rides, we’re extremely grateful for the support of our terrific sponsors. Thank you to all of the following: 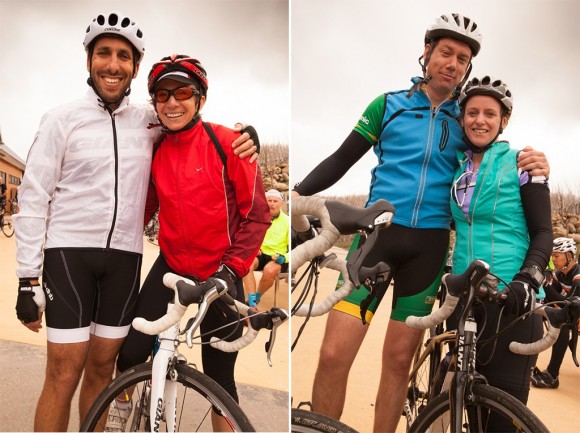 A big thank-you as well to the lovely Kirsten Simpson who took the wonderful photos you see in this post (and plenty more!) Kirsten has made low-res versions of all the photos from Saturday available free of charge at her website here. Just use the password “DomestiqueLM”. You can help support Kirsten’s great work by buying a hi-res photo or two for just $7.95 each!

And thanks to Shari Aubrey for organising special jerseys for Andy and myself in thanks for pushing to get 100 women at Lake Mountain — the gesture really means a lot!

And finally, thanks to every single one of you that turned up to the event. It was so heartening to see so many people turn up for a ride that Andy and I had invested so much time and energy in. You never really know in the planning stages how an event that size will turn out, but on reflection I don’t think we could have been happier. Thanks for being part of it! 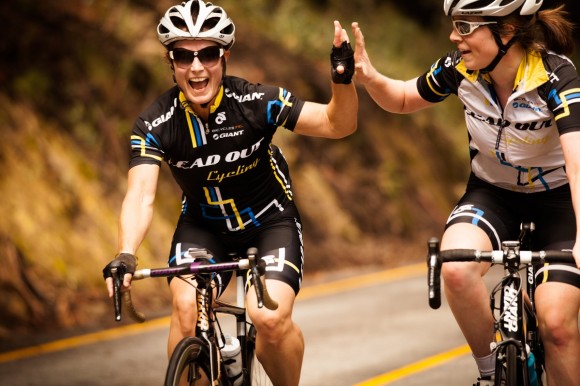 The big question is: what are you doing on Sunday December 8? We’ve already got 150+ signed up for the second ride of the series at Mt. Baw Baw and we’d love for you to join us. Sure, it’s a challenging climb, but with hundreds of others around you, and a commitment from us that no-one gets left behind, what are you waiting for?

Click here to check out another report from the day, by Michael at BRB Cycling. If you’ve got a report or other content from the day you’d like to share, please get in touch!

If you’d like to see a list of finishers from the ride, click here. If your name is spelled incorrectly you should have written it more clearly for us! If you’re one of the many people that didn’t write their name on the list (we reckon there might have been about 50 of you) please get in touch.