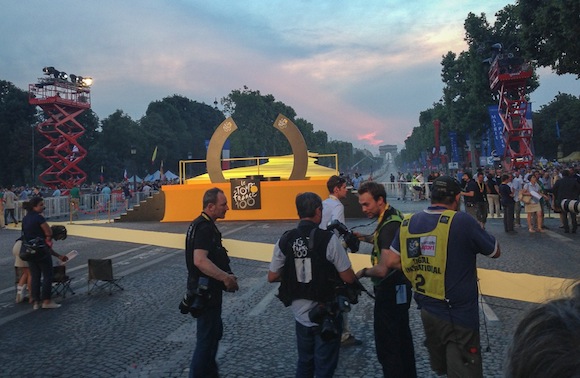 It’s been a week and a half since I got back from the Tour de France and I’m still recovering. The jetlag knocked me around more than I was expecting and, as always seems to happen after a period of intense concentration or stress, I got sick as soon as I got home.

Before today I’d only been for one ride since getting back to Melbourne, a cruisy 40km spin to Arthurs Creek with my brother Brendan. That night my legs were sore like I’d ridden 140km, and I reckon even that easy ride set my recovery back a few days at least.

Today I managed to get out for another ride with Brendan — a cruisy 75km jaunt that included a lap of Yarra Boulevard and a spin down the Eastern Freeway bike track. I wasn’t feeling great so I turned around at Donvale and headed for home while Brendan continued on to do some hills around Warrandyte. The few short hills I’d climbed to that point had knocked me around far more than they should have and as much as I wanted to continue on it seemed like a bad idea. I took it really easy on the way home.

Despite feeling sick and slow during the ride and despite having to cut it short I had a great time. After a week off the bike it was great just to get out and turn the legs over, even in the freezing cold.

I’m hoping that I haven’t made myself any worse by riding today — I don’t really want to be sick for another week. And perhaps more importantly, I want to be right for next weekend’s Donna Done Dirty. Last year’s edition was one of my favourite rides of 2012 and I’m looking forward to the 2013 edition next Sunday. Hopefully there’s some snow this time around!

While I was at the Tour de France (for work) I managed to get in a surprising amount of riding. I put together six blog posts about the trip, including a whole host of photos that I’m quite proud of:

It was an amazing five-week trip with plenty of highlights — such as climbing Mont Ventoux, going behind the scenes with SBS and a going on an incredible ride with Jess MacLean and Gracie Elvin, to name just a few. But after an intense five weeks I’m also quite glad to be home. If only it were about 15-20 degrees warmer here in Melbourne!

So stay posted and until next time, thanks for reading!

3 Replies to “After Le Tour: looking back and looking forward”